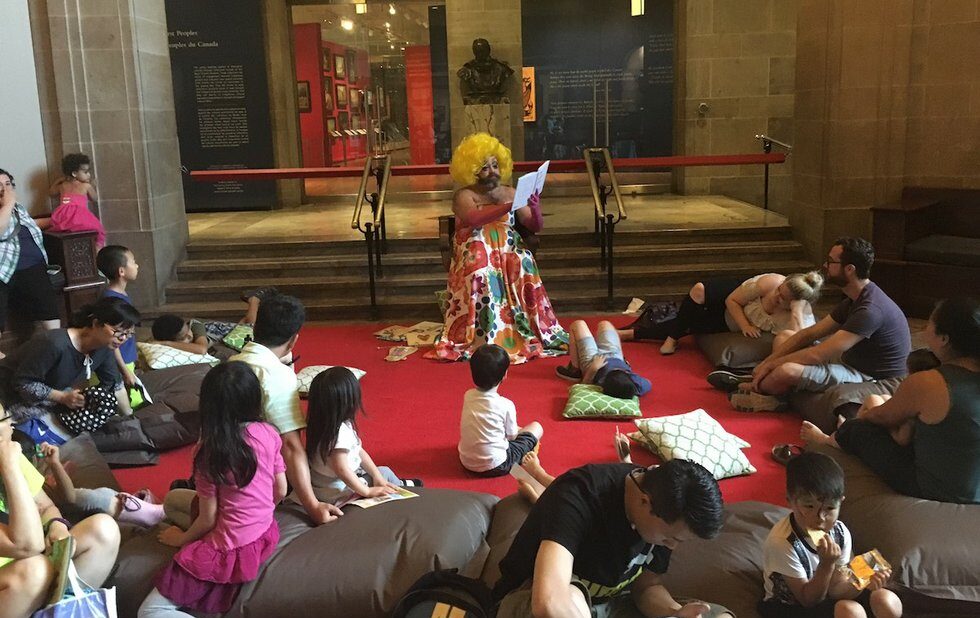 On the Sunday before Pride weekend, story time at the Royal Ontario Museum looked a little more glam than usual.

Drag queen Fay Slift sat in the rotunda bedecked in a voluminous yellow wig, a Marimekko-esque strapless gown, pink opera-length gloves and a beard, reading children’s books Not Every Princess, In My Heart: A Book of Feelings and The Book With No Pictures to families splayed on cushions.

The ROM is the latest venue in North America to host Drag Queen Story Time, an initiative that came to Toronto a year ago when Fay Slift (aka JP Kane, a kindergarten teacher for the Toronto District School Board) and Fluffy Soufflé (aka childcare worker Kaleb Robertson) heard about the inaugural Drag Queen Story Hour in San Francisco.

In conjunction with Glad Day Bookshop owner Michael Erickson, they had their first event at the Toronto Public Library’s (TPL) Yorkville branch. Jayme Sampa, manager of community engagement at the 519, then asked Fay Slift to read at two more events at the end of 2016.

“Its been a very popular thing over the last year or two at libraries in San Francisco, Boston and New York,” says Scott Robins, children’s services specialist at the TPL’s Don Mills branch. “Branches thought, ‘Hey, that’s a cool thing,’ and reached out to people in the community to develop events and source out drag queens.”

As the proliferation of LGBTQ clubs and parties once indicated the spread of queer culture outside the Church-Wellesley Village, the popularity of Drag Queen Story Times is drawing a new, family-oriented map of acceptance.

This year, Pride story times happening at the S. Walter Stewart, Jones and Spadina Road libraries will serve as a testing ground to see if the events can run year round.

“We have a huge LGBT population in the city,” explains Robins. “For the longest time, it was focused on a very specific neighbourhood downtown. Now there’s LGBT people across the city, and they’re creating their own families.

“At the same time, for people who aren’t LGBT, it’s an opportunity to learn more about the community and to experience the enjoyment of being around a 6-foot man dressed as an amazing drag creature,” he adds.

Beyond a fun activity for families, Drag Queen Story Time is also about visibility and aligns with the new Ontario sex-ed curriculum’s emphasis on different types of families and diverse gender identities.

As such, Story Times give children vital information.

“The younger we get these little kids embracing people’s identities, ethnicities and family dynamics, the more they are exposed to the fact that this is just another form of life,” says Kane. “As they age, they’ll be more vocal to stand up against acts of oppression against other groups.”

Fay and Fluffy are planning events in July with drag queen Tynomi Banks, and more readings will take place throughout the fall and winter at various libraries. They are also in talks with the Art Gallery of Ontario and other organizations.

Robertson admits Drag Queen Story Times have become trendy, but he doesn’t believe the events will disappear any time soon.

“It’s a trend like avocado toast,” he says. “It may be having its moment in the spotlight, but people have been doing events like it before, and when it’s no longer the subject of Vice shorts, people will still be doing it.”

In addition to Fay and Fluffy’s events, Breanne Gimza hosts the East Toronto Drag Queen Story Time. There was so much demand for the first event in April at a yoga studio that she had to schedule back-to-back story times in order to accommodate 120 ticket buyers. Drag queens Allysin Chains and Dottie Dangerfield sang the Beatles’ All You Need Is Love and Queen’s Crazy Little Thing Called Love and read titles The Colors Of Us and Zero.

“Clearly parents are looking for interesting things for their children to do that at the same time impart something meaningful in a safe place to express themselves,” she says. “There hasn’t been enough of that.”

On June 24, Gimza is taking the same format to the S. Walter Stewart library with queens Atmos Fierce and Erin B.

After that, Gimza’s next story time is part of a charity event for the New Mom Project, and she’s working with Leslieville’s Queen Books to host another event that will be free/pay what you can.