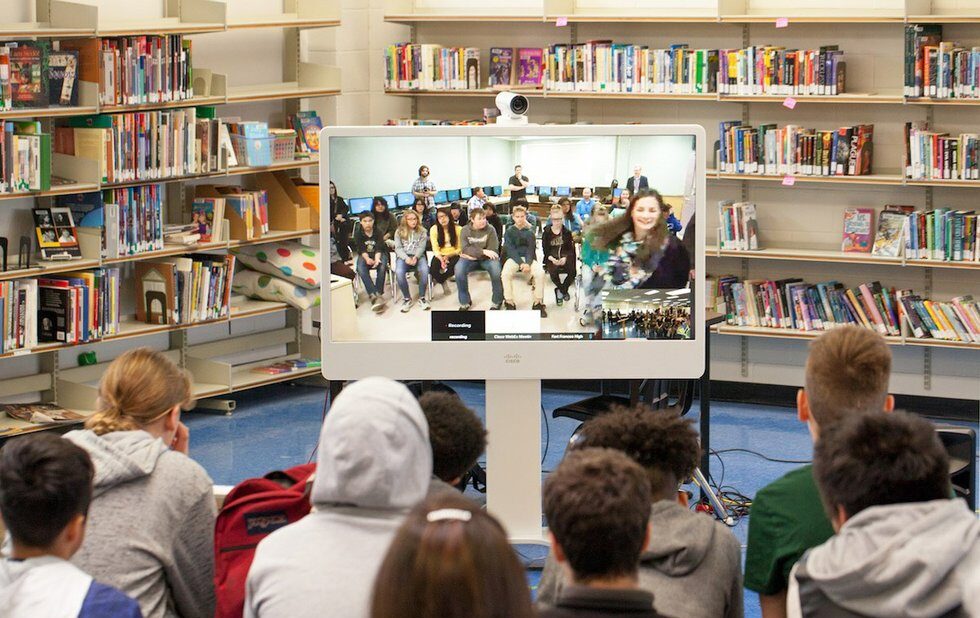 At the First Nations School of Toronto, 16 students sit in three rows facing a giant computer screen projecting a real-time video of a classroom in Fort Frances High School in northern Ontario. Grade 7 and 8 students from both classrooms are playing a game of What Animal Am I? in Ojibway.

Despite differences in dialect and the 1,726 kilometres between them, both sets of students look more or less the same – kids shuffling in their seats. After the game, speeches from assembled public officials ran too long for their (or anyone’s) attention spans.

The occasion is the launch of Connected North, a video conferencing program that gives students in remote First Nations and Inuit communities a chance to interact with their peers across the country.

The Toronto District School Board (TDSB) has become the first urban participant in the initiative, which launched in 2014.

The goal is to help Indigenous students in Toronto improve their language skills, share histories and stories with other communities and provide mental health support.

“I want to heavily encourage Native content,” says Jonathan Kakegamic, principal of the First Nations School. “We need to develop relationships with all these other communities because Treaty 3 [a sovereign Anishinabe Nation] is different from, say, Mohawk. The lifestyle, beliefs, culture are different.”

Funding comes from the Ministry of Indigenous Relations and Reconciliation and Ministry of Education. By the fall, 30 schools across Canada will participate in the program.

TakingITGlobal is still training teachers, but the plan is to incorporate Connected North into the curriculum from Grades 1 through 8. It also benefits the teachers, who are using the tool for training and development.

“When you ask the youth where they want to go – and through this technology, they can go anywhere – they say they want to meet kids who are ‘just like us,’” explains Willa Black, Cisco’s vice-president of corporate affairs.

Spadina-Fort York MP Adam Vaughan – dubbed the “Connected North Sherpa” by Black for championing the project at the federal level – believed in the program as soon as he saw a demo at Cisco’s waterfront technology lab.

“We also have responsibility as educators to develop a real history of this country, which involves making sure that all nations are represented in the stories we tell and that the connections between those nations are understood.”

In addition to the educational take-away, the technology can provide mental health support to communities with high dropout and suicide rates.

The program also offers teacher professional development sessions led by partners including Hinck-Dellcrest, a children’s mental health centre now operating in partnership with SickKids. Both SNAP and Hincks-Dellcrest are Toronto-based.

“The quality of the video feed and the audio is so good, you’re almost able to eavesdrop,” says Vaughan. “If [the therapists] see one of their kids looking vulnerable, they can take them into a separate room and do one-on-one counselling. They can provide distance support with culturally appropriate, well-trained individuals in the South or North.”

The next challenge for Connected North’s proponents is to access rural communities that don’t have high-speed internet connectivity.

In December, the CRTC declared broadband internet a basic telecom service. Currently, 82 per cent of households and businesses have access to at least 50 megabits per second for downloading and 10 mbps for uploads. The goal is to ensure 90 per cent have access to those speeds by 2021 and the rest within 10 to 15 years.

The sharing of cultures across geographic divides will help the First Nations School reinforce a strong sense of identity for Aboriginal students in Toronto and beyond.

“Two of the communities [in the program] are isolated. Some of those kids haven’t seen concrete sidewalks, let alone subways, and other things you take for granted that you see every day,” says Kakegamic.

“If the kids are engaged, it’s a success.”