Sage Paul needs a break from her computer to avoid a bombardment of emails coming her way.The fashion designer is. 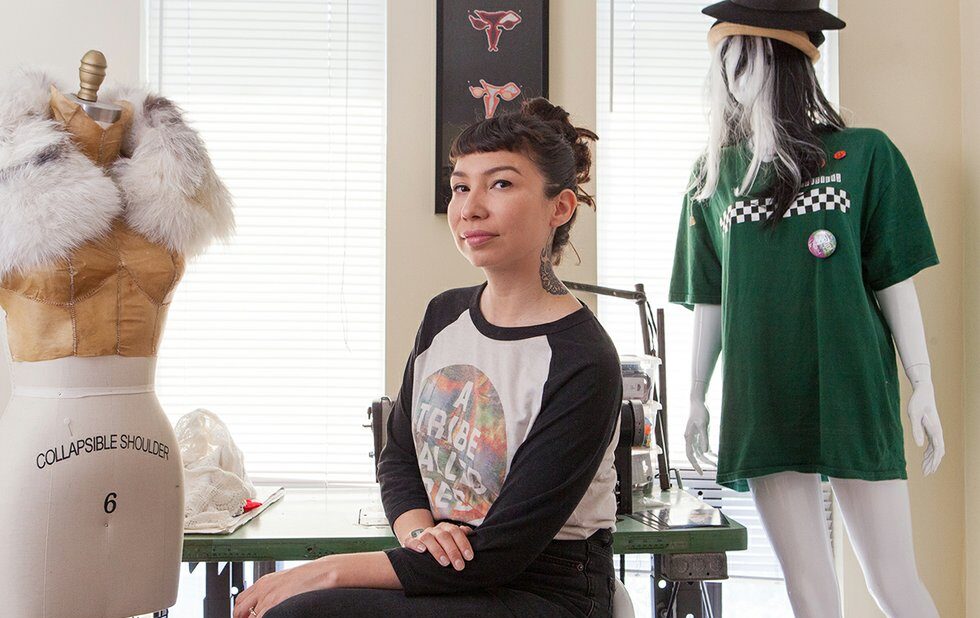 Sage Paul needs a break from her computer to avoid a bombardment of emails coming her way.

The fashion designer is organizing the inaugural Indigenous Fashion Week Toronto (IFWTO), which runs May 31 to June 3 at Harbourfront Centre, and features four fashion showcases (fusing fashion, theatre and dance), a marketplace with 54 vendors and panels about the state of Indigenous fashion. (See listing.)

Many of the emails filling up Pauls inbox are from people saying they didnt even know Indigenous fashion existed.

When I was in fashion school, I just didnt have a place to present my work. And the mainstream was very unattainable, she tells NOW. A lot of Indigenous art was being presented [in school], but I found that it was very tokenizing.

Not to discredit any Indigenous artists or designers who have paved the way for IFWTO, Paul says the industry and schools have more to do when it comes to emphasizing a broad array of cultural design traditions and holistic practices.

There isnt much space for anyone [in fashion], says Paul. You need access to a lot of resources finances, your location, connections and for a community like mine where weve come from a history of colonization, genocide, cultural genocide, we dont have access to what is required to make it in the fashion industry.

Paul first came up with the idea for the event while completing a diploma in fashion design and techniques at George Brown College more than a decade ago. Talking with Indigenous designers, she wanted to make a space to present Indigenous creations and discuss them.

Torontos had a number of fashion weeks, but this was the first time I felt really compelled to be a part of one, and I think its because the cultural connection, says designer Warren Steven Scott, who is showing during IFWTO.

His collection is inspired by photographs of Indigenous people on reserves in the 1950s-80s. The pieces include fluid peasant dresses and skirts, with lots of layering. Hes also created jewellery based on Coast Salish designs, inspired by his West Coast background.

A recent graduate of Ryerson Universitys school of design, Scott learned about garment construction, but other aspects of his work were self-taught.

As designers, especially when you have 60 students a year going into fashion, you need to learn about cultural appreciation and design of every culture, he says.

Ryerson is among the fashion/design schools attempting to Indigenize curriculum. In 2016, Riley Kucheran, a Ryerson and York University PhD student in communication and culture, organized an event called Fashion And Reconciliation and booked Paul as a guest speaker.

He believes that Indigenous designers have so much to offer consumers and Canadians, more than the fast fashion produced by factories and companies overseas. With Indigenous designs, the materials and labour are often coming from within their communities.

Canadians have deliberately been misinformed about our culture for so long. Its [seen as] a costume for most Canadians, he says. Indigenous designs are inherently better for consumers because theyre intrinsically and holistically sustainable.

Paul also wants to keep cultural garment-making traditions alive. [Its about] carrying on generations of knowledge, ensuring that were revitalizing practices of weaving and dyeing that could be lost through colonization.

Kucheran, who is moderating several IFWTO panels, has helped Ryerson Indigenize its Fashion Concepts And Theory course, with two weeks on cultural appropriation and Indigenous speakers. That course was the seed for further examination of the programs curriculum.

Ben Barry, the new chair of Ryerson School of Fashion, is really committed to decolonization and centering the land in everyones designs, not just Indigenous designers, he says.

Kucheran believes fashion will be integral to an Indigenous cultural resurgence and include luxury products. Hamilton-based Cree-Metis designer Angela DeMontigny has set that precedent, having shown her high-end, 100 per cent Indigenous designs during London Fashion Week.

When I think about Indigenous design, its from the whole supply chain the hunter who gets the hide, the artist, beaders and seamstresses, Kucheran says. It can support an entire community if we get Indigenous fashion right.

It could do a lot more for a resurgence than selling our land for oil pipeline rights, he adds.

Teaching new ways to look at luxury or supply chains is what many are advocating for, since even the recent graduates NOW spoke to hadnt learned anything about diversity or Indigeneity in their courses.

We were taught only one way mass producing for a fashion house and only one way of being a designer, says Paul. Anyone can design a white T-shirt or pair of pants. But what about the meanings and purpose [of clothes] beyond design and function? School is one of the best places to focus on that. I wouldve liked to see hide-tanning or bringing in Indigenous people to speak.

Another benefit of schools and industry Indigenizing fashion is that it could stop or at least curtail cultural appropriation on runways. Paul says thats another good reason for the existence of IFWTO.

Designers who are appropriating our culture are not working with us in a way that allows us to represent ourselves, she says. To not include us is erasing us from our own narrative.

Its not our place to teach people what they can and cant do, but were in a position now where were allowed to practice and be Indigenous. I hope IFWTO will bring people together to understand who we are, the work were creating and where our designs are coming from.