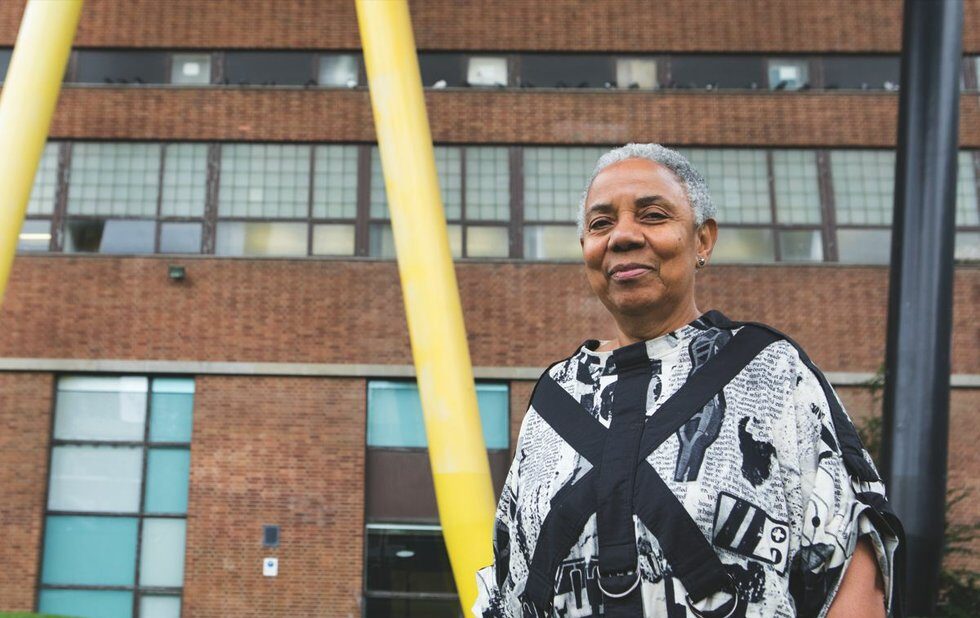 Lillian Allen is about to fly to Belize, but before she begins her night-before-an-early-flight preparations, she is passionately discussing how her spoken word and dub poetry background – her albums have won two Juno Awards – are fusing into a new program.

Next September, OCAD University is launching its first four-year Bachelors of Fine Arts program in creative writing, which will pair writing with art and design studio classes.

“Ironically, most creative writing programs include various genres of writing, including sound poetry, but nothing that acknowledges, focuses and elevates the forms of spoken word, dub poetry or hip-hop,” says Allen, who has taught at OCAD since 1992.

Headed up by Allen, the program will feature written, performance, digital and visual expression (using language to interact with or create visual forms). She has wanted to start a program like this at the university for a while, and for a few years has been working with assistant professor Catherine Black to see how people are using spoken word to build communities and in arts activism.

“Spoken word and hip-hop are where young people are coming into their voice and figuring out what is important and what they want to say,” says Allen. “It seems obvious for an arts school that we should tap into this creativity and help to ground it and enrich and guide the cultural context. It’s one of the most vibrant forms of community engagement, of art and creativity that is happening not just in cities, but worldwide.

“It hadn’t been anywhere in academia and we wanted to bring that diverse form of knowledge, aesthetics… that vibrant energy with words and live language into our creative process,” she adds.

Allen says that you can hear that the rhythm and cadence of spoken word has seeped into many forms of writing, and cites the hit Broadway show Hamilton as an example.

“In this disciplinary milieu, which OCAD has evolved toward, language is the most malleable of all materials,” Allen says. “We want to see how that works with combining traditional poetics and traditional forms with new and emerging forms across disciplines.”

The program will be tailored to students’ interests, and includes opportunities to create via online and print journals, public performances, university slam poetry teams, workshops and more.

Courses cover a range of topics, from art history, research and editing to dub and spoken word poetry, Indigenous literature and social studies.

Students will also work with gaming and technology to inspire a whole world of creativity.

“If there’s one form that can work with any art form you can imagine, it’s the language-based form. You hardly see any artwork these days without writing involved. It’s also the way we’re guiding the program.”

The professor says they’re hoping to have 40 to 50 students in the first year.

“Nobody’s going after who we’re going after, and nobody’s offering what we’re offering,” she says. “There are groups of people with a writing practice, young people from racialized communities – we’re going for those folks with lived experience, those who have pursued other kinds of professions. We want to hear those stories.”

In addition, Allen wants to attract the people who participate in spoken word events, want to develop their work and wouldn’t normally think to do that in a university setting.

She also wants to nurture people who need to take a few years to work on fiction or non-fiction writing, and be in a creative space with others.

Students straight out of high school will mix with people already working, performing and publishing but who need the “intellectual rigor and a community of ideas they can keep working with.” As she points out, “the lone person in a room creating a masterpiece doesn’t exist any more – if it ever did. Writing can come alive in the community.”

Allen is currently looking to hire instructors and promises to “pull from the richness of Toronto.” The aim is to have visiting artists and mentors from the community who are engaged in local, national and international projects. Students will have an opportunity to work in Belize as well, as Allen is the co-founder of the OCAD U Belize Project, an international community arts and design project.