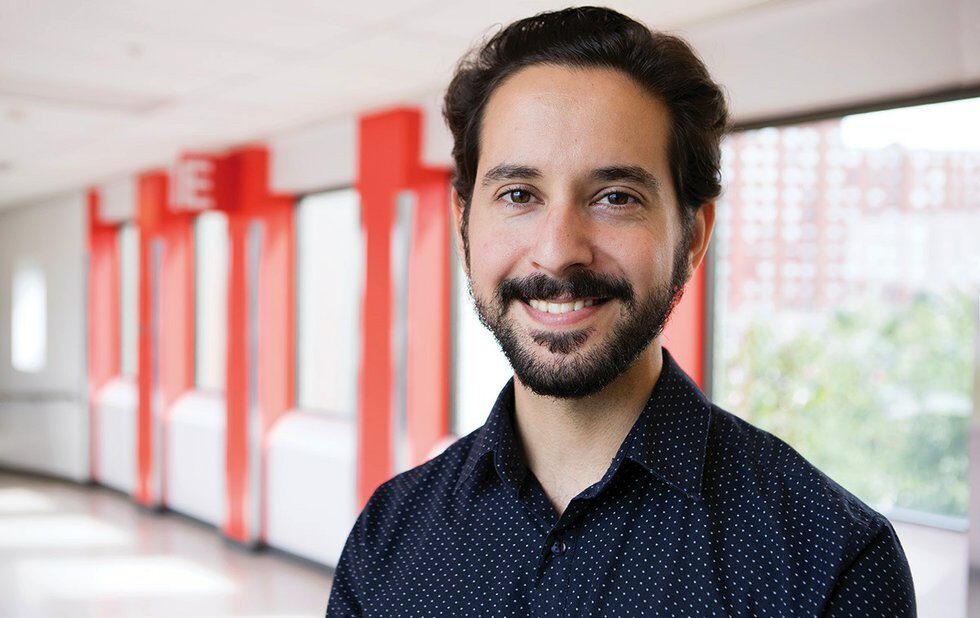 Indie musician and college instructor Matt Russo has translated the movement of a planetary system into music.

Musicians have often taken inspiration from the stars – from David Bowie’s Starman to the Weeknd’s Starboy – but Seneca College professor of astronomy Matt Russo has taken that relationship a step further. He’s translated the movement of a planetary system into music.

TRAPPIST-1, a red dwarf star, was discovered in 1999 and has seven planets orbiting it. Together, the  planetary system moves in an “orbital resonance” – the lengths of the planets’ years are related to one another in whole-number ratios, and Russo has applied those ratios to music. He’s performed his musical composition solo in a TEDxUofT talk, and at events like Astronomy on Tap TO at the Dunlap Institute for Astronomy and Astrophysics.

This October, Russo and his indie pop band RVNNERS bring some of the music composed by the planetary systems to the Jasper Dark Sky Fest. As well, a new college course he co-created, Music Of The Spheres, launches this month at Seneca.

How did you come upon the musical side of the new planetary system?

For most of my life I was torn between these two worlds – music and arts, and astronomy and math. When they discovered TRAPPIST-1, I was nearing the end of my post-doc and had no idea what I was going to do next. It just so happened there was a celestial sphere on one side of my head and a bust of Beethoven, and I was right in-between. I got the idea to translate this system into music. I saw the musical patterns and I realized somebody had to find a way to hear this music.

What does it feel like to bring both of those interests together in a college course?

It’s completely fulfilling for me, using such a wide variety of disciplines, skills and knowledge. I’m hoping the students will enjoy integrating many aspects of the world into a single project instead of keeping them compartmentalized.

How will Music Of The Spheres be taught?

Every week we’re going to have a short introductory lecture, introducing the new topics. The second half of the class, all of the students will be on their computers. They’ll be working on their own projects, choosing some kind of astronomical system and figuring out what kind of music they find there and how they want it to sound. It’ll be a lot of music, astronomy, computer coding, music production, mathematics.

At the end we’re going to have a public concert where they perform or present their composition to the class and the public. A lot of the work I do is in collaboration with the Canadian National Institute for the Blind and the Canadian Council of the Blind, and we’re going to invite a group from those institutions to experience the sounds of the universe that the students were able to create.

Was it difficult to put your discovery into a college course format?

I don’t think anyone’s ever done this before, at least in the modern world. There’s no precedence I can look at and copy – I had to build this course from the ground up. Last year I taught a standard intro to astronomy course and started working in my musical representation as another way to engage the students, and they responded so enthusiastically to it, I knew that I had the hook for the whole course there. I developed the course over three months with another astronomy professor at Seneca, Maia Nenkova.

What do you hope the takeaway will be?

Two goals I’m going after is, one, giving them generalizable skills to tackle new projects, using computers for instance, and applying that to whatever work they end up doing in the future. The other is just to give them an appreciation of the scale and the beauty of the universe.

Do students need astronomy or music knowledge going in?

That sounds challenging from a professor point of view.

It is, but the courses are relatively small – capped at 35 students – and they’ll be working on their own projects so we can really tailor the complexity to each student individually.

How does enrolment look?

It’s just under capacity, 32 out of 35, and there are still a few more weeks.

Want to make this a returning course?

Absolutely, this is my dream course, so if I can get the students half as excited as I am, we’ll keep this going as long as we can.

Why do you think STEAM (science, technology, engineering, arts and math) is important?

To me, it’s all about having a broad and global perspective instead of focusing on narrow skills. [STEAM is] more focused on integrating practical skills and topics from the humanities – combining the scientific methodology and world view with the humanistic view encapsulated in the arts. It’s really about developing a complete citizen of the universe.