Design students team up with the Regent Park Sewing Circle 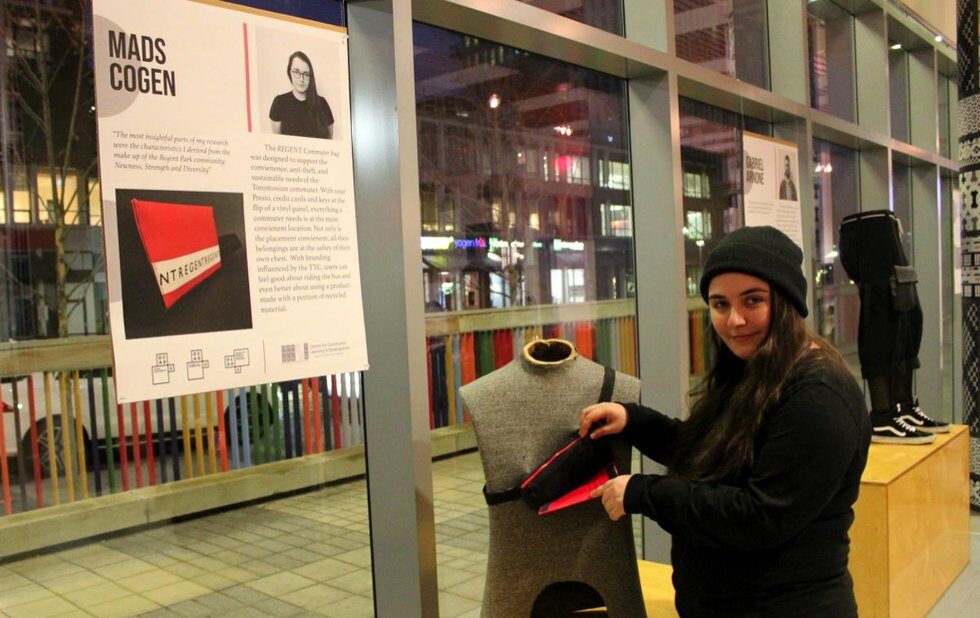 OCAD University industrial design student Mads Cogen thought about the entire TTC commuter experience when she collaborated with the Regent Park Sewing Circle on her REGENT Commuter bag. With the name of the neighbourhood emblazoned across the white and red vinyl flap concealing a Presto card, keys and credit cards, the soft-touch design aims to make subway experiences easier – and more stylish.

The bag came out of an OCAD U industrial design course called Identity Materialized, which brought 16 students together with four women from Bangladesh, Sri Lanka and Iran at the Regent Park Sewing Circle.

The idea was to give second-year students experience in participatory learning, and for the sewing circle to come away with patterns for new things to sell – such as basketball bags – based on the collaborative designs created in the course.

“The goal was for the women to have new designs for bespoke, high-end, well-made, one-of a kind products,” explains Faculty of Design assistant professor Ranee Lee, who championed the initiative. “The idea is to elevate their work to more than just average sewn products – kind of like a one-of-a-kind suit.”

In addition, it wound up bringing together some students and the sewing experts into a surrogate family. While only one student took the opportunity to learn how to sew, the course allowed for the students to gain a better understanding of what life is like in Regent Park.

“I think the negative perception that people have about my neighbourhood, Scarborough, is the same way that people see Regent Park,” says student Sydney Cooling-Sturges. “It made me see that I’m just as prejudicial as other people.”

This is the first time that a second-year industrial design course was held completely off-site. Students spent three hours a week for 12 weeks with the women at the Toronto Centre for Community Learning and Development (TCCL&D).

“The whole idea of participatory design is how the women and students were teaching and learning from each other every week,” says Lee. “I think I’ve set a bar with this class. A lot of the designs that came out of it were really thoughtful, and I think that’s due to the participatory nature.”

Prior to the partnership with TCCL&D, industrial design students worked with another sewing collective at the nearby Yonge Street Mission, but spent most of their time in class. Only presentations were held off-site, an approach Lee now realizes wasn’t equitable for community participants.

“A lot of the women from last year didn’t go outside their own neighbourhood,” says Lee, resulting in the sewing partners not feeling truly comfortable. Having faculty and students go to Regent Park for every session provided a much better experience for this year’s participants. Next fall, Lee plans to go completely off-site again.

“If it wasn’t off-site, the women would only come to OCAD at the very beginning for consultations and then at the end when the students are presenting,” says Lee. “A lot of the thinking process happens in the middle, when the women are with the students – the interweaving and exchanging of ideas.”

Cooling-Sturges, agrees the time together was integral to the design process. She originally wanted to make an anti-fatigue kitchen mat after hearing that the women spend hours standing in the kitchen cooking. Her mat was going to be woven – until one of the women asked how she would wash it. The student hadn’t considered that.

That interaction informed the final design: a water-resistant drawstring bag with a removable woven net.

“[The course] reminded me that I’m designing for people,” says Cooling-Sturges. “Our program is so much about how people are going to interact with your product and why people are going to see it as beneficial. Listening and learning from these women was really important.”

Cooling-Sturges also took the opportunity to learn how to sew from the group (knowing how to sew isn’t a prerequisite for the course), which became a bonding experience.

“It was probably intimidating for them in that we were a bigger group than them, we had an age difference, a language barrier,” she says. “I learned about them, their kids, what foods they like to make, and at the end of it, one of them referred to herself as my surrogate mom.”

In addition to functionality, locality is important to the design process, says Lee.

Students asked people in Regent Park about their perceptions of the neighbourhood, and studied symbolism, historical context and more.  “They had to look at how their design represented the place,” says Lee, adding that locality reflected in the choice of material – fabric and soft-goods.

Shahrzat Sadeghi, a sewing collective member from Iran, has made it all. In an interview, she rattles off a list of garments she can make, from wedding dresses to baby clothes. She liked the students’ designs and ideas and would participate again.

She sells her wares at a monthly market at Regent Park where people buy tote bags, aprons, coasters, placemats and yoga mats. She was an active participant for three of the early OCAD sessions, and was particularly impressed with a student who designed a placemat that was “like an art piece.”

“It was a beautiful design that could be used for tote bags and clothes,” Sadeghi recalls. “It was a small collage made from small pieces of fabric – these days we don’t really use small pieces – so it was really unique.”

On December 6, the course ended with a sewing corner, an exhibition and (sold-out) sale of the student projects at Daniels Spectrum. Items included a kid’s basketball bag, a Regent Park-inspired baseball cap and a transit rider bag.

Next time, Lee plans to have better communication with the sewing group women – only a few appeared at different points at the exhibition and sale where they could’ve sold their own goods. “It would’ve supported the women financially, which is what would’ve made this project come full circle.”

According to Sureya Ibrahim, TCCL&D’s community relations specialist, the women of the sewing circle are currently making more of the soft goods designed by the OCAD class.

Re:Location designs will be on display at OCAD University’s Great Hall (100 McCaul) as part of DesignTO. Opening reception takes place on January 22 from 7 to 9 pm.