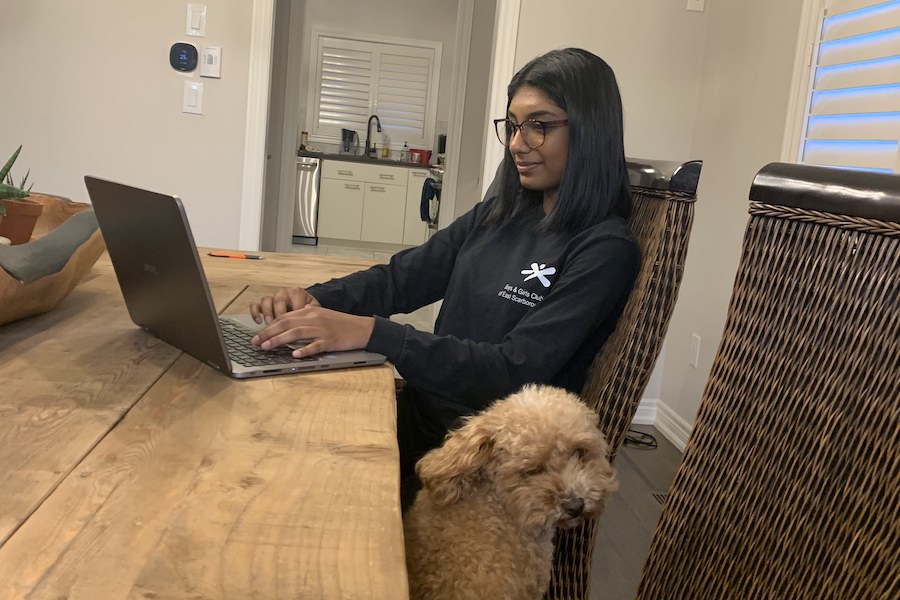 Yazmyne Jeganathan keeps up with virtual learning from home.

Ontario post-secondary students have pivoted to virtual learning in the COVID-19 era.

They’re saving time on commutes and perhaps even cash by living at home.

But they’re also coping with technical glitches, new class structures and a virtual learning educational environment that is taking some getting used to. Attending class online means less interaction and they’re listening to lectures with their pillow just a few feet away.

Some love it and some hate it. But this may be the new normal for post-secondary education for some time. Last week, Ryerson University announced the majority of classes will remain online for the winter 2021 semester.

The following conversations have been condensed and edited for clarity.

So how are we finding virtual learning?

Yazmyne Jeganathan: Honestly, I hate it. I’m dying to go back to physically being in school in front of a teacher and in that environment.

Skyla Baker: I love going to school. The switch to online learning was a weird turnover that no one was really prepared for.

Brandon Hughes: It’s been a good experience. I have about a 90-minute commute from Oakville into the city on the GO train and then the subway. Working from home has been awesome for me. I’m not getting home at 11 pm. I can be here for dinner. I really have no complaints.

YJ: I like separating my school life from my home life. Being at home is very frustrating in that sense. There’s just so many distractions. It’s just so hard to stay focused. You can still use study spaces at the school, but the times are restricted.

BH: You have to be twice as organized. And you need to be a little more tech savvy with your organization. There’s just so many dates. So many little things that are due.

Do you feel like your education is suffering in this format?

YJ: There is a live teacher for three of my classes. And for two of them, it’s a recording. Curriculum wise, it’s honestly the same.

BH: A lot of it is content heavy. You’re looking at PowerPoint slides. Even if a professor was going through them in a live lecture, you’re not getting that much more.

SB: It’s still a lot of self-taught learning: “Here’s the material, go do it.” It’s also like that in person, but online there’s so much more expectation on yourself to do all the work, stay focused and build a schedule.

A lot of the classes were in-person lectures for 90 minutes twice a week. Now we’ll have a lecture once a week for an hour and you can’t really ask questions.

YJ: You can’t just ask a question anymore. Now you have to formulate an email; a very well put together and respectful email, asking [the instructor] how their day is going.

BH: At least for the early portion of this semester, the professor has been dealing with a lot of technical issues. It’s been taking away from our class time.

SB: In my last lecture, my prof disconnected five times because of internet connectivity. So 100 people were in the chat like, “I can’t see you.”

BH: In fourth year, there’s importance placed on group work. There are a lot of people adapting to using different technologies. We use WhatsApp for a lot of group things. But some people prefer to use Facebook or Google Chat. It’s just manoeuvring around what everybody is comfortable with and trying to find a good medium.

During class, they divide everyone into little groups in breakout rooms to discuss a case study or exercise questions. Sometimes you go into these breakout rooms and it’s absolutely crickets. There’s eight people, but it’s just you and one other person speaking. There’s no accountability to have to speak until the professor pops in. For 15 or 20 minutes it’s just silence in the group until the professor arrives.

SB: When the school switched to online learning, one of my classes had to cease and desist. It was a journalism class, where there was studio access and AV equipment. The use of that equipment was one of the reasons I went to the University of Windsor. I was running the teleprompter, making sure all the cameras were good and checking all the mics before we started filming. We all had to go home because we couldn’t access the cameras and equipment.

I’m in my fourth year, so I won’t get that aspect of it now. We’ve gone online this semester. Now they’re having us do interviews from our own houses, writing newspaper pieces, which I’ve been doing for years.

You’re working as a journalist the way most journalists are working during this pandemic.

How is this studio class going to shape up?

SB: I don’t even know yet. I got an email from the professor in the first week saying that we would hear from him when he knew more. That hasn’t happened yet. I love my professors. And I love my program. But this has been a wacky year. It’s a learning curve for everybody.

BH: The professors have done a great job. Just because they’re professors doesn’t mean they are the most tech-savvy people. But navigating through Zoom, they’ve done a really good job.

In my personal situation, these are little hiccups. It’s something that we have to get used to. And it’s going to be a big part of the future in the way that we work. We were slowly moving in this direction before. We were shifting towards this. COVID thrust us quicker into the remote learning and work dynamic.

Back to School covid-19 virtual learning