Mohamed Lachemi says the university has not made a decision about the removal of the Egerton Ryerson statue, which activists covered in paint over the weekend 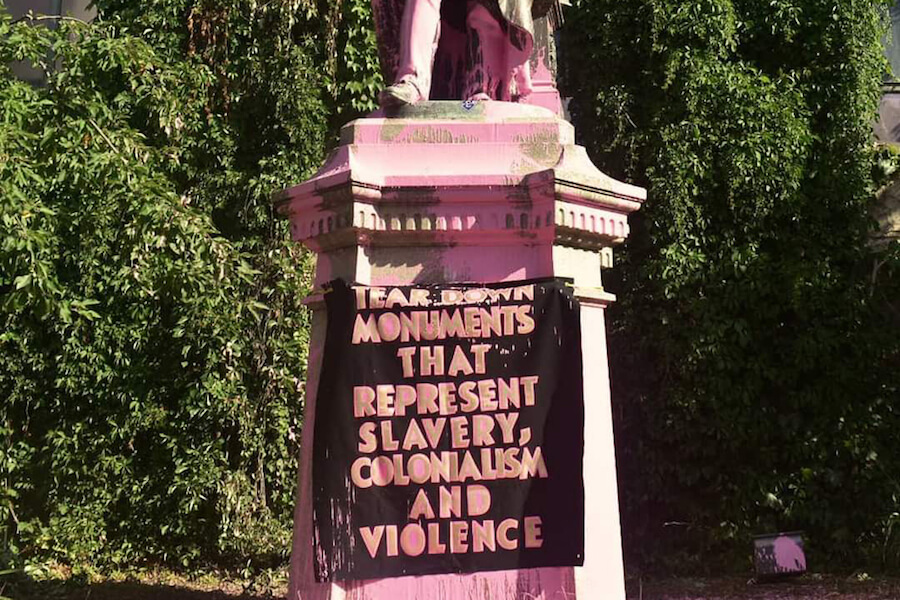 The Egerton Ryerson statue was covered in pink paint during a protest on July 18.

The calls to remove the statue of Egerton Ryerson on his namesake university campus grew louder over the weekend, but the school’s president “has not made a decision about the removal of the statue.”

In a statement on Tuesday, Ryerson University’s Mohamed Lachemi, acknowledged the Canadian public education advocate was “instrumental in the design and implementation of the Indian Residential School System.”

His comments come after Black Lives Matter Toronto activists covered in pink paint during a protest action on Saturday morning.

Toronto police later arrested and charged three people with mischief after the Ryerson statue, as well as statues of John A. Macdonald and King Edward VII at Queen’s Park, were defaced.

The arrests, detention and charges sparked an hours-long standoff between demonstrators and police outside 52 Division. Police chief Mark Saunders and activists accused each other of spreading misinformation in the media.

“These situations can be difficult topics to discuss – we all want our campus and our university community to be a place where we can feel safe,” Lachemi wrote in his message. “For our community, safety can mean very different things – each individual’s lived experience informs their perspective. That’s why it is so important to examine, discuss and debate issues that are deeply intertwined with our individual and collective histories.

“The university acknowledges Egerton Ryerson’s contributions to Ontario’s public educational system,” the letter continues. “As Chief Superintendent of Education, his recommendations were instrumental in the design and implementation of the Indian Residential School System. This is important context that the university has recognized with the installation of a plaque alongside the statue, which was one of the key recommendations brought forward by Ryerson’s community consultation report in response to the Truth and Reconciliation Commission of Canada.”

President Mohamed Lachemi responds to the protests on campus this weekend. https://t.co/q8V2hZd2bM

Black Lives Matter Toronto said they staged the “artistic disruption” to draw attention to demands to defund the police as well as the monuments to colonialism.

“Much like the institution of the police, these statues are monuments that glorify the ugliest parts of our history and our present,” BLM-TO activist Syrus Marcus Ware said in a statement. “If this society truly believes that Black lives matter, it’s not enough to simply say so in words. Let’s refuse to honour colonialism, anti-Blackness, and white supremacy. Let’s tear down monuments to anti-Blackness and colonialism, including the police system. Let’s build a society that truly values safety for all of us.”

In Toronto, a Change.org petition to remove the Ryerson statue garnered more than 9,000 signatures.

Savage Love: Why do I need penetrative sex for “closure”?

Sex meets our physical need for touch, for pleasure and for release, but it also meets emotional needs