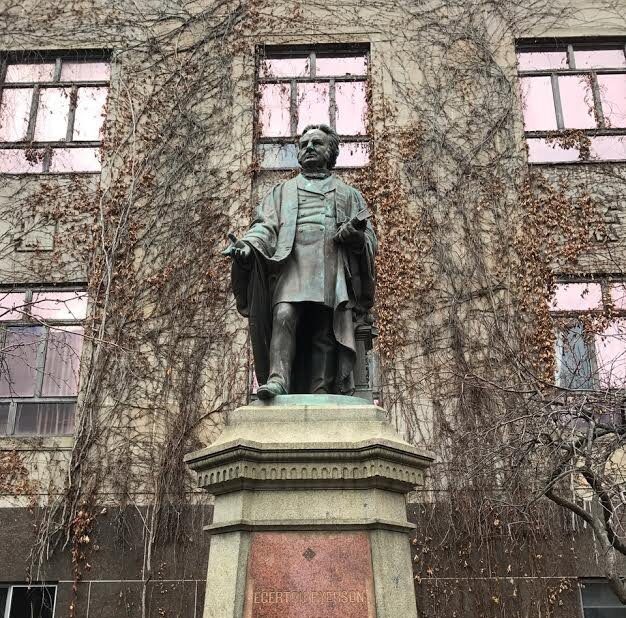 Just the site of this statue of Egerton Ryerson on the Ryerson campus upsets First Nations and other students.

Ryerson University takes pride in its progressive courses, forward-thinking policies and initiatives centred around social justice. It’s big on diversity, as seen in its multicultural student population and on-campus events.

But look at it through the lens of Indigenous people and your perspective changes. The university is named for Egerton Ryerson, an integral figure in the implementation of the residential school system in Canada. This system robbed Indigenous people of their culture and heritage, leaving many with irreparable psychological, emotional and physical damage.

Especially in the last few years, we’ve become aware of the harm done to Native people who were forced into residential schools. Reparations have begun, and apologies are finally being made to Indigenous people.

But the continued presence on campus of a statue of Ryerson directly contradicts the amends the government is trying to make. Statues are erected as a sign of respect and reverence. It’s time for this monument to be reconsidered in light of all we now know about Indigenous history.

Like many organizations at public institutions, the Continuing Education Students’ Association of Ryerson (CESAR) begins every event and meeting by reciting an acknowledgement of traditional territory, recognizing that the land on which Ryerson sits is part of the Dish with One Spoon District belonging to the Anishinaabe tribe.

Ryerson offers courses in Aboriginal studies and has an Aboriginal Student Services Centre on campus, but this is not nearly enough.

The major point of contention right now is the Ryerson statue on Gould. A student who wishes to remain anonymous says, “For Indigenous students to have to walk by the man who stripped their grandparents’ and parents’ culture from them and abused them, while we are attending a place that claims to be a ‘woke’ school is ridiculous.”

Ryerson has had to deal with this issue before and engaged in an healing process with First Nations representatives in 2010. But the issue has not been laid to rest. In 2015, the Black Students Coalition lobbied to get the statue removed and demanded that Ryerson change its name. The administration refused to consider either matter, and the discussion continues in the Ryerson Class of 2020 Facebook group.

Jake Jamieson, a Ryerson student studying performance production, is from Six Nations of the Grand River Territory and belongs to the Mohawk Nation of the Iroquois Tribe and Wolf Clan.

“[My mom and I] were walking down Gould touring the campus and came to the statue, and she gave me the lowdown on who this guy was, what he did and why certain things are the way they are now.”

Jamieson emphasizes that the statue serves as a constant reminder to Indigenous students of what destroyed their culture and the lives of many of their ancestors.

Jamieson believes that, despite Ryerson’s “respect for Indigenous perspectives and commitment to building relationships with Indigenous communities” (as stated by university president Mohamed Lachemi in its Truth and Reconciliation report in 2015), most students don’t know the history behind the school’s name.

“Why isn’t Indigenous history part of the mandatory curriculum at Ryerson?” Jamieson asks.

Aboriginal history is routinely skipped over in textbooks, and very few professors include it in their lesson plans. One who does is Ben Barry of the School of Fashion, especially in his course Fashion Concepts And Theory (FSN 223), about how fashion can help create social change.

Barry takes two weeks in each semester to look at cultural appropriation versus appreciation, and teaches about Indigenous designers. He consistently makes sure to bring in First Nations voices so students can hear from more than “just a white man who knows a lot about the issue.”

“The most important thing besides education and discussion is to listen to the Native voices themselves,” Jamieson says. “We are here, we have a lot to say and we want to be heard. Please do not speak for us if we are here already.”

Ryerson administrators turned down the opportunity to be interviewed for this article but did deliver a written statement acknowledging the connection between Egerton Ryerson and the devastating impact of Canada’s residential schools.

The letter also suggests that the administration has already done its due diligence, emphasizing the “collaboration with the community in 2010  to develop a statement on the role of Egerton Ryerson and residential schools. Once the statement was finalized, the Aboriginal community hosted a healing ceremony and gifted Ryerson the Star Blanket, prominently displayed in the lobby of Jorgenson Hall.”

But the issue continues to fester. It may be unrealistic to expect Ryerson to change its name, but what it can do is continue to change and explore how it handles the issue of Indigenous rights. The university and student groups must continuing to acknowledge the harm-filled actions of Egerton Ryerson. The awareness that we’re on Indigenous land and the promotion of Native rights are integral to the school’s reputation as an ethical and inclusive institution and a socially just community.