Meet five Torontonians who launched businesses during the pandemic

Starting a business under normal economic circumstances is risky enough with thousands of businesses in Canada failing in their first year.

According to Industry Canada, 3,580 businesses went bankrupt in 2018.

Now add a global pandemic into the mix. The International Monetary Fund chief economist Gita Gopinath called the Great Lockdown the “worst economic downturn since the Great Depression and far worse than the Global Financial Crisis of 2008.”

With small-businesses owners arguing that federal and provincial aid programs – including a commercial rent relief plan and a wage subsidy – are not rolling out quickly or efficiently enough, a new business owner has to be extra savvy to succeed in today’s strange environment.

Why launch a business now? In some cases, the pandemic has given rise to new needs. Other businesses that were preparing to launch have also had to change course quickly.

“Startups have a natural built-in agility,” said Jackie Csonka-Peeren, a Ryerson University lecturer and researcher whose expertise includes entrepreneurial behaviour and strategy. “[Startups] are not stuck in any one given business model and therefore are able to pivot quickly. This gives them a natural advantage over incumbents.”

Comfort food from a distance

Food provides comfort during hardship. That, in part, was the inspiration behind Amir Epstein and his wife Megan’s idea to launch the food delivery service imissmontrealfood.com in early April.

“I was sick of my wife complaining about wanting food from Montreal. Then we thought ‘I bet there’s so many people who want that,’” said Epstein, who created and made the site live in 48 hours. “I put it [the site] up and it’s like, fire.”

The site allows Torontonians to order smoked meat and bagels from Montreal stalwarts like Schwartz’s Deli or St-Viateur Bagel.

To place an order, customers email the name of restaurant, deli or bakery in Montreal, pay the cost of the items on the menu plus $29 for delivery and 10 per cent of the total restaurant bill. They receive their food usually in two days (they get a text alert when it arrives).

Epstein and his wife are making two trips to Montreal – five hours each way, plus three hours for pickup – in his SUV per week. The trek is made easier during the pandemic because fewer cars are on the road and the low price of gas.

Even if gas prices go up, Epstein plans to hire someone to do the deliveries and manage the intake.

“I don’t think with the end of this pandemic that Torontonians will be driving to Montreal to pick up dinner from one of their incredible restaurants, no matter how delicious, especially at a cost of two full tanks of gas and 12 hours of driving,” he said.

For now, the costs are minimal to nothing, he says. “The real cost is time.” He makes 20 pickups per order and said he spends roughly $100 on two tanks of gas for the tip.

Amir plans to continue the business for as long as he can. He doesn’t see himself going back to work in the entertainment industry until next year, as concerts and events are not happening for the “foreseeable future,” according to the Ontario government. 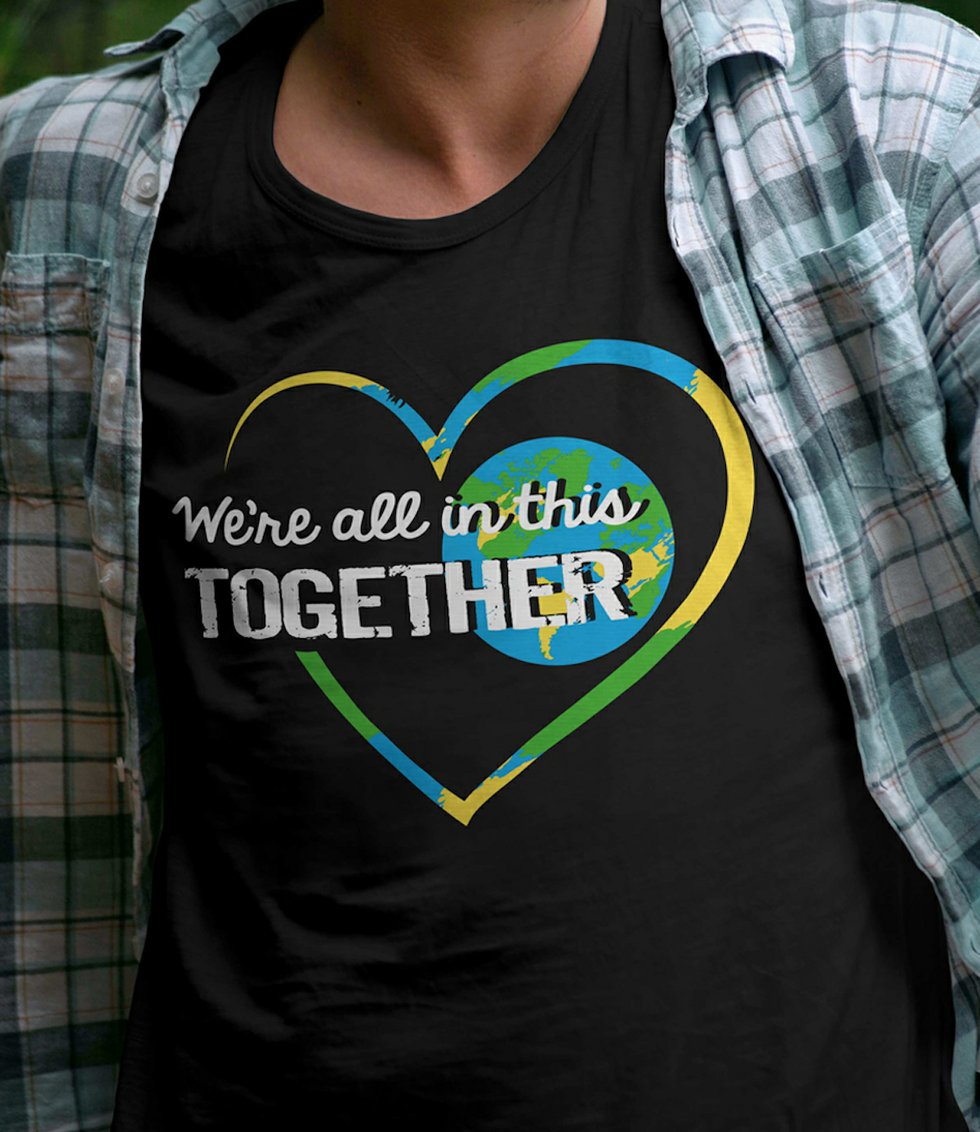 Mark Zimmerman pivoted from the entertainment business to apparel.

From entertainment to entrepreneur

Mark Zimmerman, co-producer of Menopause The Musical, also knows he won’t be back to “regularly scheduled programming” until next year. Even by then, it’s impossible to know what theatre will look like.

Like many Torontonians, Zimmerman’s work came to a halt in mid-March. He wanted to help out so he decided to launch the bespoke t-shirt business inthistogether.global with the aim of making a charitable donation in May.

To date, the site has sold over 700 t-shirts with the slogan “We’re all in this together” at $19.95 each (plus shipping). So far, he’s managed to raise $3,500 with $5 from each sale going to the Daily Bread Food Bank. To launch the business, Zimmerman gave 80 t-shirts away to food bank volunteers, which caught the attention of local media.

“I wanted to acknowledge their volunteers as frontline workers who are putting themselves at risk,” he said. Zimmerman plans to expand the line to include custom face masks, which will be produced in the Dominican Republic. For every mask bought in Canada at $12.95, inthistogether.global will give one to distribute in the Dominican Republic where Ana Gerardino of Torpedo Marketing, the graphic artist who helped design the site, resides.

Torpedo handles operations, including picking and packing the merchandise as well as shipping through Canada Post.

For Zimmerman, launching the website has allowed him to put the marketing and advertising skills he has used during his lengthy career producing television shows and concerts to a different use.

“This is the first time I’ve used a product on the direct response element of marketing and advertising,” he said, adding his dream would be to have every Canadian wear this t-shirt as a “unified message of hope.” His ultimate goal is to raise $100,000.

Zimmerman, who is financing the business with personal savings, hopes to continue the business as a charitable endeavour. 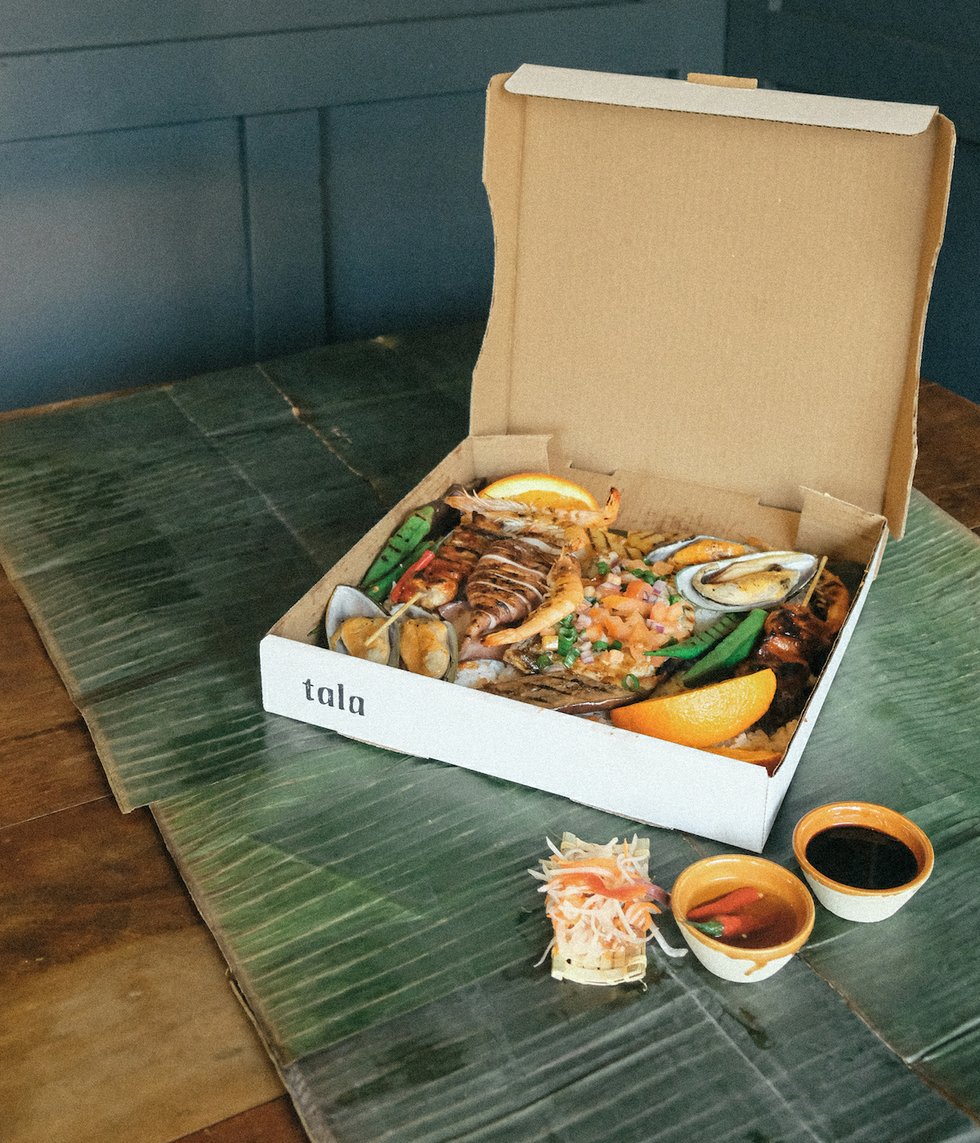 The traditional Filipino meal Kamayan is a communal-style feast usually served on banana leaves and eaten without utensils. It has always been a dine-in meal. When Cathy Ortega opened Tala at Dundas and McCaul in early April, her daughter Sasha Ortega, who’s involved in the family’s business, needed to figure out a new way to adapt the concept for takeout. Enter Kamayan in a pizza box.

“Right now, no one is thinking of sharing a meal that requires you to use your hands with anyone,” said Ortega. “It was extremely worrying to have to think about how we sell the item that we sell during a pandemic.”

Ortega worked in advertising prior to helping run Tala, but comes from the foodie family behind St. Jamestown restaurant Tinuno. She planned to open the restaurant earlier this year when COVID-19 “wasn’t even on the radar.”

“I wouldn’t necessarily call it a choice,” she says about whether or not she would open during a pandemic.

Tala now sells a Kamayan kit that feeds two people and a mini-kit for one person. “We’ve had people order a mini for themselves and then FaceTime their friend who also ordered a mini,” she says. “It’s super sweet.

“Our restaurant only seats about 25 people at a time but with our focus being on deliveries/takeout, we’re able to serve more than that,” she said, adding business is brisk enough that she’s kept five staff members.

For Chris Stevens, keeping staff after opening during a pandemic was not an option.

The owner and co-founder of Kaboom Kitchen in Parkdale was gearing up to open the Korean-style street food restaurant in mid-February and did a soft launch on March 4. Within two weeks, the city was under lockdown.

“We couldn’t have picked a worse time,” says Stevens, “but not by much.”

Stevens had no choice but to throw out his plans and shift course.

Since late March, Kaboom has operated as a takeout and delivery shop with Stevens as the sole employee – he had to temporarily lay off three staff members. Three quarters of his anticipated business was foot traffic, which evaporated thanks to public health measures.

What probably hurts the most is that he can’t rely on social media influencers – something that had been a big part of his business plan.

“We wanted to do some social media marketing so people could see the food. But we don’t have any influencers who can take out food,” he said. “Besides, nothing looks good in a takeout box.”

Takeout and delivery are keeping his doors open for now.

“It’s been a slow build for us,” he said, adding that business picked up after the launch of Canada Takeout, which encourages people to support local restaurants.

Stevens is sub-leasing his kitchen space from cocktail and shareable plates venue Superfly, whose landlord has given a grace period for April but has yet to sign on to the federal government’s commercial rent relief program.

One unexpected lesson for Stevens was how the ordering volume from his suppliers was way off what he had experienced while running a restaurant previously. Sourcing dry goods and produce has also become more challenging during the pandemic with some suppliers switching to grocery chains after restaurants and hospitality industry customers shuttered.

“I’m trying to figure out how to be a bit scrappy,” he says. “It’s about being as lean as possible for the time being. When we go back to having staff come in, it’s going to be like wonderland.”

Marketing is one of the first areas to be cut in an economic downturn as companies pull resources in-house. That didn’t deter Zoltan Lorantffy from launching We-Rel8, the digital content marketing and branding agency he has been developing for a year.

“Maybe you’ve got to be a little crazy to build any business,” he says. “Founders and business owners have a strange cocktail of optimism, idealism, rationalism and drive. Often these complement and contradict each other and are always in a state of flux.”

During the pandemic, he sees an opportunity to help brands craft the right messaging around COVID-19.

Brands have solutions or recommendations but also made mistakes, like one food ordering app that claimed to be the “smarter choice” during COVID-19 because it’s pick-up only.

“I’ve seen a lot advertising miss the mark when it comes to brands communicating with their audiences. COVID or no COVID, this is the problem we are working to solve,” he says.

Lorantffy said his prospective clients, mostly small businesses and startups, are not going out of house. While he doesn’t deny ad budgets have gone down, businesses are still spending.

“They’re starting to move their spending in different areas,” he says. “We’re seeing an uptick in digital and social.”

As of press time, We-Rel8 was working on a monthly retainer deal with an online platform for recording artists. Lorantffy is also in discussions with two other prospective clients.

Agility is Lorantffy’s advantage over large and medium-sized agencies.

“As we help them grow, they will want us to put them on a retainer,” he says, adding that he’s working with clients on a project-by-project basis by providing workshop or consulting time for a fee.

Circumstances have forced everything to go virtual, including job hunting and hiring. Lorantffy hasn’t even met one of his employees in person.

We-Rel8 is a digital-only agency, so Lorantffy and his four staff are focusing on brand awareness, mainly through social media. Productivity isn’t a problem with collaborative software tools like Hubspot for CRM, Slack, WhatsApp and Skype for messaging, and Google Drive to share documents. Meetings are held virtually using Zoom.

“Everyone is missing being able to meet in person, but it doesn’t determine what our business does,” Lorantffy said.

That’s a lesson all businesses across all industries have come to realize during the pandemic and must take into the future as they start to reopen ­– whether remotely or brick and mortar.