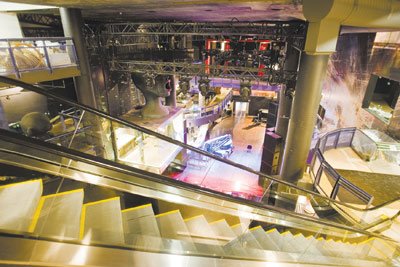 This LGBT celebration is one of Cana­da’s most recognized festivals, and there are plenty of free parties to come out to from June 20 to 29. While the parading and party-going is great, it’s important to remember that it wasn’t so long ago that Pride organizers were battling mayor Art Eggleton and city council to have the city recognize this huge event. The website has detailed info on it all: www.pridetoronto.com. There’s also the Queer West Fest (gaywest.905host.net) on Queen June 13 to 22.

The Toronto Music Garden (475 Queens Quay West, 416-338-0338) is easy on the eyes and the ears. Designed by landscape architect Julie Moir Messervy in consultation with cellist Yo-Yo Ma, the 2-acre site reflects the five movements of Bach’s first cello suite. But you don’t have to know the music to find the garden amazing – really, with mazes and everything. The undulating paths, wildflowers and groves make for a strange wonderland, minus the yellow brick road. Great place for casual encounters, too, if cruising’s your thing. Free concerts happen Sundays at 4 pm and Thursdays at 7 pm.

If you’re not sure what to gamble your $10 on at the Fringe, a good place to do your homework – and down a pint or two – is at the Fringe Club (292 Brunswick, www.fringetoronto.com), where a nightly talk show includes comedy, music and dance as well as interviews with some of the Fringe artists. July 2 to 13. 416-966-1062. 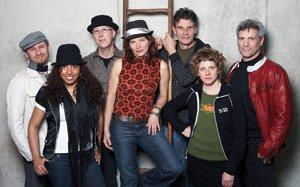 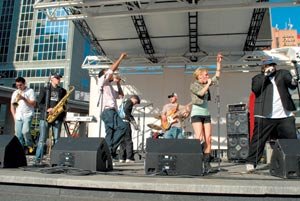 This year’s North By Northeast festival (June 12 to 15, www.nxne.com) boasts a number of free events across the city in addition to the regular ticketed shows, from stages set up at the airport to in-store appearances at various record stores and shows in parks around town as well as the annual free events at Yonge-Dundas Square. Highlights of events in the square include appearances by Ted Leo and the Pharmacists and Bran Van 3000.

Not for the hoity-toity

The Toronto Free Gallery (1277 Bloor West, 416-913-0461, www.torontofreegallery.org) offers art with a ­political message. (Where have we heard that one before?) At Toronto Free, commentary on contemporary culture is cutting. Sharp. Shocking. Sometimes mocking. Next exhibit: Toronto Free Library, curated by Mariko Tamaki and Sarah Todd, runs June 12 to July 19.

If you’ve ever walked into the Timothy’s (320 Danforth, 416-461-2668, www.comedyon­thedanforth.com) and wondered what everyone was laughing at, it’s the free improv comedy that brews here every Friday night from September through June. Two stellar improv troupes – Better Than Nothing and the Wrecking Crew – rotate to get on-the-spot laughs. Don’t miss the June 25 finale, in which both teams combine to get extra-tall laughs.

They have big balls 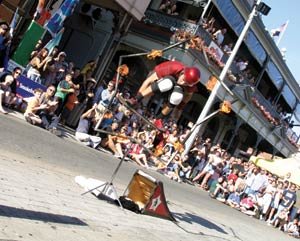 BuskerFest takes clowning, acroba­tics and juggling to a new level. Forty of the best buskers from across the globe converge on the St. Lawrence Market neighbourhood to impress you with sword-swallowing, puppetry and aerial antics. They’ve got awesome names like the Dirty Dishes, Alakazam and Space Cowboy. August 21 to 24. www.torontobuskerfest.com.

How green is Don Valley 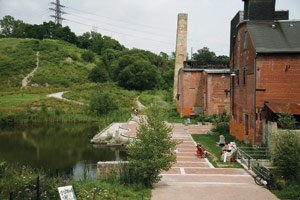 The Brick Works – swamp, wetland, rusted-out hulks from T.O.’s pre-industrial age. It’s the most alive piece of green in the Don Valley that most Torontonians have never seen. We’re lovin’ getting lost in the weed – uh, we mean weeds. Bayview Extension between Bloor and Pottery Road. www.evergreen.ca.

Art in the park 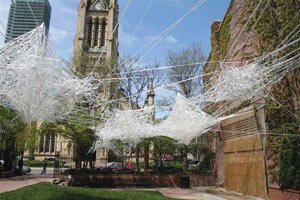 There’s nothing like a gallery without walls to bring out a sculptor’s edgy side. Installations have been going up at the Toronto Sculpture Garden (115 King East, www.torontosculpturegarden.com) since 1981, and they’re always fascinating. Currently, Katie Bethune-Leamen’s 20-foot-high mushroom contains a studio space where the artist sometimes stays in residence to interact with visitors. To April 15, 2009.

A Promise worth making 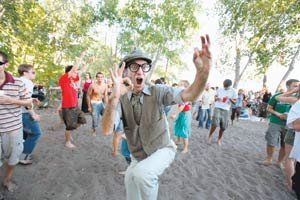 The team at Promise are once again getting a permit to continue their well-loved Sunday afternoon parties at Cherry Beach. Expect an eclectic assortment of DJs each week, and remember that the long-weekend editions move to Mondays. To get on the mailing list, e-mail promisebz@rogers.com.

If you’re leaving a club and want to be entertained without having to go to the ATM, head over to Second City (51 Mercer, 416-343-0011), where, after every late show on Saturday night, the cast put on a free improv set. You could be seeing comedy history in the making it’s from these off-the-cuff scenes that the cast creates the sketches for their next show.

Forty years on and Caribana (June 15 to August 4) has become the largest street festival in North America, fea­turing an overwhelming number of events over six weeks, culminating in the massive parade along Lakeshore Boulevard August 2. Check the official www.caribanafestival.com site for complete details as the festival approaches. 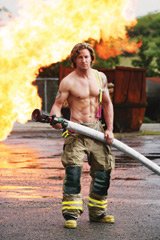 Some of the most exciting concerts of the summer are happening at Har­­bourfront, and best of all they’re mostly free! The World Routes mini-fest features Afrobeat upstart Seun Kuti with Egypt 80 (July 2) and Senegal’s truly magnificent Orchestra Baobab (July 3). Adding to the seasonal sizzle is Dominican bolero crooner José Manuel Cobels, aka Puerto Plata (July 12), who tops the Ritmo Y Color festivities (July 11 to 13), while the What Is Classical? weekend (July 25 to 27) boasts the Toronto debut of Ethiopian great Mulatu Astatke backed by Boston’s awesome Either/Orchestra (July 26). As usual, the Island Soul pan-Caribbean celebration (August 1 to 4) will be a huge draw, with scheduled performances by roots reggae stars Michael Rose (August 2) and the legendary Abyssinians (August 3). Also be sure to mark your calendar for South Asia Calling (August 8 to 10), the Hot And Spicy Food Festival (August 15 to 17) and the Ashkenaz Festival (August 26 to September 1). www.harbourfrontcentre.com. 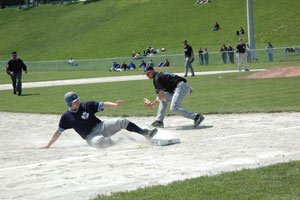 Just because the hockey team sucks doesn’t mean you can’t see a Leafs franchise win. There’s also something calming about sitting on the grassy hillside in Christie Pits dodging foul balls with some soft-serve in hand. Various dates until July 20. www.leafsbaseball.com.

Graeme Parry (www.graemeparry.com) of Laneway tours leads walks through the maze of the city’s forgotten back streets, where lampposts standing in silhouette shed a whole new light on the city and muralists let their imaginations run wild on garage doors. Beware the march of the penguins.

You don’t have to buy a program or place a bet at Woodbine Racetrack (555 Rexdale, www.woodbineentertainment.com). Just sit in the sun at track level – bring your own recliner if you like – to take in the poetry in motion, the patois or bettors with rolled-????up racing forms itching to hit the next long shot. The so-????called sport of kings is Everyman’s pleasure.

Critical Mass began in San Francisco in 1992 and grew from there. Toronto’s had these massive bike rides for years. They attract varying degrees of police attention but continue to illustrate the bike’s rightful place on the road. And don’t forget to forget your clothes for the late-????night nude version, Critical Ass. Mass meets at Bloor and Spadina at 6 pm the last -Friday of each month. Ass gathers in the same spot later on, at 10 pm. www.cm-toronto.ca.

Complete freedom from cars is a dis-tant dream, but a trip to Kensington Market on the last Sunday of each month from May to October is a taste of how great it would be. The music, games and dancing have been spreading to other parts of Toronto, so look for similar Pedestrian Sundays activities in Mirvish Village and Baldwin Village. Hours vary for each location. Check www.pskensington.ca for details.

Every breath you take

Remember how much Smog Days suck? Like this April, when we racked up three? See what the city and friends are planning to do at Smog Summit 2008. It happens from 9 to ?4:30 pm Wednesday (June 4) at City Hall (100 Queen West). That’s Clear Air Day. Let’s see if politicians and stakeholders help it live up to that name. www.cleanairpartnership.org/smogsummit.

Remember cheap Tuesday films? Well, now try free Tuesday films at Yonge-Dundas Square. Screenings of big hits like Titanic, Annie Hall and The Princess Bride run from June 24 to August 26. Most start at 9 pm, but click on the Films link at www.ydsquare.ca for details