This story is sponsored by the City of Toronto 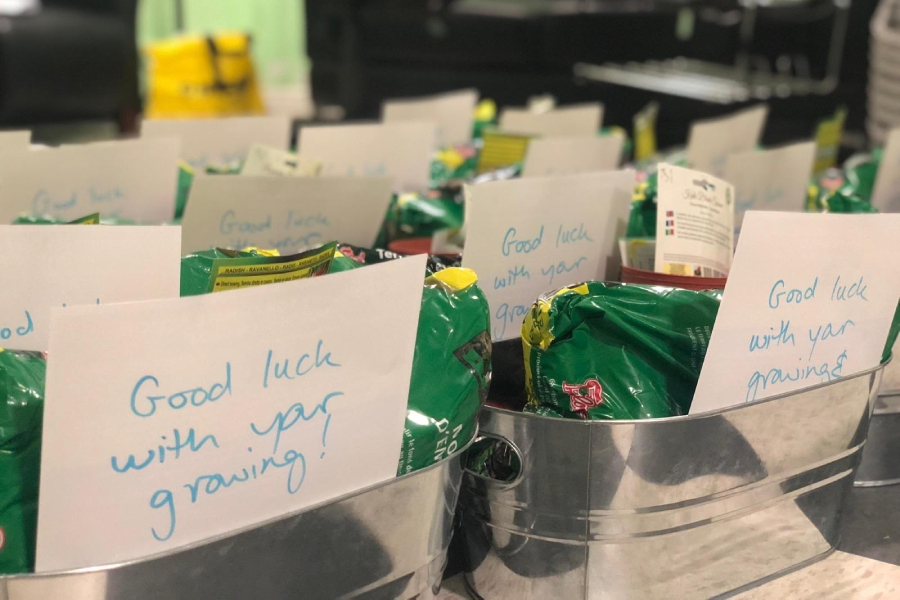 There can be immense benefits to growing your own food, but not everyone in Toronto has the same access to grow food at home. For areas with more concrete than green space, neighbourhood groups are looking for ways for residents to get their hands dirty.

“Food security is a big issue in our community,” says Kwame Anane Frempong, the programs coordinator at Rexdale Women’s Centre. “Gardening is one way of overcoming stress and mental health issues. And there’s a health benefit when you’re connected to nature.”

Rexdale Women’s Centre has a robust virtual program at the Share, Reuse and Learning Centre. Balcony and community gardening is one element, part of a larger suite of occupational environmental initiatives that helps the community while helping the earth.

There are programs to help with community composting, handling food waste, healthy eating and exercise, clothing exchanges and a program called U FIX IT that trains community members to repair electronics, giving them skills while reducing the number of items that hit the landfill. This initiative is supported by City of Toronto Solid Waste Management Services.

“A lot of our community members are isolated right now,” adds Kadra Howsi, a community engagement worker at Rexdale Women’s Centre. “There are a lot of newcomers and seniors, and keeping occupied and busy helps with loneliness.”

Gardening can feel daunting in a big urban city like Toronto whether you’re in a high-rise, condo or surrounded by soil.

Get Growing Toronto from the City of Toronto provides resources to help people grow food at home.

It includes a series of videos, a blog and a newsletter that provides walkthroughs on seeds or seedlings, soil prep, tools, pests, how to maximize production and how to get your kids involved.

“Interest in growing food has increased since the pandemic started,” says Candice Keast, coordinator of the City of Toronto’s Get Growing program. “Many of us, when confronted with empty shelves in our local grocery stores, began to understand that our food system is fragile. Empowering Torontonians to grow their own food comes with a host of benefits, including increasing the resilience of that system.”

Early last year, the city programmed 12 container gardening workshops in six priority neighbourhoods – areas with a lot of tower residents and less access to green space. The idea was to encourage residents to start their gardens, which can increase food security and access, revitalize communities and reduce greenhouse gas emissions that come from transporting food.

The 12th and final workshop would have been in Rexdale on March 13, 2020 but it was cancelled due to the pandemic.

“There were supposed to be two workshops, and even though we didn’t get to have the second one, what we learned from the first one helped us to help our community,” says Frempong. “Those lessons have been ongoing during the pandemic.”

Charlyn Ellis was also at one of those 2020 workshops. She wasn’t attending as a beginner looking for the basics of gardening. She’s been a coordinator at the Emmett Avenue Community Garden near Jane and Eglinton for about 13 years. But getting out to events like those are extremely important to her. At its basis, gardening is about community, she says, both in her own neighbourhood and at gardens throughout the city.

“It’s encouraging when you meet other people that are doing similar things in their own neighbourhood,” she says. “You get to trade knowledge and wisdom, and you often end up leaving with some equipment or techniques or a plant. That makes you feel so motivated, to have something growing right in your hand.”

For Ellis, the garden has been a lifeline during the pandemic. It’s helped with social connection, but also “the need to connect with the earth.”

At the Emmett Garden, Ellis is a big proponent of growing and harvesting communally – not in individual plots of land, like in some community gardens, but rows of garden that they all tend to and reap from as a group.

“We grow together, harvest together and eat together,” she says.

People often get territorial and try to claim their own plots, she says, which is a constant challenge for the community initiative. But the pandemic brought another problem: many people were just staying home. So they started leaving bins of tomatoes and other vegetables outside of the garden for people to take.

It’s a mixed group, she says – people who are Black and Korean, Japanese and Greek, intergenerational, many seniors. And they all learn from each other, learning to grow food from each other’s cultures and intermingling with their own.

The garden, which is supported by FoodShare and Urban Harvest, is overflowing with homegrown vegetables: beans, tomatoes, onions, callaloo, okra, Japanese green onion, garlic, three kinds of kale. They even do beekeeping.

“Having this space has been very important in this time,” she says. “Getting your hands and feet in the dirt, it can be very healing. I’ve always been connected to this garden, even on a spiritual level. We began in a garden, and that’s where I feel the most connected.”

To start you on your growing journey, check out Get Growing Toronto, a program of the City of Toronto’s Live Green Toronto.