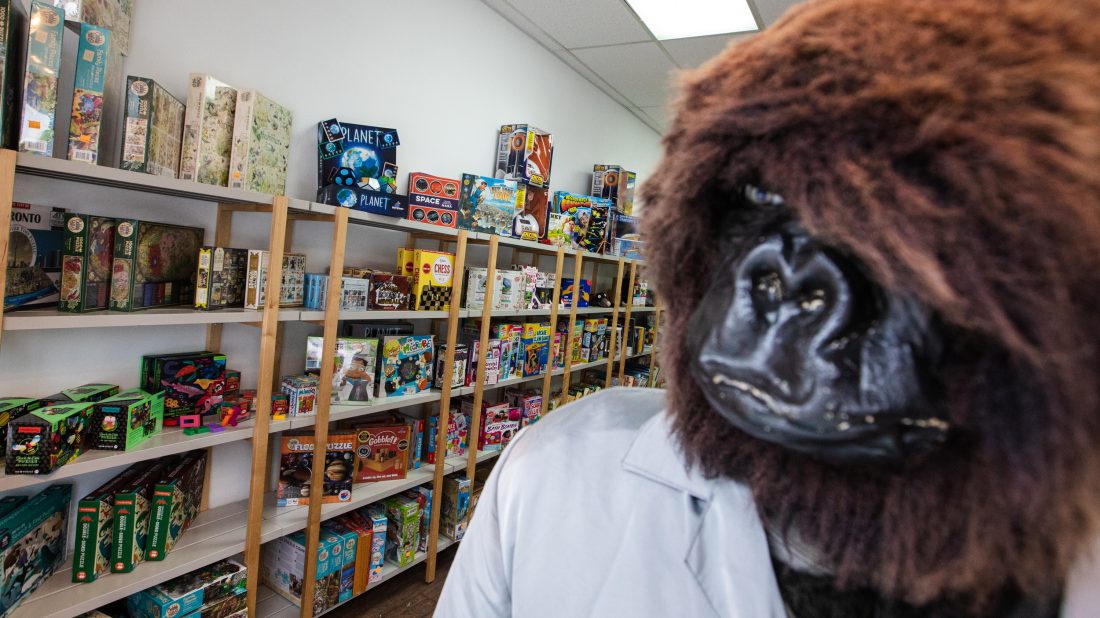 The old gorilla from Active Surplus welcoming you into the Gorilla Store on College.

Active Surplus is gone, but its legacy lives on at the Gorilla Store.

From 1962 to 2015, Active Surplus was one of Toronto’s strangest and most delightful hidden gems. Located on Queen West and a few other locations over its lifespan, it was ostensibly a hardware and supply store, but it was really an anything store – a big holding ground for bins and bins of wires, tools, nuts, bolts, spare parts, baby doll arms, bouncy balls and all sorts of other weird things you probably hadn’t thought of when you walked in.

It was the kind of unique, only-here spots that are disappearing and leaving big holes in their wake (quite literally at the corner of Bathurst and Bloor).

The store closed in 2015 due to rising rents and changing Toronto culture. The second-floor space at 347 Queen West is now home to another rare bastion of the old cool Queen West – the second-hand clothing shop Black Market, which moved from its basement space across the street.

But if you still remember making pilgrimages to Active Surplus for your artworks or tinkering projects, you might do a double-take the next time you’re walking through Little Italy. Sitting in the window at 609 College, just west of Clinton, sits Active Surplus’s locally famous mascot, a nearly life-size gorilla in a lab coat named Professor Banana.

The professor welcomes you into the Gorilla Store, a shop run by Graham Green, a vital figure in Active Surplus’s last act.

“Active Surplus can’t be replaced, it will never be replaced,” says Green. “This is a way to respect what it was – its huge contribution to science and tinkering and art – and build something new with it.”

From the Science Centre to Little Italy

Like its predecessor, the Gorilla Store is hard to explain but makes a strange sort of sense when you walk in. It’s somewhere between an education science shop, a bookstore, art store, workshop space and, like before, electronics, hardware and supply shop. It’s unabashedly nerdy, a testament to accessible and fun STEAM (Science, Technology, Engineering, Arts and Mathematics) education and retail.

The Gorilla Store opened on College in 2020, just before the pandemic, but it actually opened two years before that at the Ontario Science Centre.

Green moved to Toronto from Winnipeg in 2009 originally looking to work in business development at the comic book shop Silver Snail but found Active Surplus down the street instead.

“I walked in and thought ‘wow, this is like the inside of my head,” says Green, who has a background in microbiology and bioethics and loves shows like Mythbusters. “There were all these weird things you could put together and play around with.”

He helped modernize the store, especially at its location on Steeles, and carved out a community engagement role for himself. He was the point of contact for many suppliers looking for stuff to sell at the store, but also frequent customers – artists, people at hobby shows and the maker community. When Active Surplus closed, he kept the same phone number and people kept calling.

“I kept in touch with my surplus suppliers and my client list and helped connect them with stuff,” he says. “Like, artists would say ‘I need something that’s this colour and shape. What can you find me?’ I’d go and find it.”

Eventually, Green’s name got passed to people at the Science Centre, who were looking for those same things. They gave him 69 square feet and he filled them with bins of battery packs, motors, wheels and gear switches. When they wanted to build new exhibits, Green helped supply them. Soon, the Science Centre wanted to build a little retail wing and he made the Gorilla Store official, expanding and launching it along with outposts of STEAMlabs and the Maker Bean Cafe.

In 2019, Doug Ford started antagonizing the teachers’ union and Ontario teachers started a work-to-rule campaign, which Green says hurt his sales immensely. Now, field trips to the Ontario Science Centre were becoming more rare, and schools weren’t working with him as much on their projects. He wanted a space with more autonomy and found one on College. Unfortunately, opening just before the pandemic meant he had to lay off his staff and is currently operating as a one-man operation (he gave everyone good references, and three of his workers’ side gigs have now become full-time, he says).

Still, he says, the store has got some positive word-of-mouth. And it benefited from the early days of the pandemic when people were bored and taking walks, exploring their neighbourhoods.

“Jane Jacobs would have loved it,” Green says.

Inclusive science for kids and adults

The shop thrives on the brick-and-mortar local business experience you can’t get on Amazon. People will come in and look around, but he likes to ask them what they do and what they’re interested in. If you’re looking for a present for your niece and you’re a photographer (like our photographer Nick Lachance, who initially told me about the Gorilla Store), he’ll help you find some age-appropriate things related to that – and also maybe some parts or gear for your own camera, and then maybe something else will catch your eye like a build-your-own lightsaber kit (again, hi Nick).

The front of the space is more store-like. That’s where you’ll find toys and games, science kits, hand boilers and other things that might catch your eye. There’s a toddler section filled with books by Chris Ferrie, a quantum physicist who’s built a children’s book empire explaining scientific concepts to kids. There are orreries and robotics, build-your-own smartphone kits and board games based on photosynthesis.

You might think it’s for children, but Green says that’s only by default.

“Toronto has a real problem with the concepts of things like science, art and culture all being geared toward kids,” he argues. “The Science Centre, the ROM the AGO, they all have these… all of the STEM and STEAM learning programs in the city, top out at around age 15. That’s because as soon as you hit 15, nothing’s cool, but also because nobody programs for that age. There are a lot of adults who are interested in this stuff too, but they’re much more likely to just search out a YouTube video.”

Part of that is the de-emphasis of shop class in schools and a generational push away from DIY tinkering and repair. When Active Surplus first launched, there was a culture of Heathkit models, home radio and TV repair and working on your cars. Nearby King Street was still an industrial area, and the city still had a number of factories around town. We carry more devices than ever, but they’re not easy to fix yourself. Instead, you need to rely on spots like the Apple Store – or just buy the newest model. The engine compartment of cars is small and requires specialized tools, and advocates continue to fight for the right to repair as more and more manufacturers use proprietary technology.

The Gorilla Store has some things geared to adults, like a section of art by people with scientific backgrounds: crocheted neurons, geophysical linocuts and anatomical diagrams in charcoal and pencil. There’s a sturdy adult nonfiction section with subjects like death and grieving, gamification, disability studies and a particular focus on feminist and gender-diverse subjects. There are books on women who have been overlooked in scientific innovation.

“These are people who have traditionally been excluded from science; they’re the ones [for whom] science has been used to bludgeon them over the head.”

There’s an Indigenous section with books written in languages that cover all of the major Ontario Indigenous nations. There’s a whole new generation growing up with access to science in their own languages and with their own cultural understanding in ways that have been kept from them in the past, says Green, which is a form of economic empowerment.

The Active Surplus-like back room of the Gorilla Store

It’s the back room that will evoke the most nostalgia. Like a smaller version of Active Surplus, the design-bare room is positively crammed with stuff: computer monitor arms, medical devices, bowling pins and springs, beakers, switches and parts to things you didn’t realize you needed – like someone’s home repair room exploded. If you need something that’s not there, Green says he’ll go find it.

Eventually, the room will also be used for workshops. He’s done lamp-making and kitbash model making as well as a few book events, but hopes to do a lot more once the pandemic allows: things like movie prop workshops, musician nights and anything customers might be interested in learning how to do. He hopes to do them biweekly or monthly, and will offer the space for free to people who want to have events there.

It’s not quite Active Surplus, but Green says he hopes it serves a similar purpose.

“What I hope people find here is the same kind of thing I hope they found there,” he says. “The thing they needed for the problem they had and also another thing that inspires them to do something else.