Cock and ball torture, and tortured by anxeity 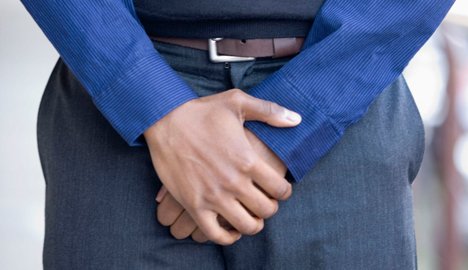 My boyfriend enjoys having his cock and balls played with very roughly. I am happy to oblige him in this request, but I worry that I will render him sterile or at the very least a candidate for the emergency room. He says he knows his limit, but believe me, I feel like I’m whaling pretty hard on his twig and berries and his reaction barely registers. There seems to be a guide out for just about everything sexual these days. Any recommendations in the cock and ball torture (CBT) department?

Though the home vasectomy kit offered here is clearly intended as a gag, you most definitely don’t want to risk ending up in one of those situations where life imitates an Onion headline. Luckily, there are a couple of books to help you avoid this possibility so you can proceed with your sadistic intimate escapades confidently.

The Family Jewels: A Guide To Male Genital Play And Torment, by Hardy Haberman, is thorough and practical, covering male genital anatomy and, without fear-mongering, the risks of handling it vigorously. It describes categories of play such as constriction, compression and percussion as well as equipment, both designed specifically for the job and “pervertables” – ordinary household items that may be used in a pinch. There’s also a fairly detailed section on genital rope bondage.

My intern, Dimitri, also recommends the updated Leatherman’s Handbook, by Larry Townsend, as a good source for safe and creative CBT scenes.

Another manual you may want to have around is Jay Wiseman’s Toybag Guide To Dungeon Emergencies And Supplies. It doesn’t cover CBT per se but is handy if you do encounter a crisis. Wiseman is especially precise about never hesitating to call EMS or visit the emergency department if things go awry.

“And I mean extreme, from bowling balls to weights used in strength training,” he says. “The most impor-tant point to stress is safe play. And if someone has gone as far as he or she is comfortable going, then that should be it.”

In other words, you should be permitted your boundaries as well, Reluctant.

I had an attack while I was in New York on business (loneliness is a huge trigger for me, and my wife wasn’t home to take a call), and ended up having protected sex with a prostitute I met in the hotel bar where I’d retreated in a desperate attempt to be around people. Since then, all I can think about is repeating the experience. In fact, my anxiety increased to the point where I found a rub and tug here in Toronto, and the only thing that kept me from going in was a police raid. Had I been a minute faster going through the door, I would’ve been charged with being found in a bawdy house.

While I haven’t done so, I travel quite often for work (once a month) and I don’t want to make the same mistake on my next trip. I’ve talked about the issue with my therapist, who says anxiety can lead to sex addiction, but nothing she’s suggested to curb my urges has worked. Do you have any advice?

Okay, so first things first. You say you were recently diagnosed with this disorder and are being treated pharmacologically. I don’t know the specifics of your prescription, but it can sometimes take a couple of months for meds to kick in, so you may not feel the calming effects for some time. This may also not be the appropriate scrip for you. Sometimes it takes a little trial and error to get the right brew.

You also say you’re doing all you can to keep your anxiety in check: exercise, meditation, breathing and so on. It seems likely to me that you are keeping a ledger and checking off your efforts not as a means of managing your behaviour but as an incentive to act out, proof that nothing is working, so you may as well hit rock bottom. A form of therapy that helps a lot of people who suffer from this kind of self-defeating behaviour is CBT (no, not cock and ball torture) – cognitive behavioural therapy. If you’re not doing it already, you may want to look into it.

I think you should do some research into sex addiction before you let your therapist talk you into believing that this label is applicable to you. A good place to start is Cory Silverberg’s column on About.com, and specifically this one.

As Silverberg says about the hype surrounding this diagnosis, “So what have most of the major news organizations done when called to report on a concept that still hasn’t been accepted into either of the bibles of world mental health professionals? Well, they go right to the people who invented the term, the sex addiction and recovery industry. Without agreement from mental health professionals, without a solid basis of evidence-based research and, in many cases, without a grasp of sexological research, the sex addiction industry has established itself as a necessary body to treat an illness that only they agree exists.”

Silverberg continues, “This is not to say that there aren’t people who struggle with out-of-control sexual behaviours. People lose relationships, family, job and more because they feel like they can’t control a particular behaviour. The problem is not that the sex addiction industry is making up the pain the problem is that by mixing morality and ambiguity into their theory, they actually reduce their chances of helping peo-ple in pain deal with their problematic behaviours.”

Another excellent article on the topic is by sex therapist Marty Klein. You can find it right here.

As Klein says, “Professional sexologists should reject any model suggesting that people must spend their lives 1) in fear of sexuality’s destructive power 2) being powerless about sexuality 3) lacking the tools to relax and let sex take over when it’s appropriate.”

Could be time you found yourself a therapist who doesn’t use terms that aren’t generally accepted by mental health professionals – one who might also see you and your wife together.

Send your question to Sasha: Sasha@nowtoronto.com