NOW MagazineLifeGreat Lakes Water Walk has me walking on water

Great Lakes Water Walk has me walking on water

As tears well up in my eyes, I tell the water that I hope the city will start taking better care of it 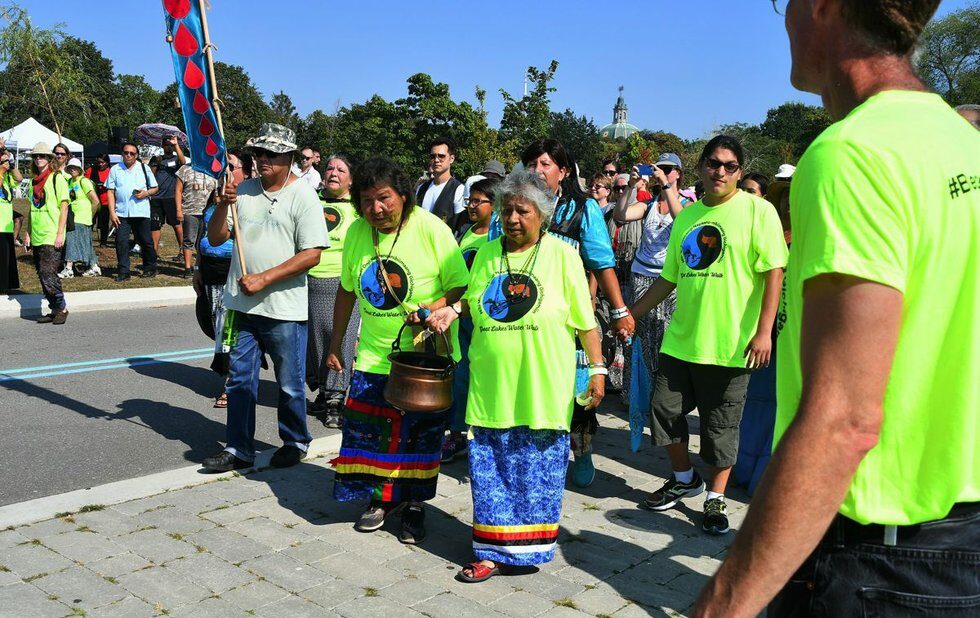 We rise in the dark before the sun comes up. The spirit of the lake is already calling us. Bleary eyed, about 100 of us shuffle onto the misty grounds of the Scarboro Mission on the edge of the bluffs on September 24 for a sunrise ceremony to show a little love for the lake that gives and gives to millions of us everyday. This is Toronto’s inaugural Great Lakes Water Walk.

Indigenous grandmothers have led similar walks around these lakes, but never one dedicated to shaking off the concrete brain fog on Toronto’s shores and re-connecting this city’s residents to the water source that keeps us alive.

Williams’s journey tracing the water’s edge with ceremonial water began in the Kawarthas eight years ago, inspired by another Anishinaabe elder, Josephine Mandamin, who first walked around the entirety of Lake Superior in 2003 and has walked around every one of the Great Lakes, calling for cleaner water and greater water protection.

For this morning’s event, these Anishinaabe grandmothers have invited all cultures, ethnicities and religions to join in, hoping, as Williams says, “to have Canadians look at the water differently. When you look at something as sacred you don’t damage it or mistreat it.”

“It’s reconciliation in action,” says Ojibwe Anishinaabe grandmother Kim Wheatley, who was the cultural and protocol coordinator for the walk and led the western leg that began in Mississauga. Two days after Prime Minister Justin Trudeau confessed in an address to the UN that “there are, today, children living on reserve in Canada who cannot safely drink, or bathe in, or even play in the water that comes out of their taps” – and vowing to do better – today’s water walk feels particularly poignant.

But for the two-thirds of Indigenous communities who have experienced boil water advisories during the last 20 years, change isn’t coming soon enough.

“We in our own homes do not have access to drinkable water like every other Canadian in this country,” says Wheatley.

“This is not a protest,” she adds.  There are no placards or demands being shouted. She’d like to see Toronto declare itself a Blue Community, granting water legal status as a human right. For these Indigenous women, who as mothers and grandmothers are traditionally charged with protecting “the lifeblood of Mother Earth,” it’s about getting Torontonians emotionally connected to their water source.

Today, that means inviting women in the gathering of all cultures to roll up their sleeves, get smudged in and take turns carrying the ceremonial copper pail of water drawn earlier from the lake, blessed and carried at the front of the walk.

Turning down a tree-lined street towards a bluff-side drive, a volunteer asks if I want to help carry the copper pot and if the man beside me wants to carry the protective eagle-headed staff. I stammer, before jumping at the chance. “Wonderful. Stand behind the woman in the long blue skirt. You’ll be next.”

The copper pail passes into my hands moments later as we turn down Fishleigh Drive, just west of Bluffers Park. It’s heavier than it looks. Next to me an Indigenous man, a housing worker by day, takes his turn holding the staff. It’s his first water walk, too. I’m determined not to let any water splash excessively as I walk and remember what Williams said earlier about sending the water good thoughts.

I try my hand at praying and tell the water that I hope the city will start taking better care of it as tears start welling up in my eyes. I hold them back. Can’t waste precious water when it’s a sweltering 30ºC at 9 am. Another woman taps my shoulder and offers to share the load.

Falling back into the tangle of water walkers, I recall Williams’s words from our chat a few days earlier about carrying the water. “I have seen women change how they look at the water, how they treat the water. They make changes within themselves and also within their family. They stop putting chemicals in the water. They’ll save water.”

As we turn off Queen Street East towards the Beaches, Williams’s niece, Liz Osawamick, tells me that getting everyone involved in carrying the pail in a sacred water ceremony is key to getting more of us advocating for the water.

“It’s important to bring the water awareness of the four races to this great area,” Osawamick says to me, “because you have all kinds of nationalities that live here in Toronto. We are made of water. It’s [critical] that they know how sacred and important the water is to everyone.”

Later, a multicultural water blessing of the Great Lakes will be held at a gathering point at Marilyn Bell Park, and everyone will join in a round dance.