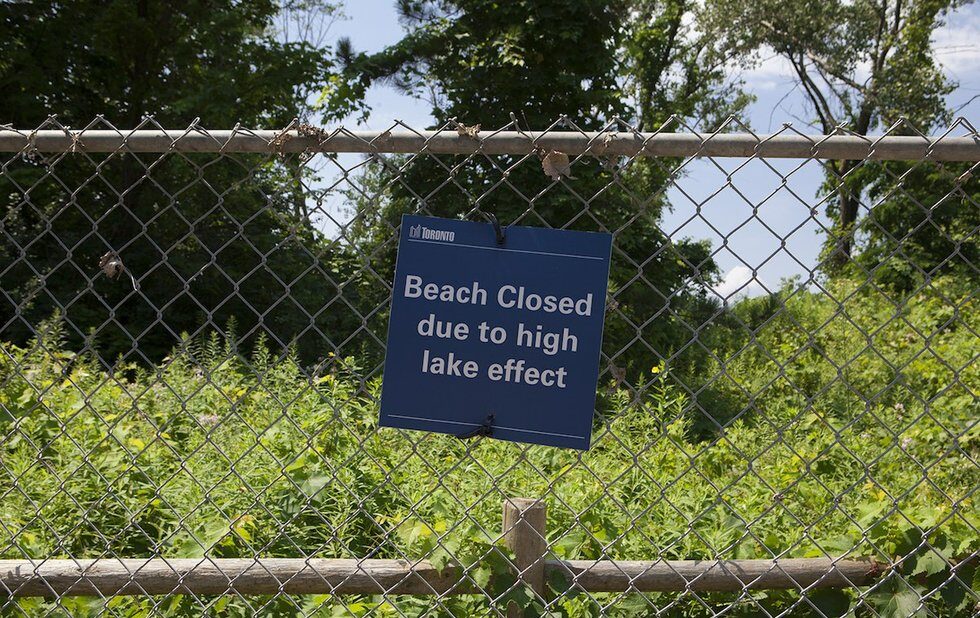 Before Shane Hollon visited Hanlan’s Point for the first time in 2013 he had no idea Toronto had a clothing optional beach.

On the recommendation of a straight couple, he and his boyfriend (now husband) made the trek to strip down. Hanlan’s was his first time exploring naturism – going nude in a social setting, usually outdoors – and while he doesn’t consider himself a full-time nudist, the beach became a special space of acceptance and body positivity.

“As soon as we stepped foot on the dunes and saw the naked bodies in various states of repose we knew we were home,” says Hollon, a Toronto-based performer and activist union member. “Undressing in front of strangers can be intimidating the first time. Here, where it was encouraged but not enforced, we didn’t feel any shame.”

This summer, prospective beach-goers to Hanlan’s Point were heartbroken by extensive flooding that left swathes of Toronto Island Park submerged for most of the summer.

Island ferries were closed to the public on May 4 thanks to rising water levels and heavy rains. On July 31, Hanlan’s and the rest of the Toronto Islands reopened to the public, however there have been reports of West Nile virus found in mosquitos on the islands.

“Portions of some beaches will be in a reduced state,” the city said in a news release. “Signs will clearly indicate areas that are closed to the public.”

Though not ideal, the partial reopening will be a relief for nude sunbathing enthusiasts, naturists, and others who were scratching their heads for want of an alternative. Hanlan’s, after all, is one of two officially designated clothing optional beaches in Canada (the other is Vancouver’s Wreck Beach).

When it flooded, Toronto lost more than a sunbathing spot.

“Hanlan’s helped me learn to love my sexuality, my body, my whole self,” explains Hollon, who was overweight in elementary school and has struggled with body image for much of his life. “It strengthened the bond between my husband and myself and I’ve made so many lasting friendships with like-minded thrill seekers.”

Gawkers may just see naked flesh – still a strange sight in a society that can’t deal with women going barebreasted in public – but to Hanlan’s regulars, especially queer people and naturists, the beach means so much more.

“You don’t need to be a certain level of ‘fit’ or ‘toned’ to enjoy being nude on Hanlan’s,” Hollon adds, referencing gay dating app body categories. “The beach is for everybody and no one is shamed for how they look, or what they do or don’t wear.” 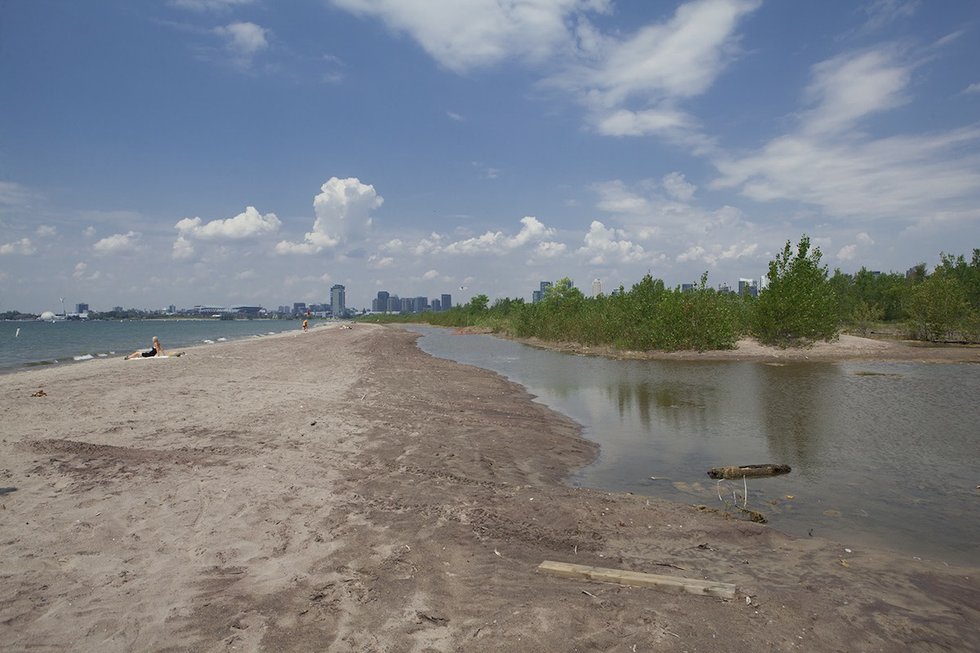 In 2014, the Federation of Canadian Naturists (FCN) director-at-large Karen Grant visited Hanlan’s as part of a family trip to Ontario from Alberta.

“It was special for me because I was able to enjoy Hanlan’s with my then-teenaged children,” she explains. “The appeal of Hanlan’s for naturists is that it is a place where we can enjoy being naturists legally without being hassled by other people or questioned by the local constabulary.”

Nudity was very normal and ordinary for her family by the time her children were born – at home and at the beach.

“It gave my growing children the ability to respect and accept all people,” Grant says. “They are fierce when it comes to body shaming and have no time in their lives now for people who make assumptions and/or suggestions about why a person is shaped as they are, and they are now in their twenties.

“I have healed from some of the psychological wounds and stereotypes that my generation created regarding what is the ‘acceptable appearance’ of a normal, healthy human body,” she continues.

The FCN works to promote nudist and naturist spaces and events throughout Canada, and become a resource to turn to when Hanlan’s closed.

For beach alternatives in Toronto, Grant recommends Beechgrove Beach, part of East Point Park, south of Lawrence at Kingston Road in Scarborough. Beechgrove, she says, “has an unofficially sanctioned nude area that has been used this way for something like the past 30 years.”

Keep in mind, however, that Section 174 of the Criminal Code of Canada criminalizes those “nude in a public place.” If a prudish killjoy calls the police, wanting an all-over-tan will not work as a tenable defense to what is unfortunately still considered a criminal act: being naked.

Still, enterprising nudists do what they can get away with.

“Many beaches have unofficially sanctioned areas,” says Grant. “Just check with the locals when you visit a beach! Of course, there are the naturist venues such as Ponderosa and Bare Oaks, which are privately owned.”

Canada has quietly enjoyed a tradition of naturism for centuries, given the practices brought by European immigrants and, later, soldiers who experienced nude sunbathing in Europe during the World Wars. 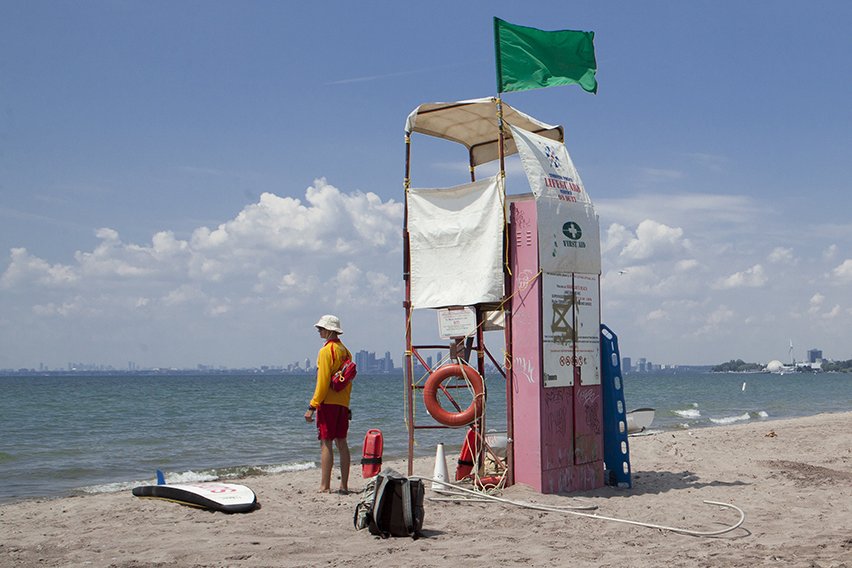 For most of the 21st century, Hanlan’s had been an unofficial clothing optional beach, and Southern Ontario had a handful of nudist and naturist social groups such as Ontario Roaming Bares, the GTA Skinny Dippers, TNTMEN (Totally Naked Toronto Men), a queer naturist group, and the FCN.

Hanlan’s became clothing optional in the late 90s. TNTMEN had been petitioning the city to apply the designation with the help of a lawyer, and a group of activists came together in 1998 as the Hanlan’s Point Naturists, and managed to get the city to adopt a clothing-optional policy as a one-year pilot project in 1999.

Beyond TNTMEN, Hanlan’s has always been a destination for the LGBTQ community. Queer couples make use of the beach, and trans-identified people number among the attendees perhaps because of a perception of safety that is backed up by a city report.

After the city extended the clothing optional designation by two years, officials found it had a positive impact on beach attendance, with a peak of up to 700 visitors on warm, sunny weekend days, and ferry ridership, and no safety issues beyond those faced on a typical beach.

“There appears to be support for the beach and an understanding that this type of beach can exist in harmony with textile, or clothing required beaches,” a 2002 Director of Parks and Recreation report stated.

The official clothing optional designation was adopted soon after.

For nude sunbathers and other park visitors, erosion has been a looming threat for years and high water levels have only worsened the situation.

“It’s been obvious that we’ve literally been losing ground every year,” says Hollon. “What were dunes when I first started visiting turned to sheer cliffs last year. The trees that lined the beach have been falling into the lake like dominoes. The damage this year will probably forever change the face of Hanlan’s, which makes it even more precious.” 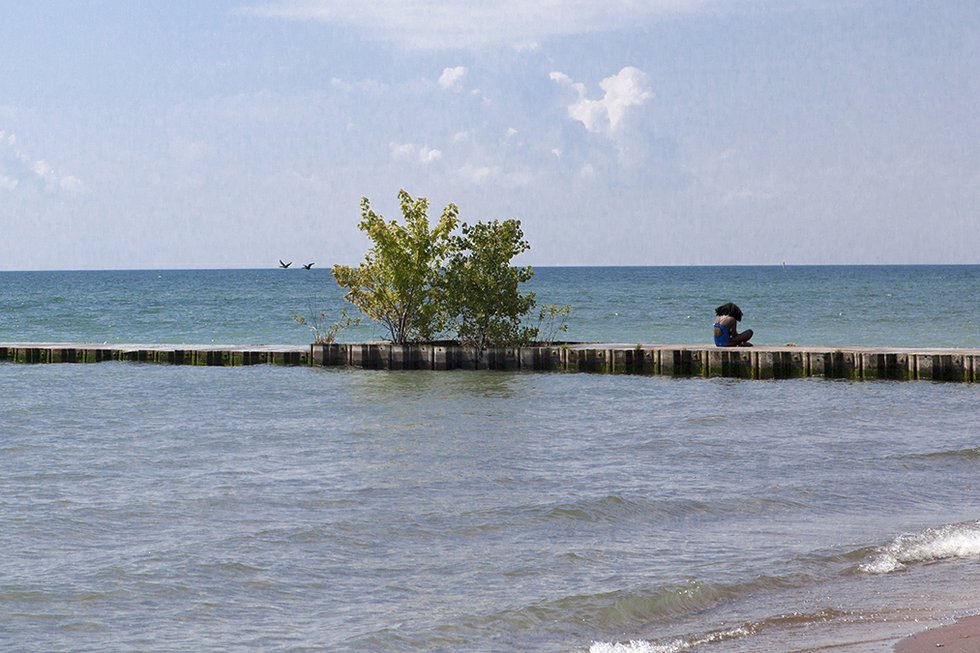 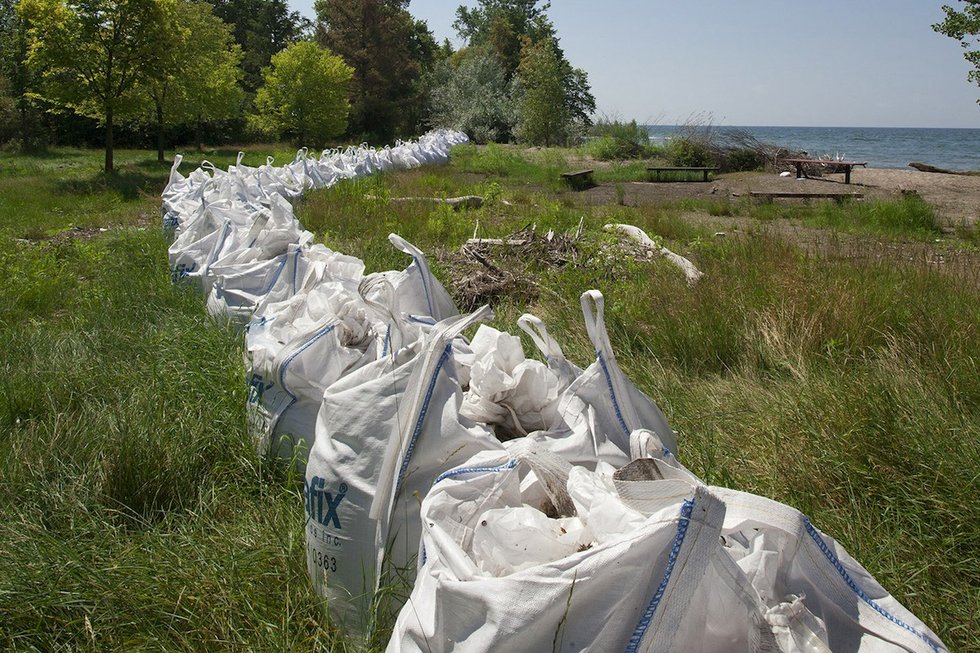 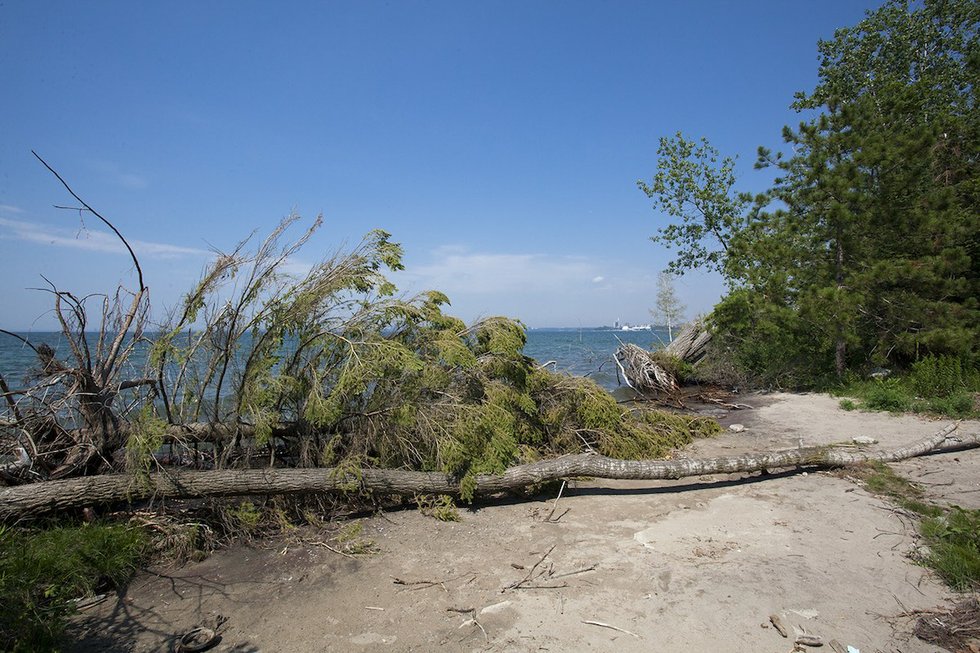 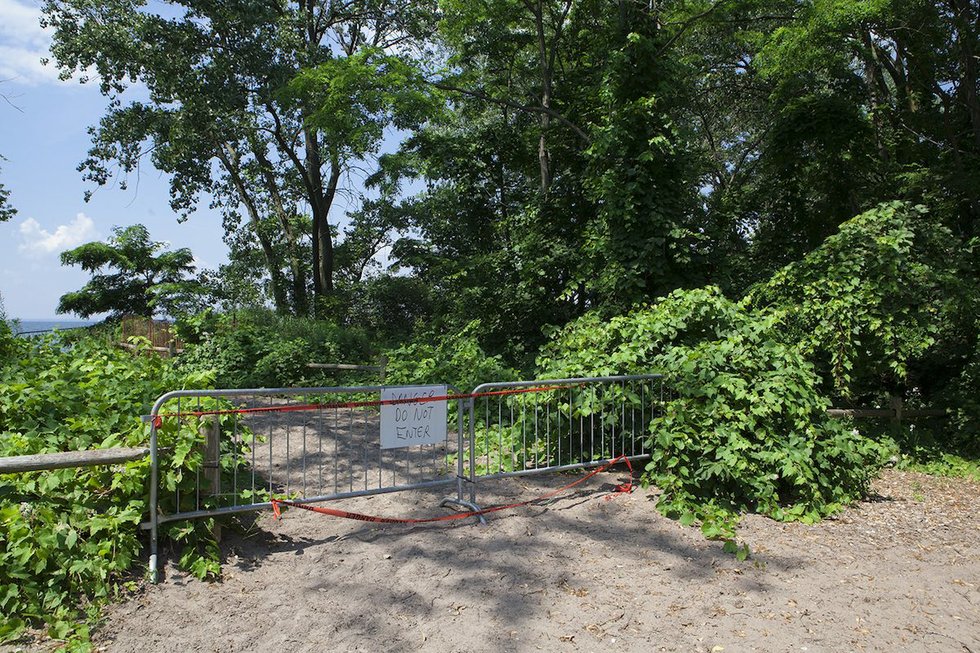 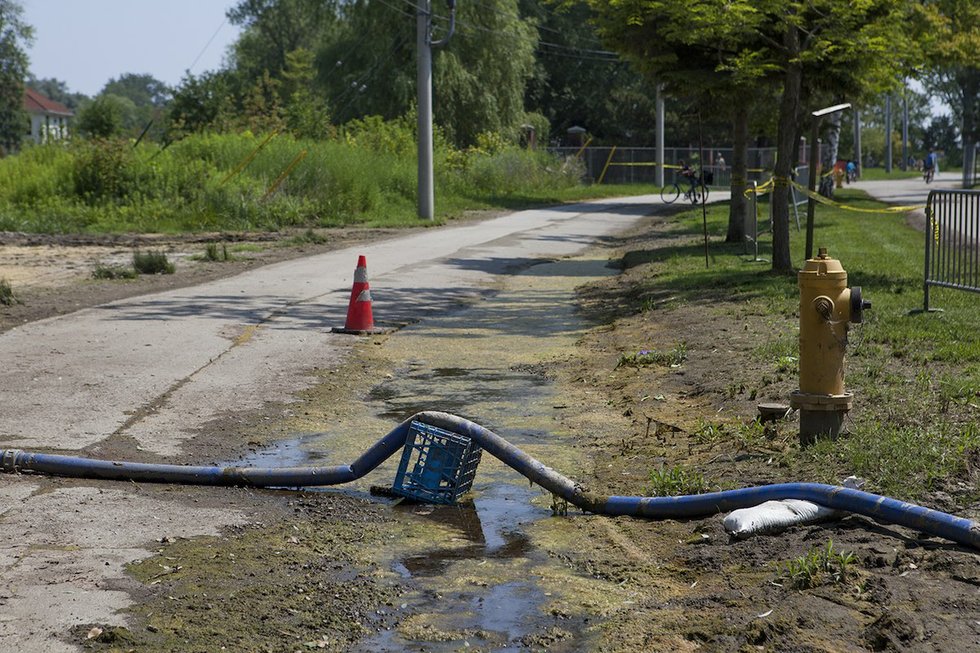 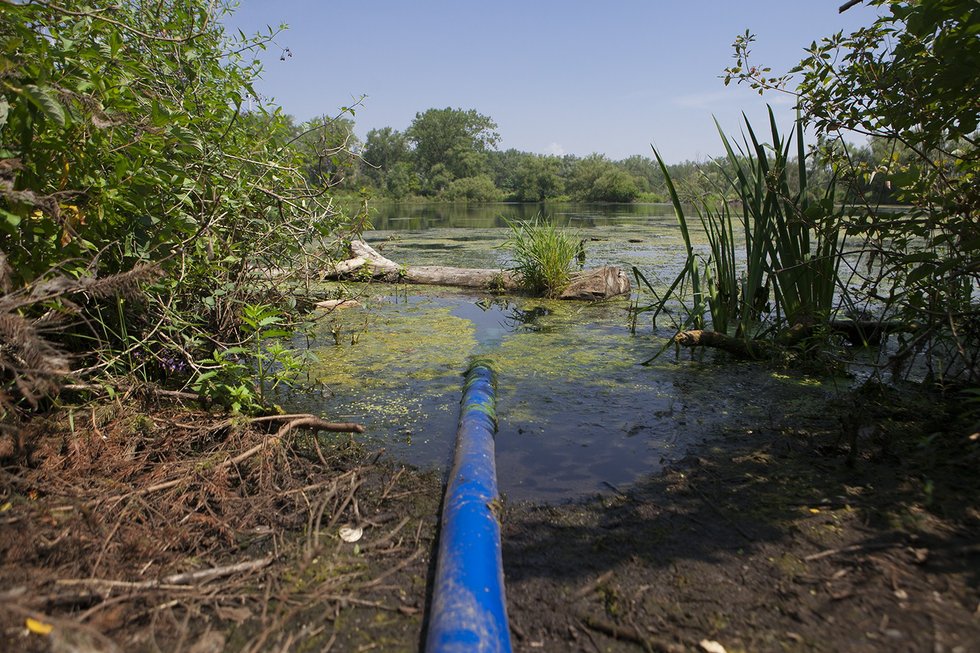 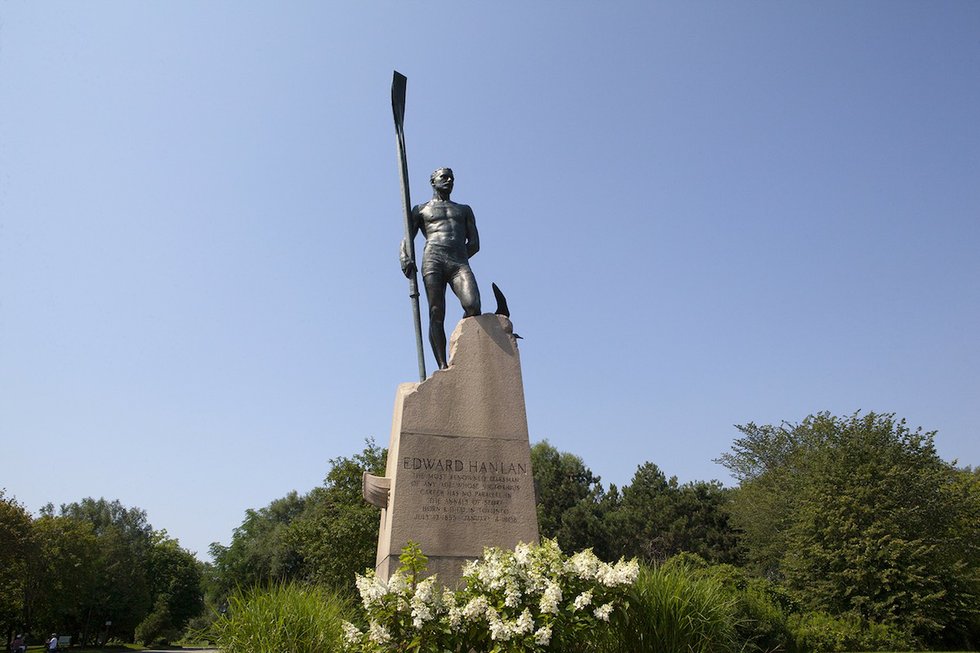 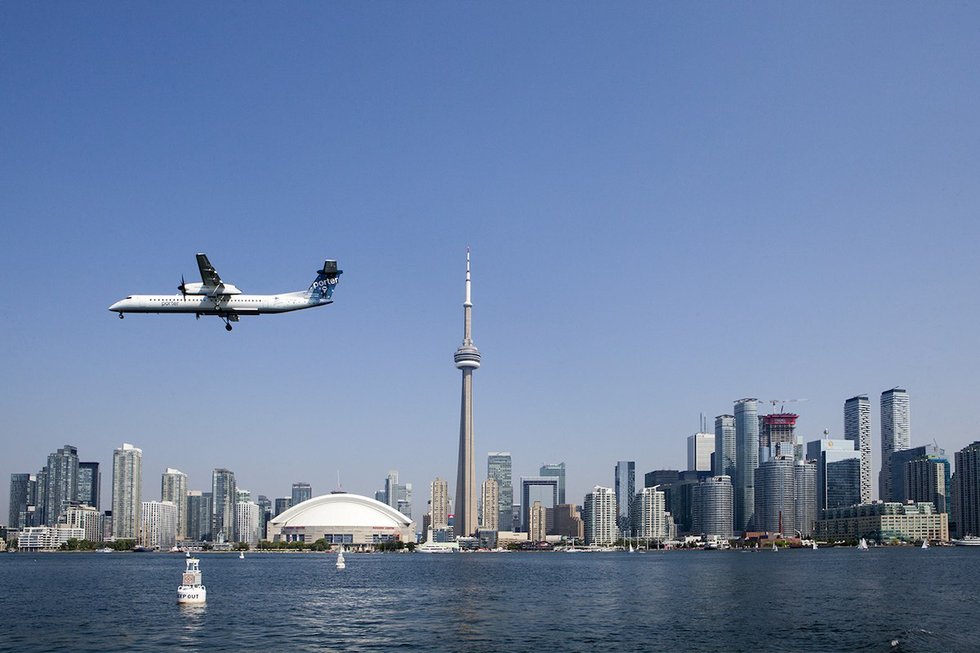