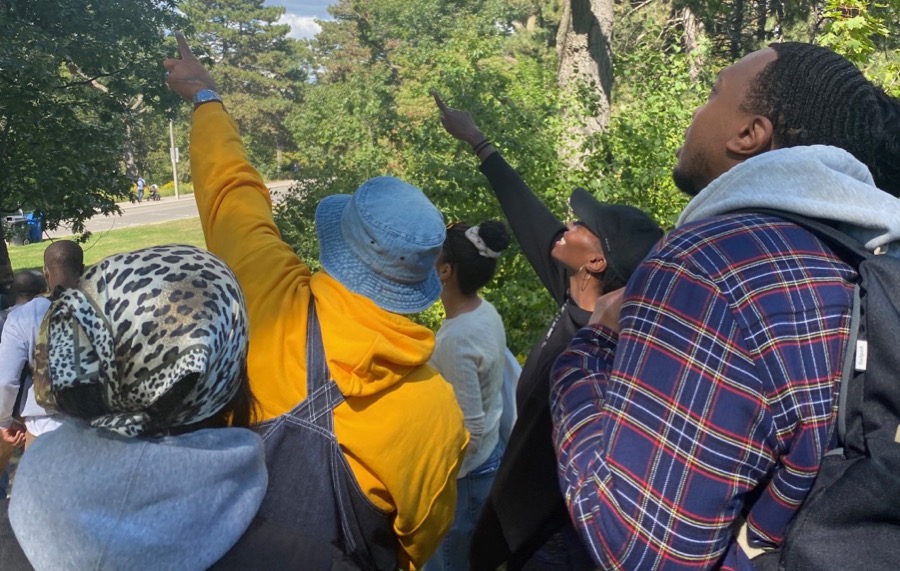 A dozen people met up this past Sunday to go birdwatching in High Park. It’s a fairly commonplace nature outing, except that the group was composed entirely of people of colour. They were out with Flock Together, a British birdwatching collective that launched its first international chapter in Toronto last week.

As the group peered through binoculars to see the birds flying around Hawk Hill, they realized many of them had never convened in nature like this before.

“A friend of mine reached out who wanted to join the walk. She said she went birdwatching one time and felt out of place because it was just a bunch of white men with khakis on,” said Kazeem Kuteyi, the organizer of Flock Together’s Toronto chapter. “I feel like with this new initiative, we’re about to normalize Black and Brown folks in nature. Nature is free. Why can’t we take up space in it?”

Kuteyi, who runs a cultural agency called New Currency, met Flock Together founder Ollie Olanipekun in London three years ago. When they wanted to expand the collective, he reached out to Kuteyi and the Toronto chapter was created.

“I always try to anticipate the needs of the community and I felt like people in Toronto needed this,” said Kuteyi.

Olanipekun and his co-founder, Nadeem Perera, were profiled in Vogue earlier this month. He spoke about the necessity to make birdwatching as accessible as possible to people living in cities or who don’t grow up with a connection to nature.

They had their first walk in June and now have over 100 members. Aside from Toronto, the group is expanding to Tokyo, Accra and Amsterdam and once international travel is safer, members will be encouraged to join walks in sister cities.

“They’re trying to be a global support network,” explains Kuteyi. “They’re trying to make it accessible to folks that look like us and also provide mentorship and accessibility to mental health support but using nature as a background.”

When Kuteyi mentioned to his friends in Toronto that he was going birdwatching, their response was to call him white – indicative of prevalent ideas about who outdoor spaces are for and who explores nature.

Flock Together Toronto members of all ages come together for a group photo.

Kuteyi and many other people who joined in the first walk had never been birdwatching before. Luckily, they were joined by two bird enthusiasts, including Michèle Pearson Clarke, Toronto’s photo laureate, who led the walk.

“It was really interesting to have [Clarke] there,” he says. “And I think that’s what’s going to be interesting about Flock Together Toronto, just that it allows people from different walks of life to come and hang out and just have them leading the project collectively. It’s not a Kazeem project, it’s our project.”

The group is planning a second walk in October, with dates announced closer to the event. The locations are shared privately when members RSVP to keep numbers low as a health and safety precaution.