NOW MagazineLifeHealthThe pandemic isn’t over, but why are some people behaving as though it is?

The pandemic isn’t over, but why are some people behaving as though it is?

As you reconcile your own understanding of the COVID-19 threat, it's important to remember you've chosen to be a part of collective change 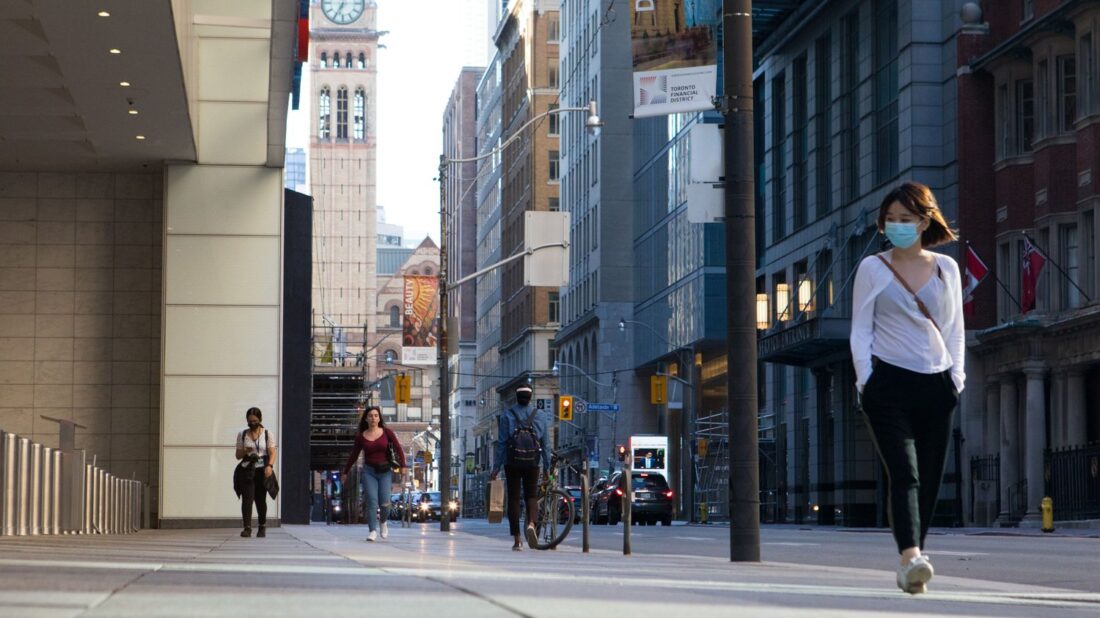 When Toronto entered stage 2 of reopening on June 24, the floodgates opened: restaurant patios filled up, beaches and streets were packed, people lined up outside the most mediocre of bars, many refusing to physically distance and not bothering with face masks.

The statistics don’t offer an encouraging picture: that day, Ontario had reported fewer than 300 cases for two consecutive weeks, but the number of cases confirmed on June 23 was the highest since June 13. And with many of the province’s new daily cases coming from Toronto, it’s hard not to feel as if entering stage 2 is a risky choice that’s based more on economic reasons than health-related ones.

Public health officials have released guidelines that encourage continued distancing and mandate masks indoors, and they have made it clear that it’s better to gather outside than inside and are capping gatherings at 10. But reopening sends the message that these measures are not necessary, and that the pandemic is less of a threat than it was before. Even though cases in the city are going down, new ones are still appearing each day, meaning the virus is still spreading.

It’s left much of the city divided: there are those who are continuing to live in lockdown as if there has been no stage 2, rarely leaving their homes. And then there are those who are embracing stage 2, returning to some semblance of normal life, with face masks more of an option than a necessity and the impact on everyone from essential workers to servers disregarded.

This split in public behaviour has created a divergence of realities, with the first group feeling a sense of “gaslighting” for being “extra” cautious while the rest carry on as has been okayed by the government. But there is no purposeful psychological manipulation at work here, leading to many of us wondering: Am I the one who is misunderstanding something, or are they?

“I don’t know that gaslighting is the best term to describe the phenomena. Trust as it relates to scientific information and public health is an intersubjective thing, it’s not a feeling that you hold yourself,” explains Suze Berkhout, a clinician at the University Health Network Centre for Mental Health. “Trust in relation to facts communicated by public health officials has a lot to do with our sense of larger public institutions as being trustworthy, and depending on your positioning, this trust may be stronger or weaker.

“But there is also an issue of risk perception here, and that ties to collective action,” she adds. “When we think of ourselves as individuals only, it’s easy to dismiss public health information – even if we do trust it – as not applying to us. In this kind of situation, it can’t work to take that ubiquitous western philosophical stance of individualism, as public health is a collective-action issue.”

Choosing to follow public health recommendations, then, is about seeing yourself as a part of a larger whole. Wearing a face mask is more about protecting others than protecting yourself.

The choice comes down to thinking intellectually versus emotionally. Those of us who are making an effort to wear masks in public are being logical and using our frontal lobes, and that allows us to control our emotional states to some degree and make decisions based on facts and data.

But, says Steve Joordens, a professor of psychology at University of Toronto Scarborough, “It’s important to understand that humans are more driven by emotions than we think. Many people are living in a state of anxiety, which usually shuts down the frontal lobes. Some of us are able to overcome that, but there’s so many out there that are more emotional right now.

“They might think of masks as signs of weakness and feel we’re overblowing everything,” he says. “The fact is there are some people who really can’t deal with the world changing and, for some, it might be a fear-based denial. Once you wear a mask, you’re not denying what is happening, and that’s scary.”

So it’s not so much that those people you’ve seen in grocery stores badgering employees and refusing to wear masks are doing so because they feel this safety measure goes against their rights and freedoms, but because they’re seeing the mask on an emotional level.

“That’s why we see public health people saying, ‘This isn’t about protecting you, this is about respecting other people,'” Joordens adds. “That’s a way of making it less ‘You’re not a weakling because you’re wearing a mask, you’re a nice person who cares about others.’”

Many of those disregarding safety measures have appeared to be younger, and while it is true that older people are being far more impacted by the pandemic, that doesn’t mean teens and 20-somethings aren’t playing a role in community spread.

“It’s like they’re gambling with our money,” says Joordens. “But I think many of us who are feeling like that have forgotten what it’s like to be 20. This isn’t a defence, but that is the point in our lives when we are focused almost 100 per cent on our social world. They’re looking for life partners, that’s when most of us met the friends that are our realest and deepest. So, for them, it’s pretending the virus isn’t happening.”

The tricky thing is that some of the people who are debating taking cross-country road trips or going Friday night patio-hopping are our friends or family. Suddenly, it feels impossible not to judge each other. While we can hope for more aggressive public health recommendations, or for them to be more widely and publicly shared perhaps in the form of commercials or advertisements, it’s fruitless to continue reminding them of facts, which they’ve already chosen to look past. Instead, try appealing to them on an emotional level, telling them how they appear to others when they disregard the severity of the pandemic.

It might sound futile, and maybe in most cases it will be. The key thing to remember as you reconcile your own understanding of the pandemic as compared to those around you is that you’ve chosen to be a part of collective action and you will make a difference.

“Those of us who feel this way should realize our value and the role we’re playing,” says Joordens. “Herd immunity is kind of crazy, the goal really isn’t for nobody to get this, but for people to get it at a rate where we can handle and control it. We talk about stage 2 as though everybody was going to follow it, but that was never going to happen.

“It’s great that so many of us are saying we’re not quite ready for it yet, because the way to look at it is a gradual release. It’s when we see those large gatherings, when people collectively give up, that the fires start.”