NOW MagazineLifeHealthCOVID-19: What the second wave could look like in Ontario this fall 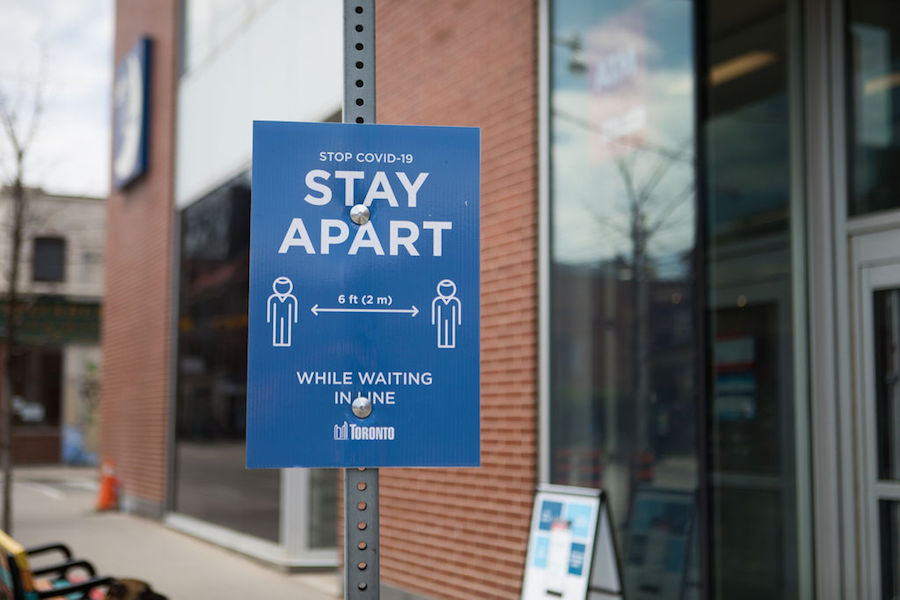 Ontario is one of four provinces in Canada that Prime Minister Justin Trudeau declared has entered the “second wave” of COVID-19. In a televised speech on Wednesday, he suggested large family gatherings for Thanksgiving will likely be impossible if the country was going to keep new infections under control.

As the province expands testing centre capabilities and Toronto cancels all major outdoor city-led events until the end of 2020, Ontario is preparing for a second wave.

But what exactly will the second wave look like for hospitals, schools, businesses and Ontarians everywhere?

“Wave isn’t a scientific term. We like to think of them as resurgences more than waves. And the reason for that is, when you say ‘wave,’ people assume there’s something intrinsic about the virus that responds to seasons,” says Raywat Deonandan, epidemiologist and associate professor at the faculty of health sciences at the University of Ottawa.

“Surges happen in response to human behaviour. So the numbers went down because we locked down and people didn’t interact, and the numbers are going up again because we are interacting more.”

Deonandan says around two-to-five weeks after the surge in cases start being measured, there might be a rise in hospitalizations, followed by a rise in deaths.

“We haven’t seen that yet, and we might not,” he says. “Most of the growth in cases right now are in young people, and younger people are much less likely to be hospitalized and less likely to die.”

Kanna Vela, an emergency physician at the Scarborough Health Network hospital, believes that hospitalized cases will be a major concern during the second wave in Ontario due to it being flu season soon.

“Even before COVID, our hospitals in Canada during cold and flu season run over capacity,” she says. “So if we got our normal flu season plus COVID on top of that, we’re definitely going to be facing a lot of challenges with respect to capacity and being able to treat everybody safely.”

“Colds and flu have many of the same symptoms as COVID. That’s going to confuse a lot of people and put a large demand on testing capacity,” he says.

Deonandan also notes that while asymptomatic people previously were at least a little less likely to transmit the virus through droplets from coughing or sneezing, an asymptomatic person with COVID who also has flu symptoms would be just be just as likely to spread the infection.

Businesses will remain open despite what doctors say

Deonandan hopes our public health infrastructure will be strong enough to slow the spread, though he notes success will depend on a couple important actions.

“The mask wearing, the distancing and the foreseeable closures of things, like bars and nightclubs and maybe even universities, will slow it down significantly so that we won’t reach the same heights,” he says.

In a statement issued by the Ontario Hospital Association (OHA) on Thursday, 38 doctors called for the provincial government to implement stricter restrictions on “non-essential businesses and activities that facilitate social gatherings and increase opportunities for exposure.”

This includes restaurants, bars, gyms and non-essential businesses. They also wrote that universities and colleges should offer classes online wherever possible.

Mayor John Tory said during a city hall briefing on Wednesday that he would support curfews for bars and restaurants, along with “further action” to limit weddings and other large social gatherings.

Premier Doug Ford has yet to reinstate any business restrictions. In a press conference on Thursday, Ontario’s associate chief medical officer of health Dr. Barbara Yaffe said the province was taking a more “targeted approach” to the rise in cases in response to the statement from the OHA.

The provincial government has been focusing on test centres, but will make saliva-based antigen tests available at up to 60 pharmacies for asymptomatic people.

The province updated testing guidelines on Thursday to shift away from un-targeted asymptomatic testing. Public health officials mandated that only those who are showing COVID-19 symptoms or have been exposed to a confirmed case should seek testing.

Starting on Friday, asymptomatic individuals can also get tested at the new pharmacy testing centres if they are eligible for testing as part of a targeted testing initiative through the ministry of health or ministry of long-term care.

Vela says the long lines and delays at testing centres are a major challenge.

“You’re either allowing people to spread COVID because they just haven’t had the test or haven’t gotten their test results back yet, or there are people who don’t have COVID, who could go back to school or work but can’t be cleared because they don’t have the results or can’t do the test,” she says.

Either way, Vela notes the delays are not efficient, and no matter how many testing centres there are, the backlog still remains at the shared labs analyzing swabs across the province.

Jeffrey Pernica, head of the division of pediatric infectious disease at McMaster University, predicts we’ll be talking about COVID-19 for months and years to come.

“Even if somehow a vaccine gets made faster than just about any vaccine ever has been made, it’ll still take ages to be able to produce enough vaccine,” he says. “And don’t forget that it hasn’t been tested in children yet.”

He thinks case counts will fluctuate in the months to come depending on a variety of conditions.

“I think it’s going to wax and wane. The counts are going to go up, and then as there’s sort of more restrictions, and maybe nicer weather, they’ll come down.”