Why face masks will become the new normal in Canada

As the pandemic continues, social distancing is bound to change the way we move and interact in the urban landscape 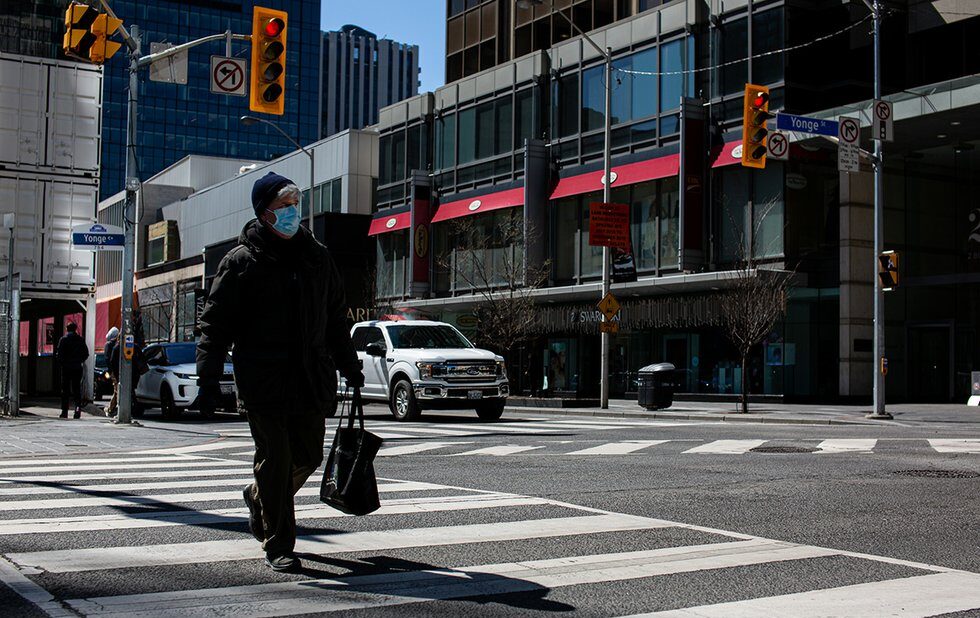 A few weeks into the start of self-isolation measures, I found myself resisting the idea of wearing a face mask. It made me uncomfortable and, frankly, I felt embarrassed.

It was early days in the COVID-19 crisis, so I rarely saw others wearing masks. Two months in, I won’t step foot in a grocery store without a mask and the majority of people I see are also sporting one – and a pair of gloves. Now I feel uncomfortable when I’m not wearing one.

That’s how quickly perspectives change, and words like “PPE” and “N95s” become household terms. But how long will these attitudes last? With the pandemic predicted to resurface in waves and as early as this fall, it’s unlikely isolation measures will go away entirely any time soon. Social distancing is bound to change the way we move and interact in the urban landscape.

“We’ve seen recommendations regarding wearing face masks change in Canadian cities over even just the last month,” notes Shauna Brail, associate professor of urban studies at the University of Toronto. “It was said that it’s not required and that we should make sure to preserve all medical masks and PPE for people working on the frontlines, and now they are recommended.

“Things are changing rapidly as we learn more and the situation evolves, so the degree to which we begin incorporating PPE into our everyday lives could look different very soon,” she adds. “I do think we’ll see a long-term impact in terms of people continuing to wear masks for protection for at least the foreseeable future.”

Of course, there are several types of masks, including the N95, which keeps almost every particle out, and is prioritized for health-care workers. Non-medical or homemade masks have gaps big enough for the virus to pass through or around, but protects others from the mask-wearer’s sneezes or coughs. Public health officials recommend those masks for people who choose to wear one.

Health Canada has offered specific guidelines on the appropriate use of non-medical masks, but they have not been proven to protect the individuals wearing them and are not a substitute for physical distancing and hand washing. The World Health Organization says you only need to wear a mask if you’re taking care of a person with COVID-19 or are coughing or sneezing.

Although not mandatory in Toronto, Mayor John Tory told CP24 on April 30 that required use in certain settings, such as stores, restaurants and transit, is on the table.

In the meantime, the province has released workplace safety guidelines, in which PPE is labelled a “last resort” for several sectors, including retail, grocery stores and hospitality. In cases where direct contact is essential and unavoidable, staff are encouraged to consider using PPE and, in those instances, must be educated on proper use.

The federal government has announced all air travellers will be required to wear a non-medical mask or face covering concealing their nose and mouth while in Canadian airports and on flights arriving or departing the country.

That could just be the start for Canada, with other countries around the world already taking greater measures.

In late March, the Czech Republic and Slovakia became the first European countries to make masks mandatory in all public spaces. By early April, Turkey and Austria joined them. Paris, too, which saw great resistance to masks in the early days of lockdown, and where Asian tourists were largely the only ones sporting them (to much racist hostility both there and in North America), has since seen several cities require citizens to wear masks in public.

In East Asia, wearing face masks was already an accepted cultural norm well before the pandemic, and as early as the 1920s. Many people there wear masks when sick as a courtesy to others, during flu season and to protect themselves from air pollution. Masks became even more common after the 2002 SARS outbreak in China, which is when the custom also crossed over to immigrant Asian communities in Canada and the U.S.

It’s so commonplace that many in East Asia wear masks as a general social-distancing method in efforts to avoid unwanted attention or solicitation or even as a style choice, with one Chinese fashion designer having created a now infamous “smog couture” line in 2014.

So it’s not unlikely the rest of the world might one day adopt similar attitudes. Consider Slovakian president Zuzana Caputova, who wore a red face mask to match her dress during a recent swearing-in ceremony. Or the many design companies and independent artists working to create their own lines of customized masks with unique designs and graphics.

This shift could also present the sort of legislative changes that, for example, could reverse the 2017 ban on public employees wearing religious symbols in Québec, where face masks have been recommended in all public spaces as of earlier this week. The ban is a regulation that many human rights and Muslim groups have taken aim at, and have criticized for targeting hijabs, niqabs and turbans. Similarly, in 2011, France banned full-face veils in public.

It’s clear that when perspectives are motivated by a health crisis, they change quickly – and, it seems, rather hypocritically.

“There is irony in that,” says Brail. “Will we see requirements and not just recommendations that will trigger important regulatory changes? If that happens in a place like Montreal, it will require both the rescinding of a current regulation and the adding of one, which is a real societal shift. I think these kinds of habits will become much more common in the West instead of something that we’ve been known to culturally resist.”

If this shift toward mask wearing continues to progress, it will also mean a greater public health education and design innovation in terms of materials and how masks can be worn.

“We will see people with disposable gloves in their purses or cars on their everyday routine,” says Brail. “But this equipment is only as sanitary as you keep it. We need to also learn how to use and store it properly. If you’re wearing the gloves and mask and you’re touching your face incessantly and other things, and then you’re re-wearing it, it’s not going to do its job.”

While it’s difficult to imagine wearing face masks to dinner, parties or the movies, future protocol will most likely be based on proximity and individual choice depending on the environment. While you won’t be able to fly without a mask, it’s more likely you’ll be seated a few seats apart at a theatre, or that workplaces will veer more towards cubicle style than open concept. And that when you reach for gum or change in your bag, you’ll find a pair of gloves as well, “just in case.”

Either way, the motivation behind wearing a mask or gloves remains solidarity – to protect yourself and those around you. Whether that’s a sentiment that will last remains to be seen.

Listen to our NOW What podcast episode Face Masks, Fashion and Safety below: