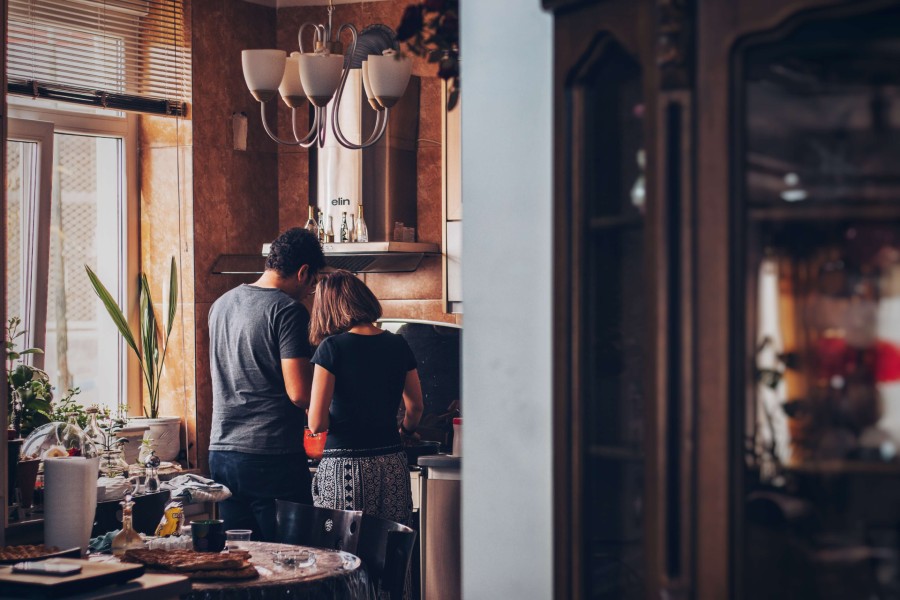 One evening during the lockdown, Toronto comedian Anne McMaster was preparing dinner for her son and ex-husband in the home they used to share as a married couple.

She heard a knock on the door. When she answered, she received the separation agreement she and her ex had to complete to finalize their divorce. It was just one moment where the reality of her living situation – living with her ex-husband to take care of their son during the pandemic – really set in.

“It’s been so surreal,” McMaster says. “There are definitely moments where I think, ‘God, how did I get here?’”

When McMaster realized the severity of the pandemic as someone who is immunocompromised, she says she “freaked out.” She made an admittedly unusual choice – she called her ex-husband, who was living in Montreal. Before she even had the chance to finish asking her question, he agreed to move back into the home they once shared to help her with groceries and other errands.

COVID-19 has thrown people all types of curveballs, but the strangest ones might be the unique living arrangements many have found themselves in as a result of the pandemic.

A Finder study in July found that 2.8 million Canadians have seen their living situation change due to COVID-19. In Ontario, that number amounted to more than 1 in 10, higher than any other province.

While a majority of these changing living situations involve adult children moving back in with their parents – often because of financial stress from losing a job or hours being cut – precarious housing and other pandemic safety-related concerns have forced Canadians to make difficult choices about where they live and who they live with. While moving in with relatives or prematurely sharing a space with a significant other might make economical sense, these changes can pose a challenge for interpersonal relationships.

Bronwyn Singleton is a Toronto-based therapist who does relationship and couples counselling. She’s seen the effects of a new COVID-19 living situation on her clients’ relationships with family members and partners.

“Some people feel they’ve been forced into situations that really are undesirable for them and that may create a lot of feelings of being trapped or stuck,” she says. “Some people may be witnessing their parents or partner engaging in behaviours that they’re really having trouble with.”

Maureen, whose asked to withhold her last name for privacy reasons, is a Toronto elementary school teacher who had her mother move in with her and her family when the pandemic began. She was worried about her mother living alone and wanted to make sure she was safe.

“I was most worried about the lack of vigilance she had; we’d be out and she’d be rubbing her eyes. Then she started inviting people over to her place,” she says. “She really struggled with  adapting to how fast the world changed.”

The Finder study reported one per cent of all Canadians have moved back in with their children – just over 278,000 Canadians. An additional two per cent are seriously considering moving in with them.

Even though it was helpful for Maureen to have her mom to watch her daughter while she was working, there were new challenges.

“She drove me crazy,” she says with a laugh. “You know, with a mother-daughter relationship, it can drive you crazy. But that was me being impatient with her because I was feeling the anxiety of the pandemic and she was just not understanding it all.”

For people like Maureen who are living with family members they haven’t lived with for quite a few years, Singleton says old attachment wounds or issues are flaring up.

“Her mom is probably not just lighting her up in the present, but probably lighting up something old, too,” she explains. “One thing we need to be really good at right now is setting and establishing boundaries. Boundaries can be physical, emotional, around all sorts of different things, but we need to clarify our expectations.”

She says boundaries are important for partners as well, especially ones in a new living situation during COVID-19.

The challenge of life together, 24/7

Nicole is a social media coordinator who started living with her boyfriend for the first time because of COVID-19. Though they had plans to move in together by mid-2021, she decided to move in with him short-term for a few months out of concern for her high-risk mother in Pickering.

Nicole was grateful to be able to spend time with her boyfriend and see someone outside of her parents, but COVID protocol made things complicated.

“He was laid off from his job and I was working from home full-time, so we were both home all the time. That was just a lot of together time,” she says. “It wasn’t necessarily a bad thing, but I do really need some alone time and some quiet time here and there. It was weird having someone around constantly. Especially because there was nowhere to go to get away.”

Singleton says this is a common complaint among people living with partners during the pandemic. In general, it’s not exactly healthy for people to spend 24 hours a day with their significant others – pandemic or not.

“I’m telling people to actively do their best to find time apart, and we don’t have the tools to do that really,” she says. “You can’t send your partner off to the gym for two hours anymore so that you get a little bit of peace and quiet, so it is very unnatural.”

Many couples find their threshold for distress tolerance has been lowered, meaning a small annoyance could set someone off, whereas in the past it would take much more to feel bothered. She also notes codependency may arise for couples whose living situation means they have become each other’s only close contacts throughout the COVID-19 pandemic.

Rebuilding old relationships for the better

There are positive lessons to learn from the pandemic. For people who have moved in with family members, friends or partners, relationships are being rebuilt and strengthened in new ways.

Since her ex-husband moved back in, McMaster she says she’s grateful for the friendship they have developed. “Of course, there are reasons why we split up. But all of that just seems so small compared to making sure that our family is okay,” she says. “All that little stuff went away.”

She says this pandemic has taught them a new way of being together, and she’s glad that’s something she’ll be able to carry forward when everything is mostly back to normal.

“I’ve had moments when I’ve just noticed that, hey, I actually really like this person and really like having another parent,” she says.

There have also been some challenging moments that have come with the stress of COVID-19.

“There’s the stress, right? I’ve struggled with anxiety and even some depression during this lockdown over losing my career and losing everything, and he feels stressed, too,” McMaster says.

Singleton says that, positive or negative, she hopes people are reflecting and learning about themselves and their relationships throughout this experience.

“That’s resilience, to be able to inventory your learning and the positives that have come out of the situation,” she says. “I’m thrilled when people are able to bring something from this.”