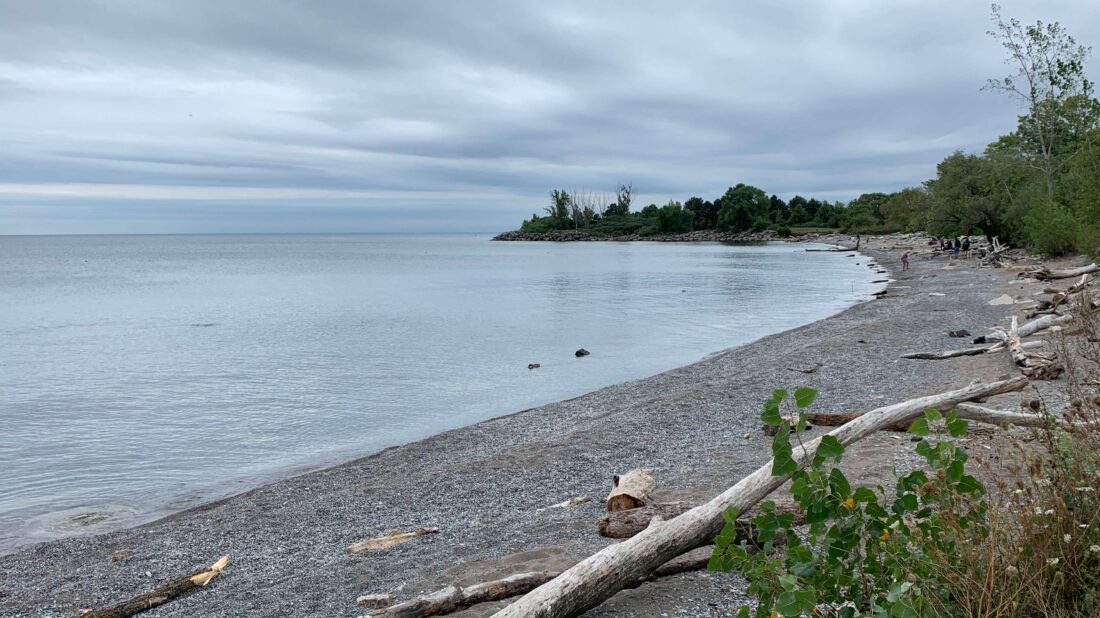 A restful trip to Humber Bay Park East will put everything in perspective.

The days are getting shorter, and there’s a chill in the air. So get outside while you can to clear your head, get some exercise and boost your spirits. In this series, I explore some of the city’s parks and streets. This week: Humber Bay Park East, a gorgeous spot in the city’s west end (okay, it’s in Etobicoke) that provides spectacular views of the skyline and lake.

I’ve been holding off on doing a full Humber River hike until the temperature drops significantly. But while researching it on Google Maps, I spotted two spit-like parks just west of the river’s entrance at the famous Humber Bay Arch Bridge. I cycled along the Martin Goodman Trail to get there. If you’re driving, there’s a paid lot in the park and also one in the companion western park (the Mimico Creek is between them). Or take the 501 Queen streetcar (to Long Branch) to 2155 Lake Shore Blvd West, which is about a 10-minute walk from the lake.

From the Humber Bay Park East parking lot, there are many accessible asphalt paths that take you into the park. But keep in mind that the terrain quickly changes: in some places it’s pounded gravel, in others it’s rocky with what look like repurposed bricks embedded in the ground. Plus there are some sloped sections. 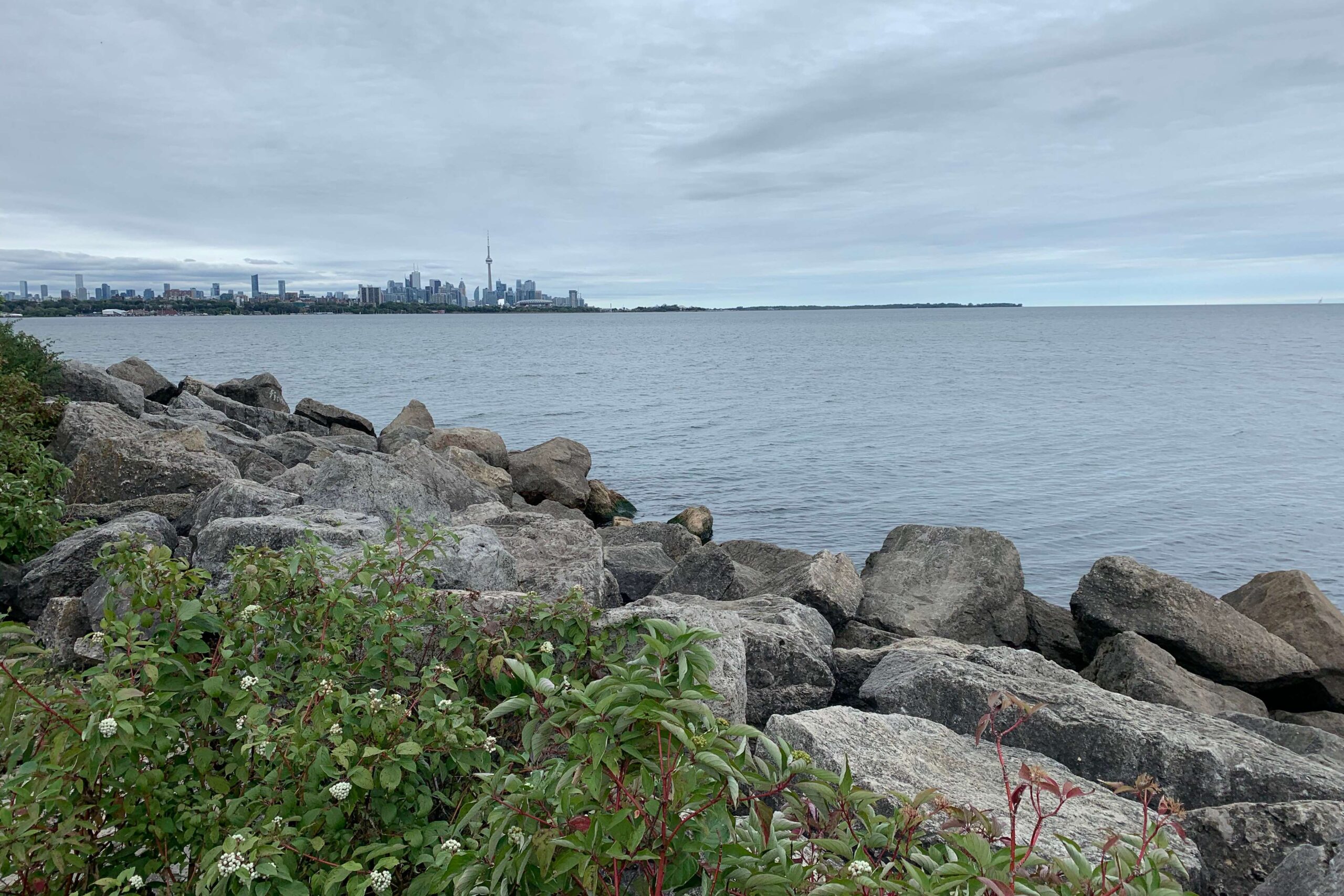 Seeing the Toronto skyline from Humber Bay Park is humbling.

What you can see, and who’s there

The deeper you travel into the park, away from the jungle of the Lake Shore Boulevard condos, the more there is to see. In fact, the Butterfly Garden, where I entered, was pleasant enough – complete with old-fashioned wooden fences, lots of wildflowers, shrubs, trees, grasses and hedges – but it was hard to ignore the skyscraper-like condos looming overhead.

Once you head south, however, there’s a lot more to see. Don’t miss the poignant Air India 182 Memorial, which lists the names of the 329 victims (most of them Canadian) of the 1985 bombing of flight 182. A sundial is pointed in the direction of Ahakista, Ireland, near where the plane went down.

Because I visited on a weekday afternoon, the park wasn’t overly crowded. I saw a few elderly people, many alone, and the occasional parent and child. One man had brought his own dinghy to paddle around in, his unlocked bike leaning against a tree. 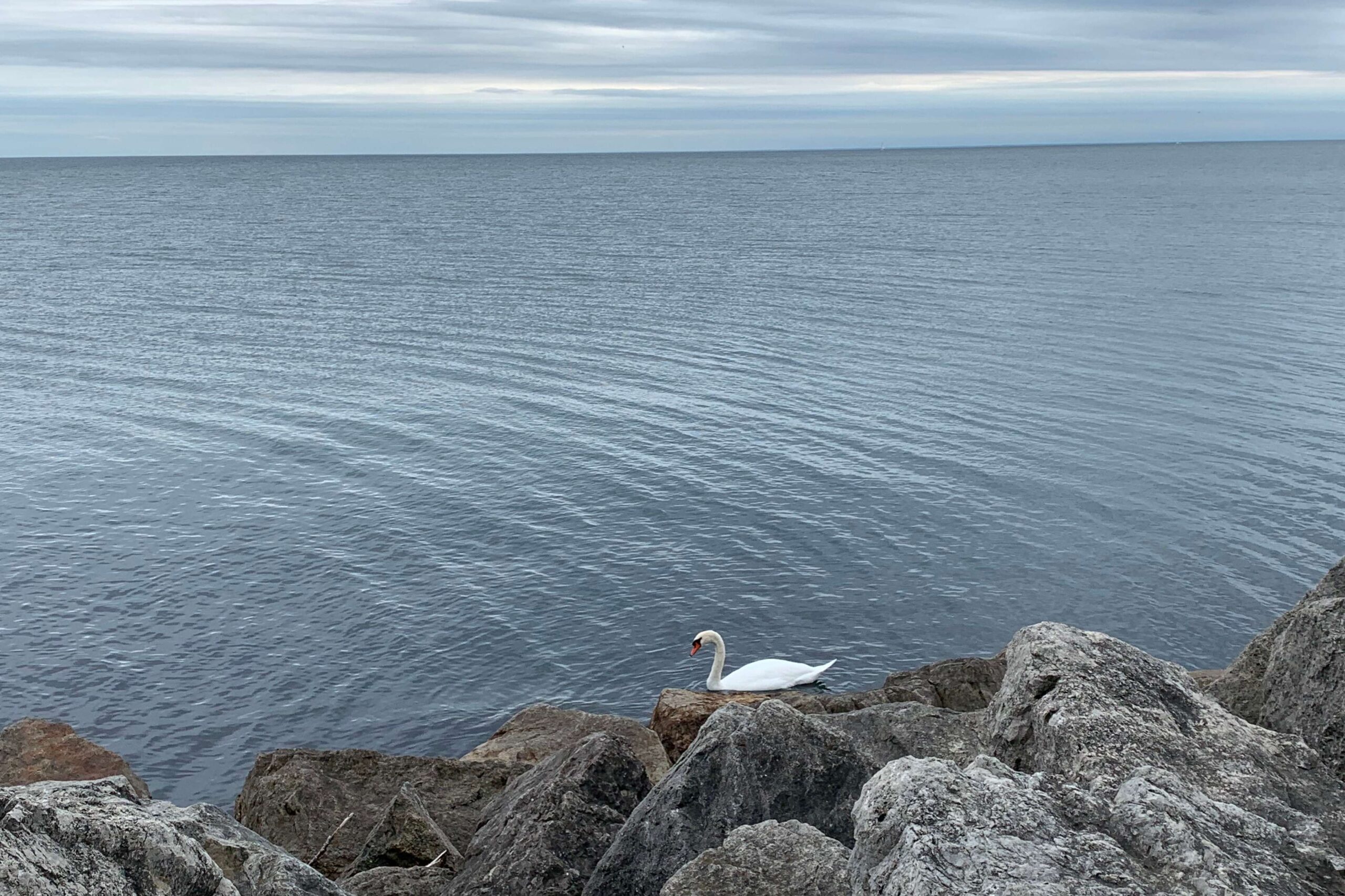 The rocky shore provides many places to sit and contemplate life. Staring at the city skyline can give you a sense of perspective, especially in this uncertain time. If you don’t want to sit on a boulder, there are a few single benches providing spectacular views, and there’s also a section of pebbly beach, the shore speckled with driftwood.

I spotted several cormorants, Canada geese and swans, who all looked as content and rested as I suddenly felt. There’s a wide range of plant life, too. If you can pry yourself away from the water (it’s hard) you might appreciate some of the interior landscapes. With the darkening sky as a backdrop, one section of the park made me feel like I was in a Brontë novel, roaming the moors. 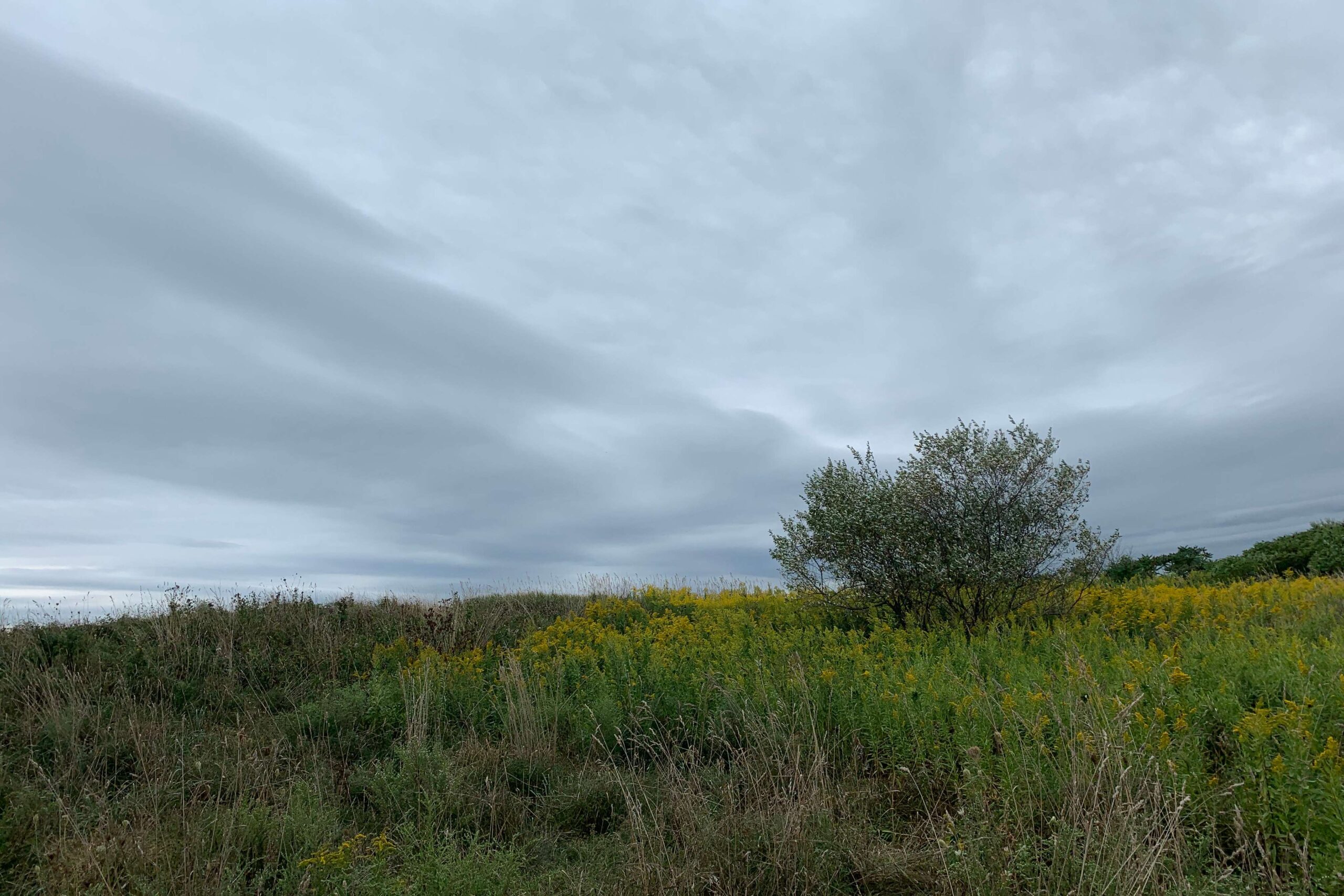 This interior landscape in Humber Bay Park might almost convince you you’re in Brontë country.

Dogs must be leashed, and there are many no-campfire signs, but I saw the charred remains of a few rogue fires. Like Tommy Thompson Park, the spit on the opposite side of the city, there are several pedestrian only trails where you can almost get lost. Otherwise, it’s fairly easy to complete the looping 2.6 kilometre path in under an hour, keeping in mind you’ll want to sit or stop a few times to appreciate the views.

It’s fitting that I ended my walk near two plaques in front of trees planted for Gregory Rich and Jerry Belan. Landscape architect Rich, who died in 2010, was instrumental in adding the Humber River to the Canadian Heritage Rivers System and improving the river ecosystem. Belan, who also died in 2010, helped develop the City of Toronto’s Discovery Walks program.

A community spirit surrounds both this park and the neighbouring Humber Bay Park West, which includes a public boat launch. I got that sense from the see-through plastic garbage bags attached to some trees in the park. And nestled on a few benches I spotted green tins for cigarette butts labelled “Friends of Humber Bay Park.”

Plans are afoot to revitalize Humber Bay Park East and West and make them more popular destinations. The increased accessibility will be nice, but the parks will probably lose some of their rugged charm. So visit them soon. I hear the sunrises are amazing.