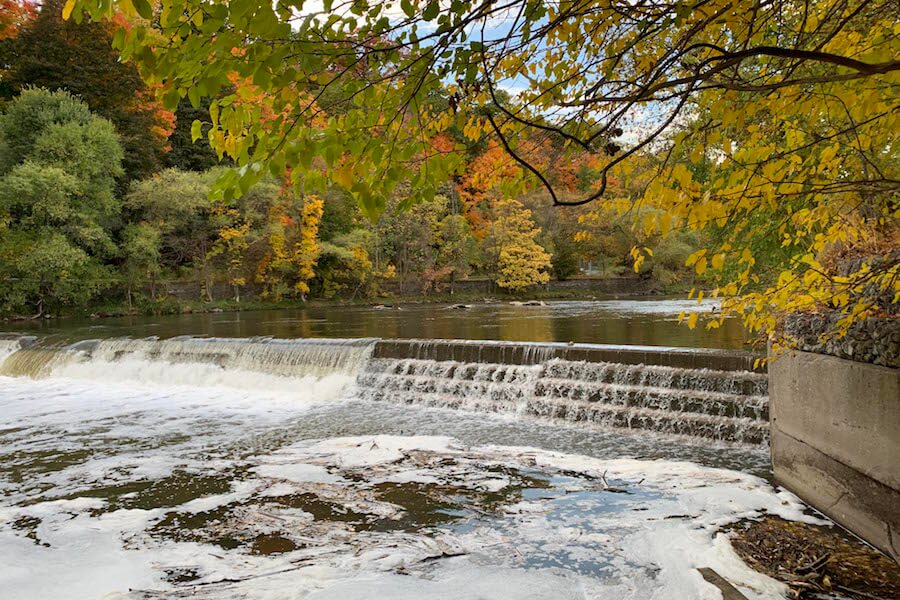 Staring into the Humber River will make you forget your pandemic worries.

Now that the pandemic’s second wave has arrived, it’s more important than ever to get outside to exercise and clear your mind. In this series, I explore some of the city’s parks and streets. This week’s walk: the magnificent lower Humber River – at least the southern part of it, which goes from Lake Ontario up to Dundas West. The eight-kilometre route took me about two hours to walk, including retracing my steps to see if I’d missed a cutoff. 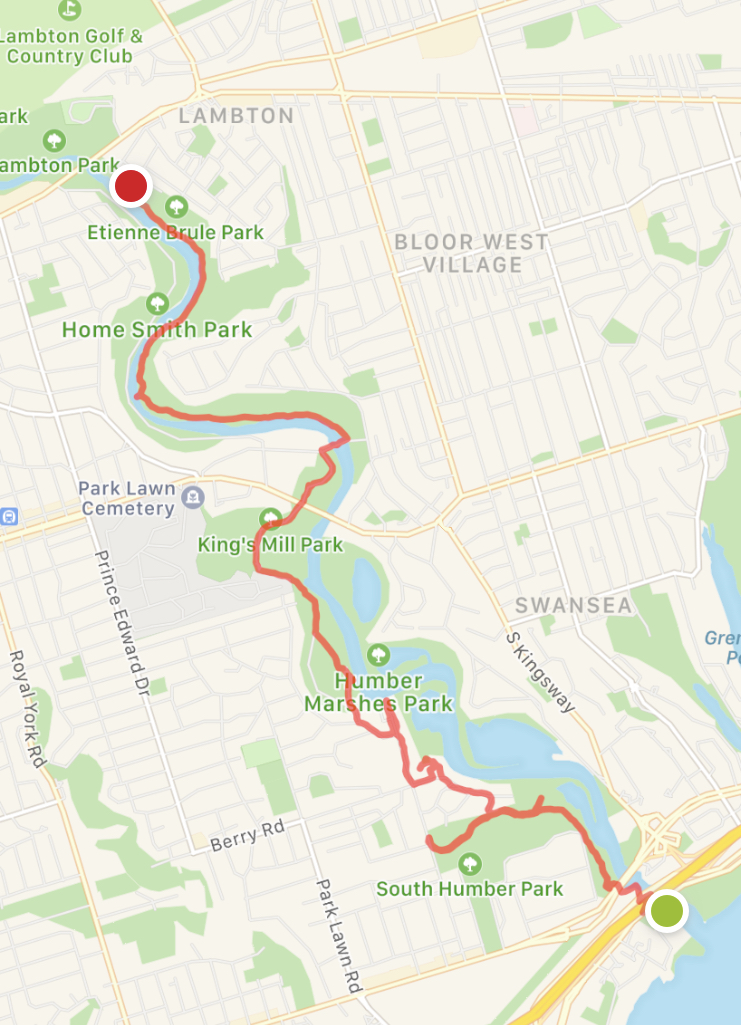 Even though I was on vacation, I decided to tackle this big walk on a recent gorgeous October afternoon. After docking my BikeShare vehicle just west of the Humber Bay Arch Bridge, I got on the trail and soon got swept up in nature. Longish detour notwithstanding, this was one of my favourite walks yet. It’s especially nice north of Bloor. So if you have less than an hour, get off at the Old Mill subway stop and enter the trail there. 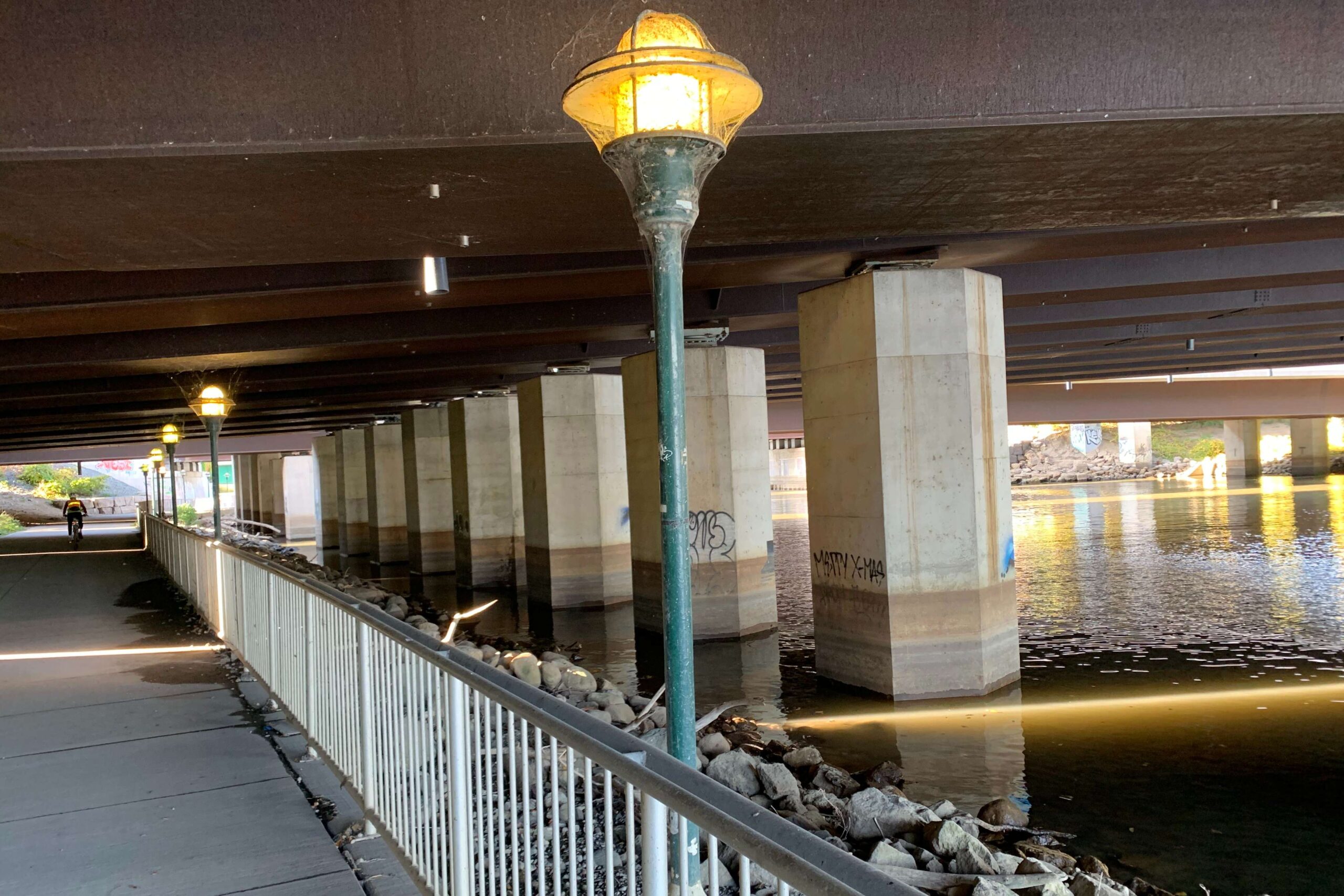 The journey up the Humber River includes passing beneath highways.

Of the dozen pandemic walks I’ve taken, this is one of the most wheelchair-friendly routes. Although some of the path is narrow, it’s paved concrete, and most hills are modest. Besides entering next to the Arch, you can access the route at South Humber Park, King’s Mills Park, which has a free parking lot and acts as a launch area for canoes and kayaks, Old Mill subway station and Étienne Brulé Park. 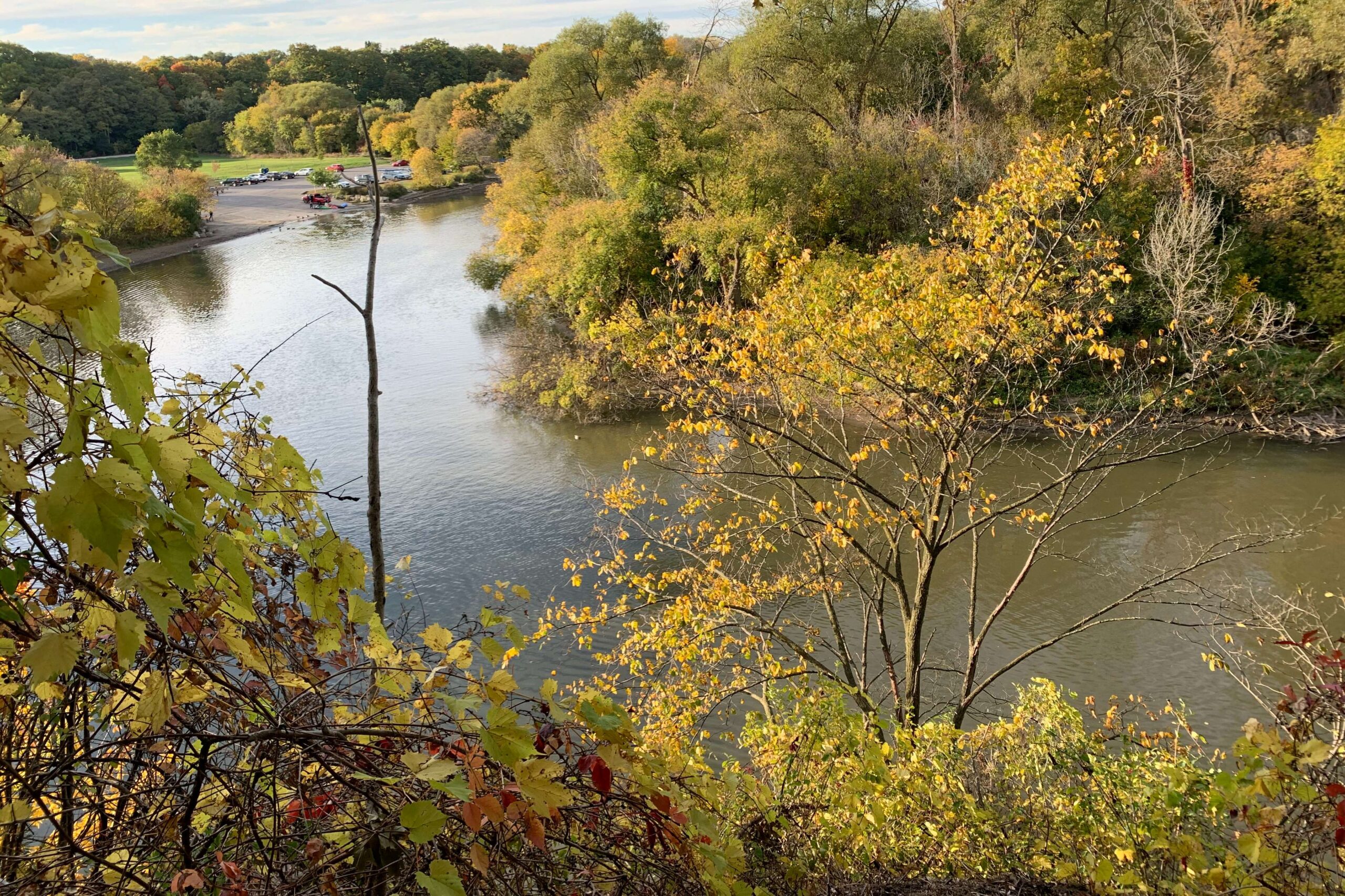 The Humber River is way more majestic than the Don.

This walk was a revelation. At times I felt like Dorothy or one of her friends setting off to see the wizard. One moment you’re walking beneath the traffic of Lakeshore. The next you’re immersed in a majestic forest. The next you’re staring at a little waterfall, hypnotized.

The Humber river itself is wider and way more interesting than its sibling waterway, the Don. And there are added sights like canoes, kayaks and people fishing. 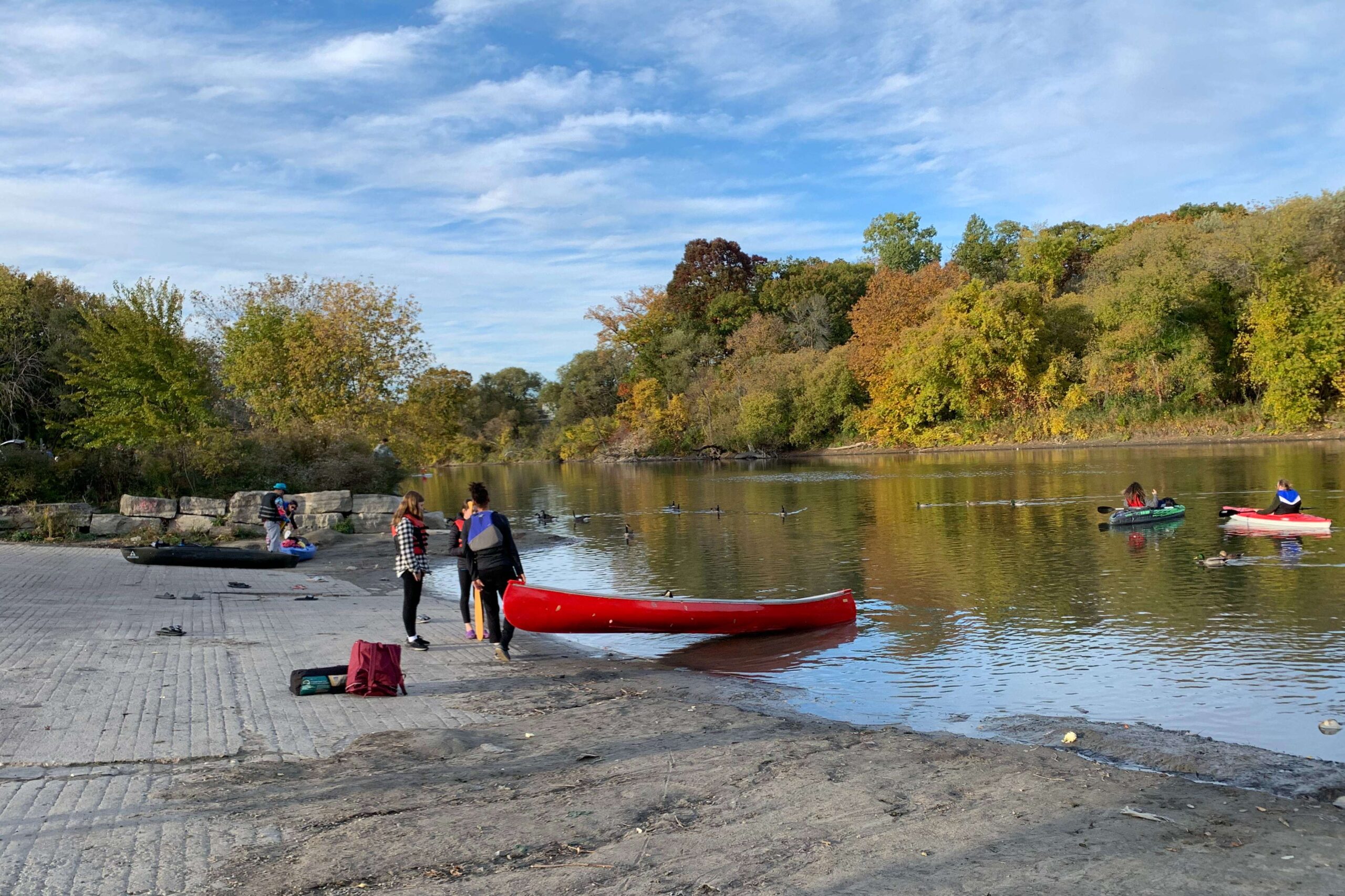 King’s Mills Park lets you enter the river via canoe or paddle.

One of the most exciting parts of the walk was witnessing salmon swimming upstream to spawn. Physically distanced crowds had gathered at the first little waterfall north of Étienne Brulé Park, and when a salmon made it, we all applauded.

Occasional plaques along the route chronicle the river’s history. One recounts Huron-Wendat villages centuries ago. Another marks the effects of 1954’s Hurricane Hazel, which caused the river to flood and resulted in 80 deaths. 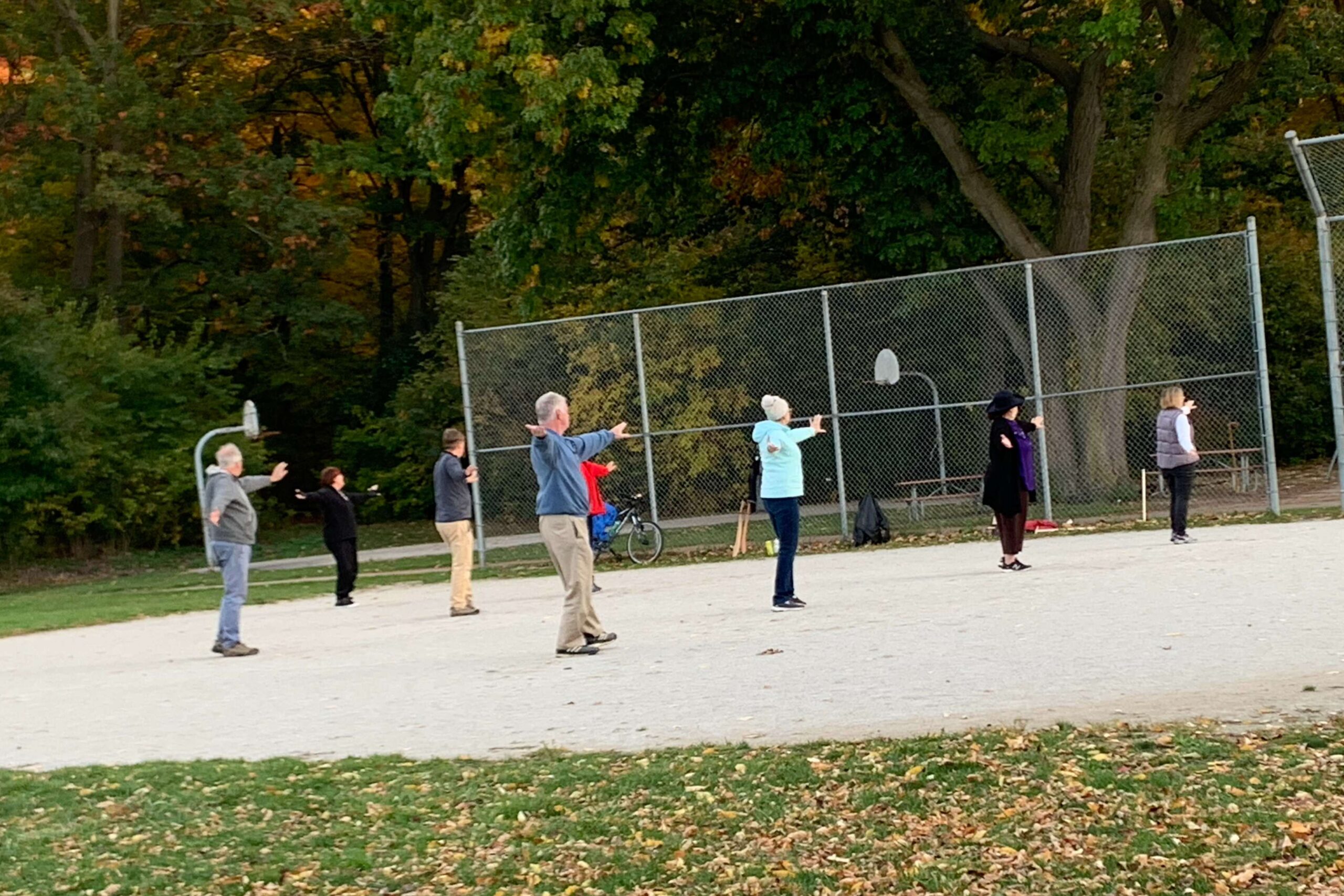 A bunch of people get their tai chi on.

What’s magical about the trail is how fully it’s used. North of Bloor, in a place called Magwood Park, I spotted some elderly people practicing tai chi. Very cool.

If you walk the Humber River, expect to share the path with lots of cyclists, many travelling faster than the 20 km/h limit. South of Bloor, there were a few pedestrians, including some families and dogwalkers (dogs are required to be leashed).

North of Bloor, although much more crowded, is easier because there’s a separate walking lane.

The only major drawback of this route is that north of the Humber Treatment Plant, the path ends, and I couldn’t see any signs telling me how to get back on. Once you join it again at King’s Mills Park, however, it’s easy to navigate. And if you have hours to spare, you can travel all the way north to Steeles.

Accessible, varied and not as crowded as I expected, the lower part of the Humber River provides one of the city’s best walks. It’s a history and geography lesson rolled up into one. I’ll definitely return, perhaps to continue northwards.