NOW MagazineLifeHealthToronto’s air quality has improved during the coronavirus pandemic

Toronto’s air quality has improved during the coronavirus pandemic

With millions of deaths worldwide due to pollution, it's time to stop normalizing the everyday impacts of poor air quality 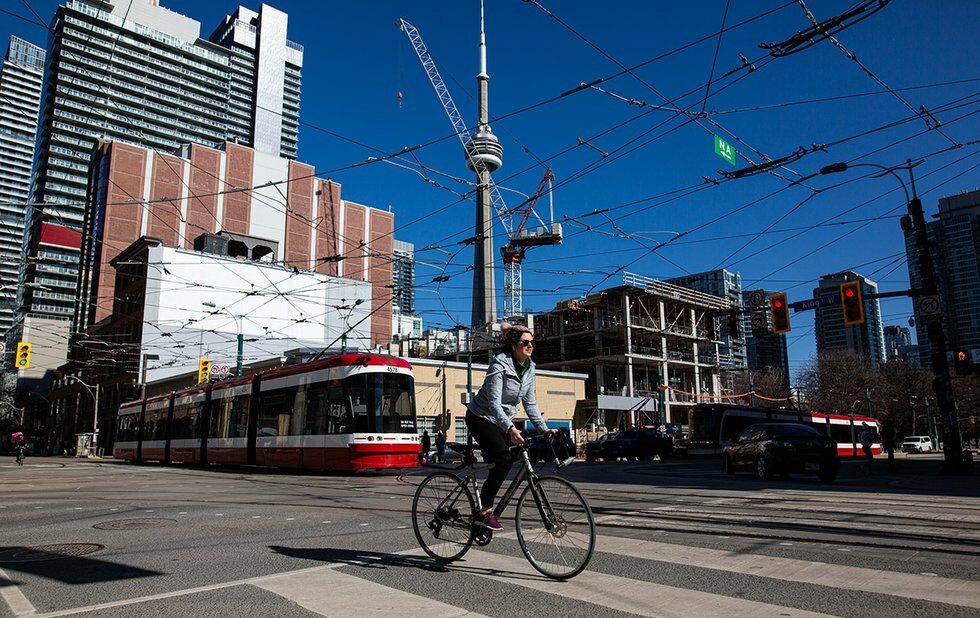 A cyclist rides through King and Spadina on April 2, 2020.

A week before the 50th anniversary of Earth Day and one month into lockdown, many in north India reported seeing the Himalayas from nearly 200 km away for the first time in decades. The Climate & Clean Air Coalition called it “a vision of hope.”

Clearer skies have been seen all across Europe and North America. In Toronto, air quality has improved dramatically. According to the Southern Ontario Centre for Atmospheric Aerosol Research (SOCAAR), which has been monitoring air pollution in the city, the concentrations of nitrogen oxides, black carbon and ultrafine particles – the three pollutants emitted by traffic – have decreased to almost half their concentrations prior to the shutdown.

That reduction corresponds to a decrease in traffic volume similar to what has been observed in Edmonton, Calgary and Vancouver as a result of the self-isolation measures imposed by the government due to the pandemic.

In fact, according to a recent University of Toronto analysis, cities that declared a state of emergency in February saw air pollution decrease by up to 40 per cent. The drop is attributed not only to less vehicular traffic but also factories temporarily closing.

It’s a little bit of a silver lining to the health crisis. Pollution irritates lungs and constricts the blood vessels, which makes people more vulnerable to heart attack, stroke or developing cardiovascular disease.

Every year, there are seven million deaths worldwide due to air pollution exposure, and 90 per cent of people are breathing air with high levels of pollutants, according to the World Health Organization. Those numbers have long been normalized.

Now, thanks to a drop in fossil fuel consumption and associated air pollution during lockdown, the Centre for Research on Energy and Clean Air is forecasting 11,000 fewer deaths in Europe, while China is predicted to see between 50,000 and 75,000 fewer deaths.

We also know that, during the 2003 SARS outbreak, patients living in regions with greater air pollution were more likely to die from the virus than those in regions with lower pollution. Wind also increased the virus’s propagation. And, according to a recent Harvard study, long-term exposure to poor air quality may increase vulnerability to COVID-19, with patients dying from the virus in parts of the U.S. with poorer air quality.

In other words, it’s time to stop normalizing the everyday impacts of air quality. And while a health crisis is anything but ideal, it has become an “opportunity” to understand how to sustain the positive changes, Greg Evans, a University of Toronto engineering professor and SOCAAR director, tells NOW.

“The changes will be different for different pollutants in different places,” he explains. “Capturing the change in air pollution during this shutdown will help us understand the many factors that influence air quality, which will help to further reduce its impacts once things return to normal. Fortunately, Canada in general has very good air quality, which may work to our advantage during this pandemic. The reduction in emissions due to the shutdown could further improve this advantage.”

Still, even as Toronto skies look bluer than ever, it’s important that we continue to do our part in limiting use of gas-powered cars, barbecues, leaf blowers and lawn mowers, according to SOCAAR. As air quality improves, disease transmission will go down.

Meanwhile, the better environmental and climate organizations are at being able to identify what is contributing to different pollutants, the more able the government will be at targeting them.

“Where we need to point the finger is at the province,” says SOCAAR team member and professor Miriam Diamond. “The city is the most responsive to issues regarding air pollution, climate change and quality of life. It’s so important that we have that conversation of how we press the restart button so there’s a lot of public investment going on.

“Doug Ford has even drunk the Keynesian Kool-Aid,” she adds. “But what Ford needs to do is to continue making evidence-based decisions. Now is the time to start thinking about getting a low-carbon economy moving and get the incredible co-benefit of lasting improvements in air quality.”

“This knowledge will help public health officials to identify and take appropriate actions,” adds Evans. “If we forward to the winding down of the current restriction, activity will increase and, along with it, the concentrations of air pollutants. But it doesn’t necessarily need to be this way. Any large investment of economic stimulus money can help Canada take a step forward rather than backwards. Canada can choose to use this stimulus money to preserve the environment, promote health and tackle climate change.”

That could look like more people working from home more often instead of commuting, or the country investing more strategically, for example, in public transit, electric cars or a modernized truck fleet with lower emissions.

“These could create wins for the economy, health and climate,” says Evans.

While it may be difficult to sustain these changes in the longer term, the hope is there thanks to the way the pandemic has shown just how much of an impact we have on our environment and how quickly things can change when the government and our community make a collective and active effort.