During the colder months, a trek through the 30 kilometres of underground walkway is a great way to see some sights – and fit in some exercise 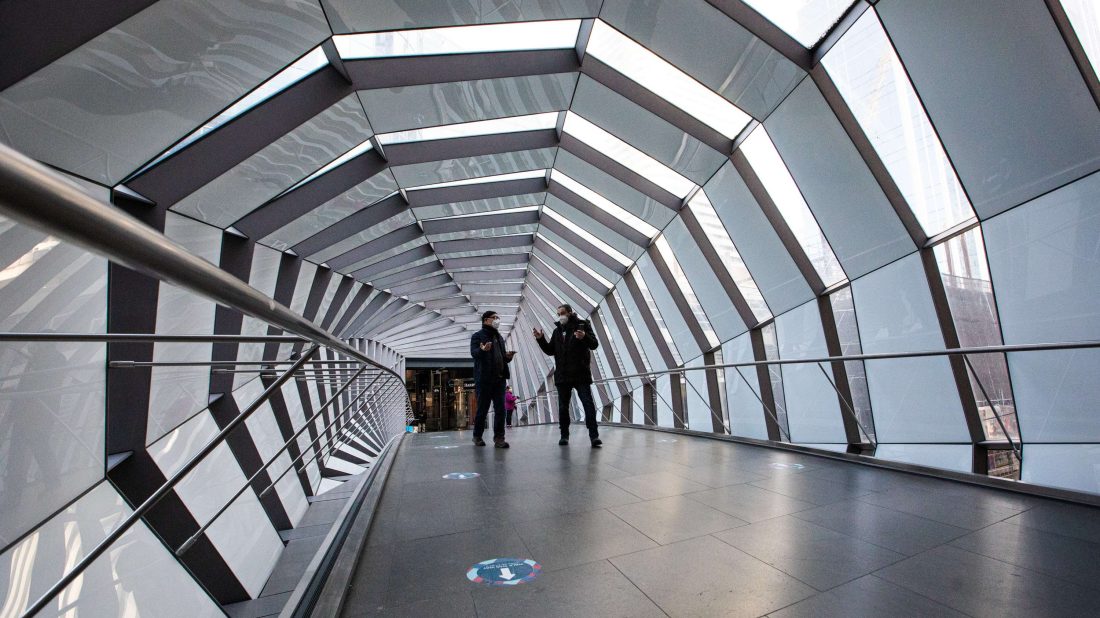 The new bridge connecting the Eaton Centre with the Bay makes you feel like you're in the opening credits of a Bond film.

After the latest round of provincial restrictions was announced this week, I went on Twitter to say that, with theatres closed, I would probably start up my pandemic walk series again – but this time with a twist.

Since I had already covered off so many walks myself, I was open to taking walks with others so they could show me their favourite parts of their city. Potential bonuses? Faced with the prospect of another long, isolated, pandemic winter, I would get to chat in-person with someone, I’d see some cool sights, learn a bit of history and we’d both get some steps in.

One of the first to respond was Nicolas Bello. We’d never met IRL before, but we’d started a DM thread after I’d written about the reopening of Ontario casinos. (Turns out he’s a video poker aficionado.) An avid cyclist, Bello – who was off this week because he just got married on New Year’s Day and is on a honeymoon staycation – suggested a walk that took in the Ghost Bike installations that memorialized fallen cyclists and emphasized the need for improved cycling conditions and infrastructure.

Since temperatures were plummeting, he offered to take me through Toronto’s PATH, the downtown pedestrian walkway. It turned out to be a good choice, because on the day we met – with photographer Nick Lachance in tow – it was -10 C outside.

A map of the extensive PATH system.

Bello’s idea was to start at the northernmost part of the PATH and travel down to the southernmost part, with a few detours along the way. (We both agreed that the PATH should extend further north to College Park.) As a lifelong Torontonian, I figured it would all be familiar to me.

After all, in the before times, I had memorized most of the circuitous system – which covers approximately 30 kilometres – in getting to theatres, restaurants and shopping, especially during the colder months. But it turns out there were a few corners I hadn’t explored. (Note: according to a security guard at the TD Centre, the PATH is open until about 1:20 am every day. But keep in mind that not all entrances will be open.)

Showing off the city

“Showing off the city is truly one of my great loves,” says Bello, who provides tech support for interactive display screens. (Throughout our walk he pays special attention to the video displays.)

He volunteers at many organizations, including the city’s Greeters Program, in which he takes strangers through neighbourhoods they’re curious about. Sometimes they ask Bello to take them on a favourite route, and one of them is often the PATH. He also volunteers at social service agency WoodGreen.org, helping teach English to new Canadians.

“That came from a sense of wanting to give back,” he says. “My parents didn’t speak much English when we came here from Chile in 1974 because of Pinochet’s military coup. My goal is to make life easier in Canada for new arrivals.”

As we go past the entrance to Dundas subway station and through the Eaton Centre, he rattles off some facts.

Did I know that a narrow portion of the Eaton Centre – just east of the Church of the Holy Trinity – has to be open to the public 24 hours a day because the original construction cut off a street? I did not. Did I know that several people have committed suicide jumping from the upper stairwells connecting to the parking garages? Wow, I did not know that sad fact. Did I know that the flock of geese near the south part of the mall are protected from adding anything to them? Yes, I knew that about Michael Snow’s iconic installation.

We stop to chat for a while in the bridge connecting the Eaton Centre with the Bay department store south of Queen. I hadn’t even realized that in 2017 it had been replaced by a twisty, torque’d new walkway, designed by WilkinsonEyre to make it look like you’re in the opening credits of a James Bond movie.

Our initial plan was to head west and go through the Sheraton Hotel to visit its indoor garden, but the connection was closed. So too was the connection going through the Bay Adelaide Centre. So we bundle up, head outside and trek down Yonge and enter the PATH at Scotia Plaza, where one of the first things we see is a lovely wall garden, which corporate concierge Neyba Costa explains just recently went up.

“The material the plants are attached to is biodegradable, and there’s water trickling behind it,” explains Costa. At night the lights go out, simulating a natural environment, creating a wholly sustainable system.

Overlooking the glorious lobby of the Royal York Hotel.

Continuing south, we take the cutoff (with very little signage) to visit the Fairmont Royal York Hotel. The underground shops are eerily empty, but once we ascend a staircase the massive lobby remains as spacious and elegant as ever. A magnificent bar has been added, rising from the ground like an art deco elevator. We walk up to the second floor to admire the view as well as the walls decorated with photographs of famous visitors. A picture of former U.S. president Barack Obama gets Bello to talk about his visit to DC for the historic inauguration day.

Rather than retrace our steps to the PATH to get to Union Station, we exit onto Front and enter through the ground-level entrance, noting that the free raised skating rink has already been taken down. One less activity available during the pandemic winter, we say to each other.

Once inside, we decide to check out the airy new bus depot at CIBC Square, which opened during the pandemic and now houses both GO buses and other companies like Megabus. (It’s a vast improvement over the ugly former bus depot at Bay and Dundas.)

Along the way, Bello shows me some cool additions, including a kiosk that, in 20 seconds, uses UV rays to disinfect your cellphone or watch. In a corner of WaterPark Place, meanwhile, is a machine that prints out random short stories for you to read, presumably on your bus or train trip; there are three options: stories you can read in one minute, three or five.

He tells me that the PATH takes you just north of the ferry terminal – another fact that’s new to me. We take the route, which involves finding a door off the main lobby of Scotiabank Arena, ascending stairs (it’s not accessible) and winding our way down to Queen’s Quay West. The passage is bright, contains several food options and pleasant seating areas and indeed ends at the southernmost tip of the PATH.

While I thought I knew the PATH, it was nice to discover a couple of new (to me) branches. A friend of Bello’s says there are plans to extend the PATH all the way east to the Loblaws at Jarvis and Queens Quay. We both agreed that signage could be improved throughout the system. Bello says he had heard that each letter in the acronym PATH signified a specific direction. Neither of us could find any proof of that.

As we fist-bump goodbye, I vow to investigate that in the next few months. I’ll have time; it’s going to be a long winter.

One response to “Toronto walk: exploring the underground PATH system”