The 2.5 kilometre stretch between Spadina and Sherbourne is as relaxing as bumper-to-bumper traffic on the 401 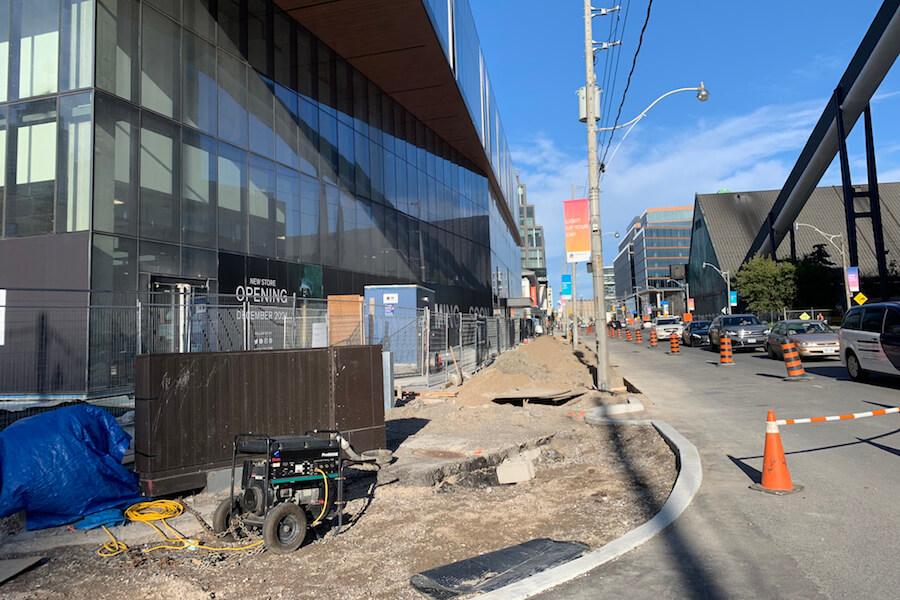 Construction, traffic and a limited view of the lake make this year's Waterfront Trail a nightmare.

The phrase “waterfront trail” summons up images of strolling along a beach, hearing the water gently lap the shore, experiencing a sort of Zen calm that comes from communing with the elements. This year’s Redpath Waterfront Trail, on until October 3, delivers none of that.

It’s a dangerous, concrete, car exhaust-clogged nightmare that’s about as relaxing as weekend bumper-to-bumper traffic on the 401.

After a stressful 18 months, the thought of taking a walk along Toronto’s Redpath Waterfront Trail – rebranded this year from the Redpath Waterfront Festival – sounded rejuvenating. It’s a 2.5 kilometre walk that goes from Lower Spadina to Lower Sherbourne.

The westernmost part of the trail sounded promising, providing a reunion of sorts: a meeting with the World’s Largest Rubber Duck, who originally appeared at Lake Ontario back in 2017 and was scheduled to make a return visit in 2020 but had to be put on hold because of the pandemic.

Waterfront walk isn’t all it’s quacked up to be.

This year’s duck appeared virtually as one of several Augmented Reality (AR) stops on the trail. Obviously you need a smart phone to capture the QR code. I guess it would be fun if you went with somebody. I went alone, and so posed my yellow friend with the CN Tower. Hardly an Instagrammable moment. The rest of the trail, as I soon discovered, wasn’t all it was quacked up to be on the website.

I quickly decided to hit the other AR stops, and whatever art stops I could fit in. I misread the PDF I downloaded for my phone and so missed a series of site-specific installations at 235 Queens Quay West. Some of them are collaborations with Luminato, however, so I expect they’ll be up for a while.

The next AR stop I hit was a grossly misleading display called A Water Walk: “Walk on water without getting wet!” I expected it would be near the shoreline, but in fact it was located where Toronto’s waterline used to be. Getting there was complicated. The traffic at York and Harbour is as busy as that at Yonge and Dundas; I guess that’s what happens when you’re near the Scotiabank Arena and ramps to the Gardiner Expressway.

The AR stop itself was underwhelming. After scanning the QR code you are instructed to hover around a picture of two wooden doors; the doors disappear to give you an archival photo of Toronto’s old shore. I have no idea how this connects to walking on water, unless it’s a joke about the fact that you’re now walking where there used to be water. Hilarious, right?

After this was a huge stretch along Queens Quay between Yonge and Jarvis where nothing was going on except construction. The blocks between Freeland (behind the LCBO) and Jarvis (the Superstore and Joe Fresh) are arguably the ugliest area in the city. On the north side you’ve got parking lots and condo construction (and beyond that the lovely view of the Gardiner); to the south you’ve got glassy condos and office buildings bunched together, as well as the massive, ugly Redpath Sugar Plant. Until you get to Sugar Beach, you wouldn’t even know you’re near the water. It’s here that I saw a street banner boasting: “Waterfront BIA: More Than Water.” What is that “more”? Concrete? Condos? Construction?

You’ll feel as out of place as this augmented reality whale.

The third AR spot was the coolest: it let you see whales – modelled after those on the Redpath building – swimming all around you. Except I doubt these whales would survive long out of water and choking on the fumes of cars.

The final spot I visited was something called Light Showers, at 214 Queens Quay East, at Sherbourne Common Park. Since it was just after 5 pm, the sculptures in the water purification system weren’t lit up. I didn’t cross Queens Quay to visit the other part of the Common, which includes a waterside park and a seasonal skating rink. But the vibe I got from this fake bit of man-made art and nature – surrounded on one side by fast food restaurants, and on another by the traffic from Lakeshore and the Gardiner – made me want to flee.

Perhaps one day I’ll visit the Water’s Edge Promenade and Merchants’ Wharf. One of the AR spots I missed was located near Merchants’ Wharf and shows what the area will look like in the future. I sure hope it’s better than its current state.

One response to “Toronto walk: Redpath Waterfront Trail is a disaster”