What’s with the lack of public toilets in Toronto? It’s about shame

Public washrooms should be everywhere like benches and playgrounds, but talking about them still makes people uncomfortable 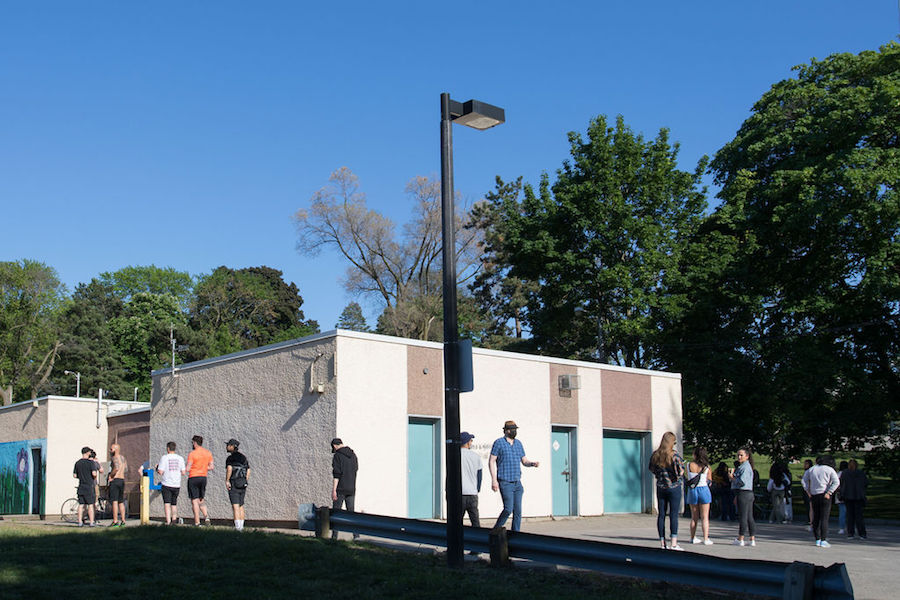 A line-up for the public washroom in Riverdale Park last week.

The weather is nicer, the stay-at-home order has lifted, and the city’s green space awaits. We can all be outside for as long as we like. But as people pack Toronto parks, another issue arises: some of us are going to need the public toilets. Most of us, in fact.

The pandemic has changed a lot of things, and access to public washrooms is one of them. The issue doesn’t get as much attention as Ontario’s chaotic vaccine rollout or Toronto’s weekly anti-mask marches, true, but it’s getting some traction, even reaching the pages of UK newspaper The Guardian last month.

A petition is currently circulating to encourage Toronto city council to vote in favour of a motion to add more public washroom facilities in the city’s parks.

And they’re badly needed. If you’ve gone out into the world, you’ve probably noticed most businesses closed their customer washrooms out of an excess of caution, and many public buildings that might have provided easy relief are still closed to the public.

“A lot of people had this network that they relied on that they could no longer rely on,” says Halifax journalist Lezlie Lowe in the latest episode of the NOW What podcast. “I hoped that that would be this moment in the cultural zeitgeist where people who had it pretty good would say, ‘Oh, my gosh, this is really not okay.’ And this is what many people are experiencing.”

The rise of encampments of unhoused people in public parks has created an additional demand for facilities, which Toronto has tried to address with portable washrooms and handwashing stations. But temporary relief is only temporary.

Lowe, author of the book No Place To Go: How Public Toilets Fail Our Private Needs, was advocating for washroom access as a component of city planning long before COVID arrived – arguing that purpose-built public washrooms make it easier for people to plan days out, turning neighbourhoods into destinations.

“It’s not only about people who are experiencing homelessness,” she says. “It’s about everybody, and everybody’s use of the city. It’s about equity… public bathrooms should be these amazing spaces that are in the middle of our cities that we love, like playgrounds and park benches.”

So why hasn’t that happened?

“It’s about shame,” she says. “It’s about this idea of the bathroom as this this place where we do private things and so therefore we don’t talk about it. There’s a whole bunch of other things that are tied into it around gender, and any other kind of difference other than white cis maleness. It makes some people uncomfortable to talk about it.”

Toronto has been working to provide emergency relief in public parks over the course of the pandemic, though it’s currently a short-term strategy.

“A contract for portables was secured in the in the early weeks of the pandemic, and it was secured for washrooms and sinks, because it was recognized that people do need access to facilities where they can wash their hands. [And] what staff were able to do… was move them around as locations of encampments change to support that need. But those are actually separate from the portables that are at places like Trinity Bellwoods or High Park; those are different kinds of toilets with hand-washing sinks.”

“It’s difficult to predict how long the portable washrooms that service those encampment locations will be required, but we are definitely looking at improving washroom access generally,” Arbour says. “We have a team that does capital construction in parks, and they are looking at a longer-term strategy to improve washroom access, in particular through the winter.”

Ultimately, Lowe thinks the only way to make real progress on the issue is to treat public washrooms as infrastructure.

“It’s like a bike lane,” she says. “You can paint lines [on the road], that’s a really cheap fix for a bike lane. But any cyclist understands that’s not actually doing the trick. Just like a porta-potty is really not going to do the trick. We need actual infrastructure in our cities. Cities are pressed upon by this idea of austerity; that’s kind of one angle of it. But I also feel like cities don’t want to spend money on bathrooms because there are so many voices that don’t value those bathrooms, have never felt the need for them in the way that people who do feel that need understand it.”