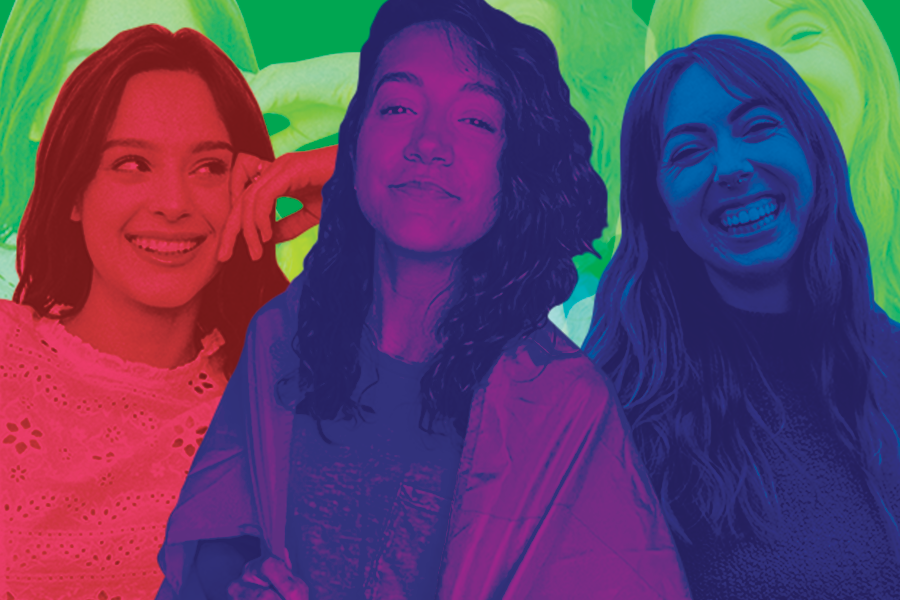 When the pandemic started, Emma Stern found herself scrolling TikTok more and more, and was confused by all the gay content.

“I remember looking at my roommate, who is straight and being like, ‘Isn’t it so weird how many lesbians are on TikTok?’ And she was like, ‘No, what do you mean?'” they recall.

Pre-quarantine, Stern, who uses she and they pronouns, says she was going on first dates with men almost every week and just didn’t understand why she hated all of them. But during quarantine, she wasn’t dating anymore. Dating, it turned out, was a distraction.

“I was unemployed, no school, I had no friends, and I had a lot of time to think,” she says. “I literally sat down and wrote down in a notebook all of the girls I thought I had crushes on throughout my whole life and I came up with this list of 30 girls and reasons why I thought I had a crush on them.”

The COVID-19 pandemic has resulted in extreme isolation and limited social contact for many, and the impact has been felt more deeply among some communities.

A June report from Egale Canada on the impact of COVID-19 on LGBTQI2S people found that 47 per cent reported a significant negative mental health effects from the pandemic, 21 per cent higher than the national average of 26 per cent.

But isolation and, for some, more free time has also given some Canadians the space to reflect on their gender identity and sexuality. Coming to terms with identity and coming out to yourself or others is a unique process for each person, but doing so during a pandemic comes with its own set of challenges.

Isolation, quarantine a chance for reflection on identity

Alayna Joy, a YouTuber based in Canada, says having to quarantine during the pandemic led to realizations about her sexuality. Joy had identified as bisexual for years and was in a long-term relationship with a man, her fiancé at the time. They were in what she describes as an open relationship, because they had agreed she should be able to explore queer relationships even while they were together.

Joy says that within the past year, the queer “side” of her life had become really important. She was exploring flirting with, dating and developing relationships with women – but when the pandemic hit, Joy had to isolate with her partner.

“I had all of this extra time, and usually when I would start having these questions or these panics about being gay, I would rationalize it away and I would be able to talk myself out of it or I would be able to run off to my queer community,” Joy says. “Once I was in quarantine, I was just stuck in my own head with my own thoughts and I had to face it.”

Joy realized that she had been rationalizing away the fact that her experiences with women and non-binary people felt inherently different from her experiences with men. She did love and care for her partner, but after some reflection, she says, she had to accept it within herself that she was gay, not bisexual.

Sarah Miller is a psychotherapist who often works with clients around issues of sex and sexuality, and she says it’s likely the pandemic has prompted people to really think about what is important to them.

For Stern, that exploration came through her TikTok account, @udidthisforwhy, which grew in popularity after she started posting content about coming to terms with her sexuality and later, gender.

“I started to notice more and more people that I followed were starting to use different pronouns or kind of more openly talk about different pronouns,” she says. “And a few people had given me different things I could read, particularly about pronouns that are combined like she/they.”

Stern started using she/they pronouns after reflecting further on their gender identity. “I realized more and more that I didn’t inherently relate to being a woman,” they say.

Without social connection, queer people have turned to online communities

Arianne Persaud is a Toronto writer and filmmaker who had a similar experience to Stern when they came out as non-binary in June in the middle of the pandemic. They say that being isolated with their partner helped them figure out their gender identity.

“Being around people and getting feedback sometimes can reinforce the gender binary and gender roles and expectations,” they explain.

Persaud has been relying on the online non-binary community for advice and positivity during this period of isolation.

“Being away from people physically, I lost this connection to a group community that I only was able to access going out,” they say. “Needing social media in a way to be able to connect with those people is interesting.”

McGeough notes that for queer people, social connectedness to a supportive community is really important.

“Social support around one’s sexual orientation or gender identity is a really big predictor of mental health for this community. So when folks are accessing support services and a supportive community, we see a reduction in things like depression, anxiety, suicidality,” she says.

Turning to online communities is a common response for newly queer people attempting to learn more about their identity.

Like Stern, Ellyce Fulmore, a career and money coach in British Columbia, found support through the queer TikTok community when she started thinking more about her sexuality at the beginning of the pandemic.

“I feel like TikTok made me really just more open to it, because there was this huge community of people that were like, this is okay, this is what it looks like to be in our relationship and things like that,” she says. “So it just gave me the confidence and made me feel more comfortable to actually explore that side of me and learn more about it.”

Fulmore says the more queer content she saw on her TikTok account, the more she was prompted to really consider her attraction to women.

“I was really struggling throughout quarantine, being alone, having a lot of time to think and to journal and just really realizing I’m much more attracted to women than I thought it was, and this is a real thing,” she says.

She ended up breaking up with her boyfriend and trying out Tinder, and is now in a relationship with one of the first girls she matched with that day. Fulmore says she’s sure that she would have realized this about herself eventually, but without the pandemic, it might have taken much longer.

“Who knows, maybe I would have ended up marrying a man and not realizing for a really long time,” she says.

Alayna Joy feels a similar way about her relationship with her ex-partner, especially because she was on the path to getting married.

“I think without quarantine, [the realization] wouldn’t have happened,” she says. “I was really struggling with the idea of getting married, and I couldn’t put my finger on why. I would try to explain it to my partner and the thing I kept saying was, I feel like I’m saying goodbye to a piece of my queer identity. And I know that that wouldn’t be true for a bi woman. It’s a major red flag now.”

Yearning for the post-pandemic life

While it’s been amazing to learn from others and build a community online, Stern finds it tough coming to this realization when opportunities for exploration are so limited.

“I know that everyone in the world wants to just go have fun and be carefree again, but I feel like particularly for people come out during the pandemic, there’s this feeling of, ‘I want to experience what you guys have experienced,'” she says. “And I don’t want to be a baby gay anymore, but I can’t really escape that until the world catches up.”

Persaud says that, for them, it’s more terrifying to think about post-pandemic life.

“I’m not looking forward to having to constantly flag my difference. Before even identifying myself as non-binary I had people come into where I worked, and people would just be like, So are you a boy or girl?'” they say. “I imagine a lot more things like that are going to happen.”

And while many people are able to celebrate their coming out, it’s important to remember that others are not able to depending on their living situation. COVID-19 has forced many young people to move back home with their families.

“There are so many people who don’t feel safe or ready to come out,” Miller says. “I think it might be painful to see other people coming out and not seeing their story reflected.”