NOW MagazineLifeWhat to do for a getaway to Kitchener-Waterloo

What to do for a getaway to Kitchener-Waterloo 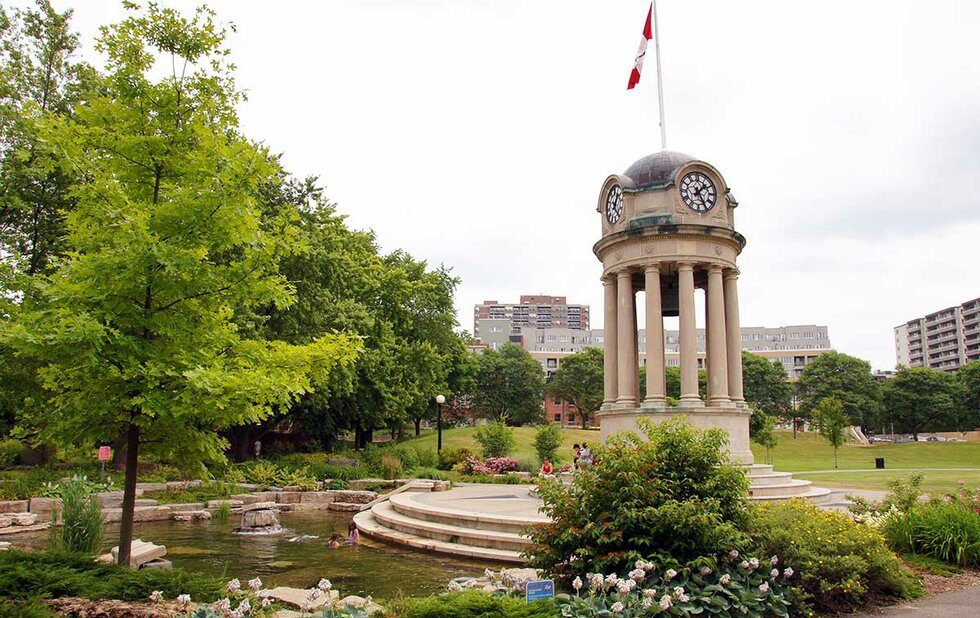 Aside from partying at Oktoberfest, there used to be very little reason for Torontonians to make the hour-long drive to Kitchener-Waterloo. But the neighbouring cities, which along with Cambridge make up the Tri-Cities, has been changing thanks to the tech boom. Companies like Shopify have moved in recently, and young folks are relocating to the area and opening cafes, bars, galleries and shops. Combined with its rich history and surrounding green spaces, K-W is an idyllic getaway for offbeat fun.

Here’s a guide to a weekend getaway in Kitchener-Waterloo. 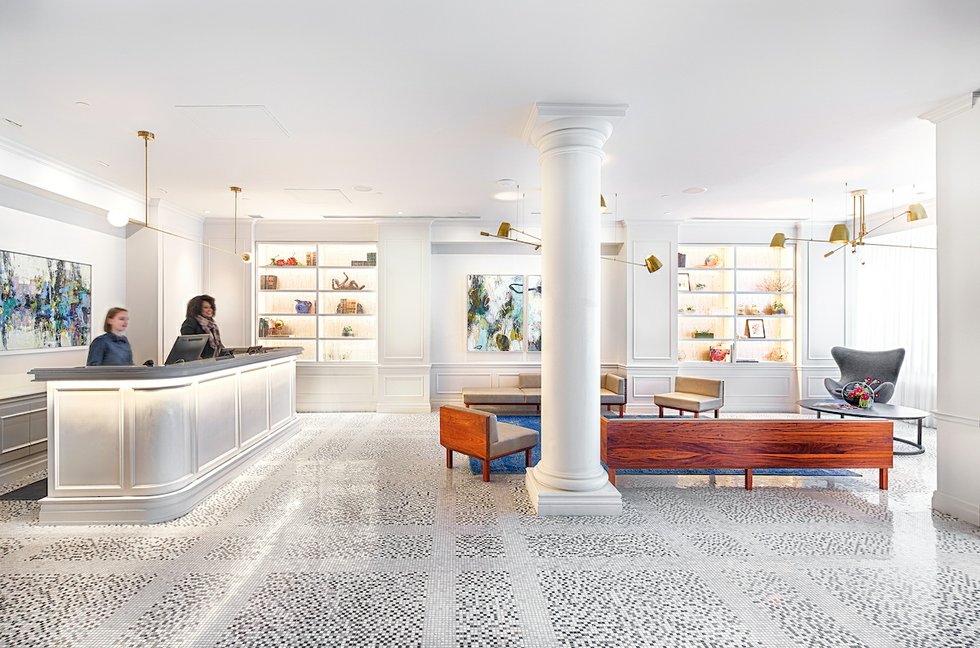 The lobby of the Walper Hotel in Kitchener after renovations were completed in 2016.

There are several chain hotels in K-W, but they don’t offer the intimacy of the Walper Hotel, a historic boutique hotel located on Kitchener’s downtown strip. The hotel opened in 1893 and underwent a complete renovation in 2016, where 92 guest rooms were updated, a bar and lounge were added to the second floor and the entrance and lobby were relocated. Some things remain the same including the wood floors in the hotel’s Crystal Ballroom and a small balcony where jazz legend Louis Armstrong once stepped on to and played his trumpet. Hotel guests enjoy Skoah products and Smile Tiger coffee in their room as well as free access to Queen Street Yoga next door.

Where to eat and drink: 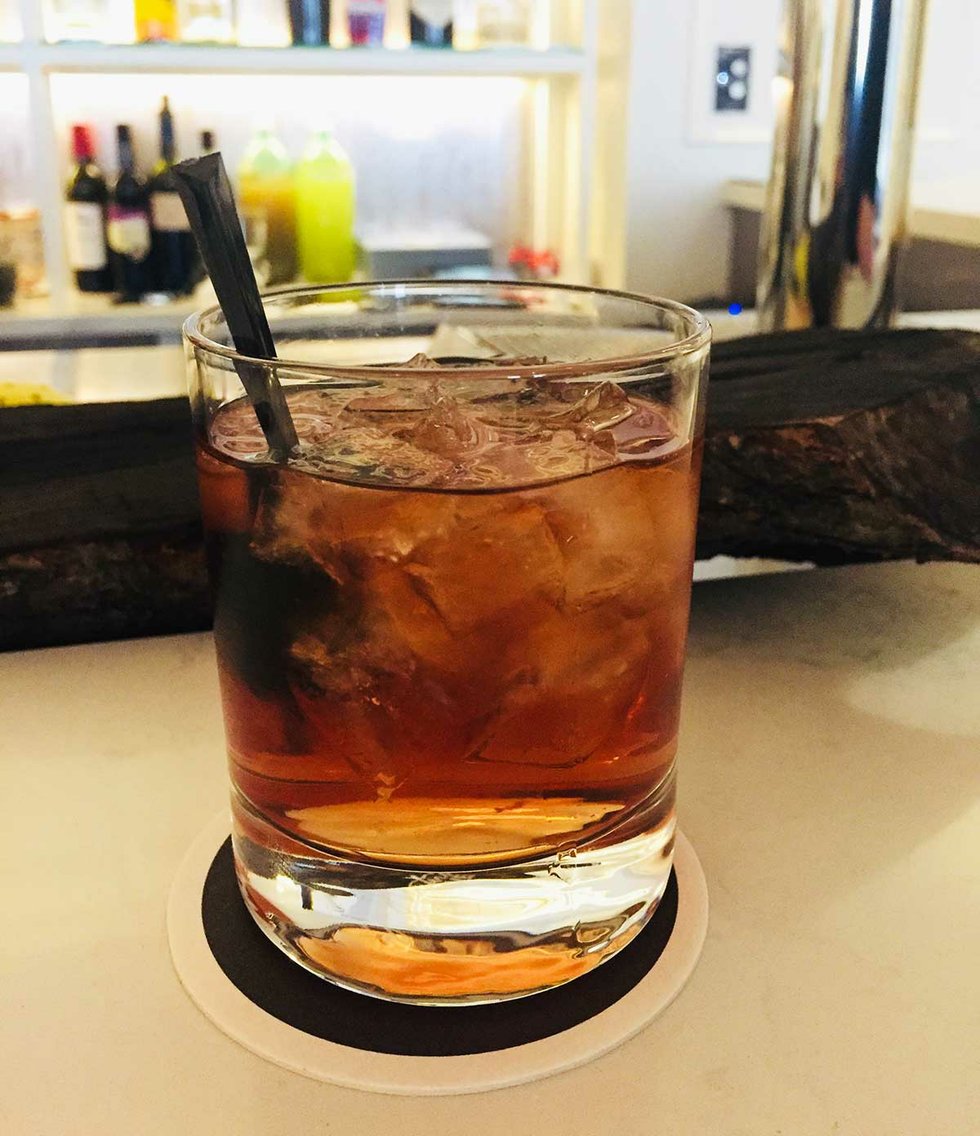 Sip on the award-winning Knock On Wood cocktail at the Lokal bar.

There are a number of bars and restaurants to grab a drink, but you may as well start at the Lokal on the second floor of the Walper. Here the focus is on cocktails, although wine, beer and non-alcoholic sodas that are fermented in-house are also available. Among the tasty cocktails that lead bartender Melissa Baumunk has created is the Knock On Wood, a smoky sipper that utilizes gin from Willibald Farm Distillery in nearby Ayr.

Cocktails are also available at TWH Social, a restaurant and bar below the Walper popular for dinner and weekend brunch. Executive chef Jeff Ward’s large menu includes pub favourites like burgers and cobb salad or shareable Italian plates such as tomato and goat cheese bruschetta. There’s also plenty of seafood options – a Mediterranean-style grilled octopus, shrimp linguine and catch of the day from local Caudle’s Catch Seafood are all on offer.

For nightlife that goes beyond Irish pubs and dive bars, hop in a cab to downtown Waterloo, where the bar district spans several blocks. Among the livelier bars is Becky’s Apartment, which takes its inspiration from your most basic girlfriend’s college pad – mismatched furniture and drink specials included.

Down the block is Jane Bond, a retro bar with an all-vegetarian menu and live music several nights a week. White Rabbit serves up elevated pub grub like deviled eggs and mac and cheese with its drinks, while Loloan Lobby Bar (the latest from the owners of Bhimas Warung restaurant) pairs Asian fusion with tiki-inspired cocktails. 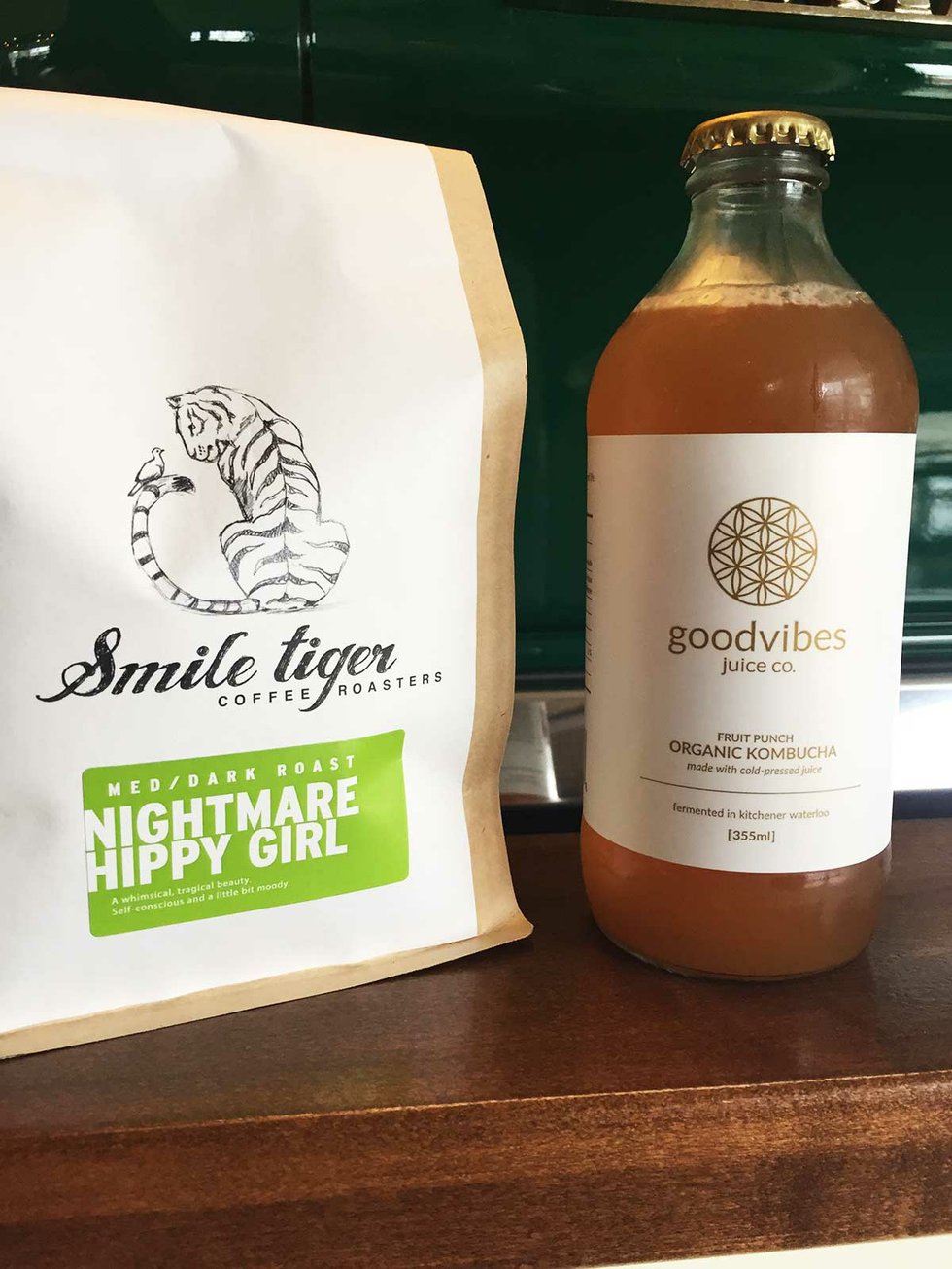 Swing by Smile Tiger for coffee and Goodvibes Juice for kombucha.

During the day, fuel up at Smile Tiger, a small-batch coffee roaster near the train station in Kitchener, or swing by its sister shop Death Valley’s Little Brother, which offers coffee, whisky and baked goods in Waterloo. For the health conscious, Goodvibes Juice Co., is a one-stop shop for cold-pressed juice, nut milks and kombucha.

A trip to K-W might not be complete without a stop at one of the local breweries: Abe Erb, Block Three and Grand River are all popular choices. The newest to pop up is Descendants Beer in Kitchener, a 5,000 square-foot facility that opened in 2016. Tours are offered on the Saturdays only, but the beer hall, which serves a full dining menu, and bottle shop are open daily. 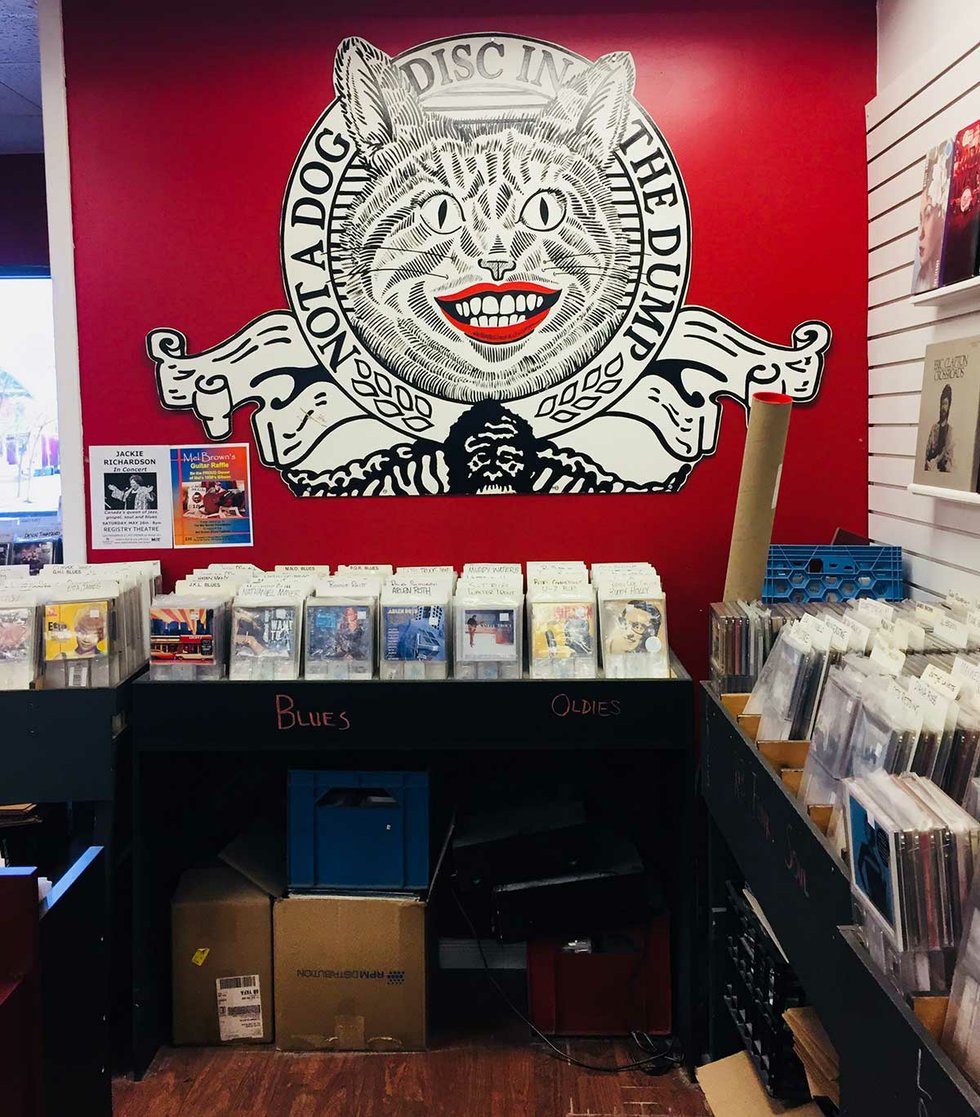 Like every small city, there are a number of shopping gems in K-W, from vintage shops to record stores, indie book shops and eccentric experiences. Start at Encore Records, which has been located in downtown Kitchener since 1981. Just down the street is White Tiger Vintage, a clothing boutique with everything from broken in Levi’s and leather jackets, to deadstock sunglasses and 1950s dresses.

Next to Kitchener city hall is Open Sesame, a three-year old gift shop and arts hub. It’s a great place to check out locally made zines and cards, find cool housewares like tea towels from Vancouver’s Forest and Waves, and pick up a cheeky enamel pin as souvenir from Kitchener’s Bearface by BRFC designs. Open Sesame also regularly holds events including art exhibits, book readings and concerts. 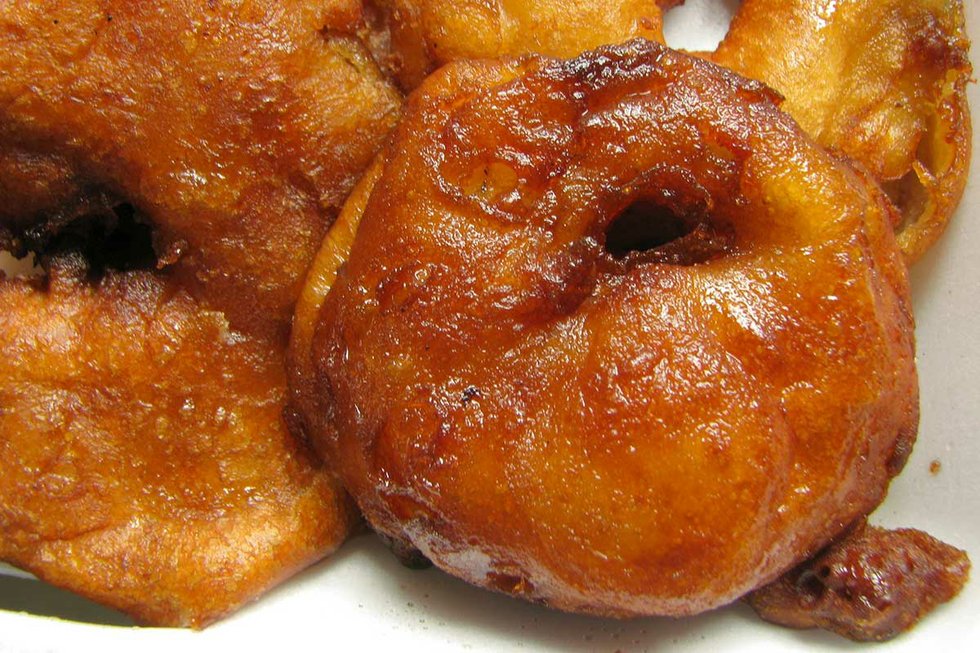 Fresh apple fritters are a hit at both the Kitchener Market and St. Jacobs Farmers’ Market on weekends.

On Saturdays, there are two major farmers’ markets to choose from: St. Jacobs Farmers’ Market north of Waterloo and the Kitchener Market downtown. During my visit, I checked out the Kitchener Market, which includes a food hall and marketplace on the upper level of the market, as well as an expansive farmers’ market selling fresh local produce on the lower level. Find everything from fresh flowers and fruits, to homemade pies, apple cider, pickles, cheese and bread. Be sure to buy a dozen apple fritters before you leave for the car ride home – they’re a regional specialty.

Kitchener is home to over 200 parks, and Victoria Park downtown is the city’s crown jewel. Open since 1896, the park includes a manmade lake, picturesque bridges and a clock tower near the entrance. Victoria Park connects to the Iron Horse Trail, an easy 5.5 kilometre hike that provides a scenic corridor from Kitchener to Waterloo. It’s one of several hiking trails around K-W that are open year-round. 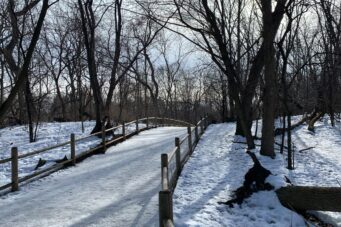