"When I started transitioning, I became determined to be the best version of myself and my confidence started to change." 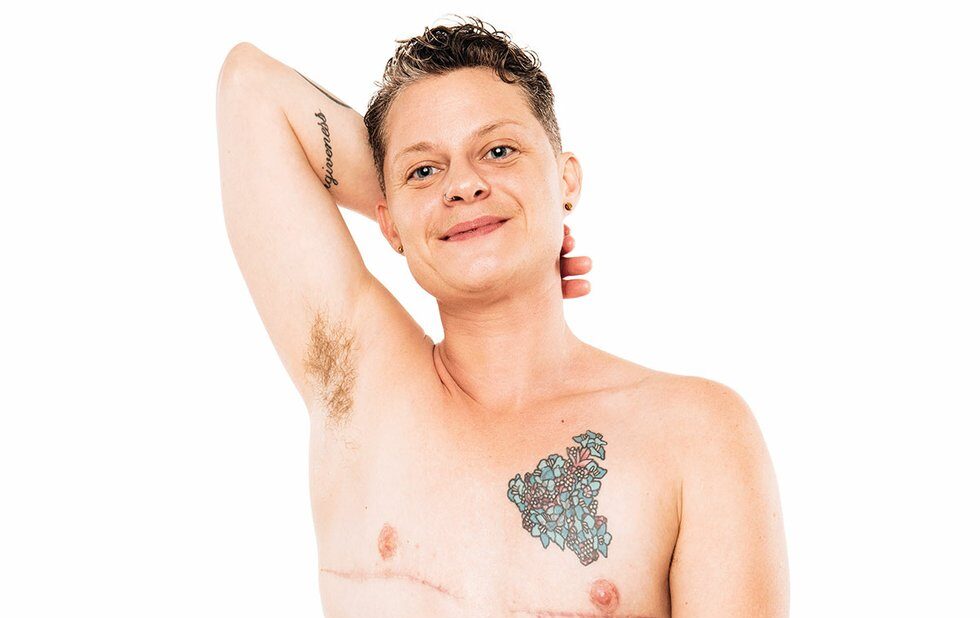 Ever since I started developing as a kid, I had self-esteem issues. I only wore boys’ clothes when I was little. I would swim with shorts on and no shirt, and I felt confident going into the pool. But when I started to grow breasts and got my period at age 10, I finally had to go out and get a full bathing suit. After that, I never wanted to swim again.

I was still active as I got older, but I worked out more obsessively as the years went on because I wanted a more masculine-presenting body.

I made the decision to transition late in life. I’d thought about it for about seven years, but I had a partner tell me they were not interested in me transitioning, so I decided not to. When we broke up, it lit the fire under me to start as soon as possible. I met my current partner after that, and she was so supportive of my decision. I brought it to her attention within the first couple of months, so she doesn’t know me any other way.

Once I started testosterone, right away I felt so much better about myself. Within this past year, I started seeing my body change and noticing how exercise was changing my muscle groups.

I’ve always been really into exercise and sports – transition hasn’t changed that. But I had played in a rec basketball league for years, and even though it was co-ed, you had to be either a girl or a boy. When I started testosterone, I didn’t feel like either. Eventually I quit. I might try to get into a queer league – I’d like to see more spaces like that in the city.

When I started transitioning, I became determined to be the best version of myself. My confidence started to change – not only within myself, but in terms of my job and my goals.

I had been getting barber cuts since I was in my early 20s. I often went to multiple barbers because it was hard to find a comfortable atmosphere. Sometimes I would go to a hair salon, ask for a men’s haircut and then be charged three times as much at the end because they saw me as female.

When I discovered the world of barber videos on Instagram, that was it. I quit my advertising job the next day, did some apprenticeships and worked at a salon for two years. While I was there, I started to reach out to the LGBT community specifically: “Come see me for your cuts because I’m not going to gender you.” I would charge everyone the exact same price.

I was getting booked up weeks in advance so I decided to open my own barber shop. Now I would say a quarter of my clients are cis men, a quarter are kids and the rest are the queer community as a whole. Everybody’s welcome here.

I had top surgery a few months ago and that was it for me – I was like, “I will go out into the streets naked! I don’t even care! I wanna scream it from the roof!” I couldn’t wait for my bandages to come off. It was euphoric for me to be able to take off my shirt and feel comfortable. I don’t care about the scars – they’re a part of who I always wanted to be.

A few years ago, I spent my 31st birthday in CAMH because I was suicidal, unstable and wasn’t happy with myself. I felt terrible for a really long time. But if I was in that place and can get to where I am today, anybody can, as long as they put in the work. I’m still in therapy. I continue to work on my mental health, but now I can say, very confidently, that I love myself.