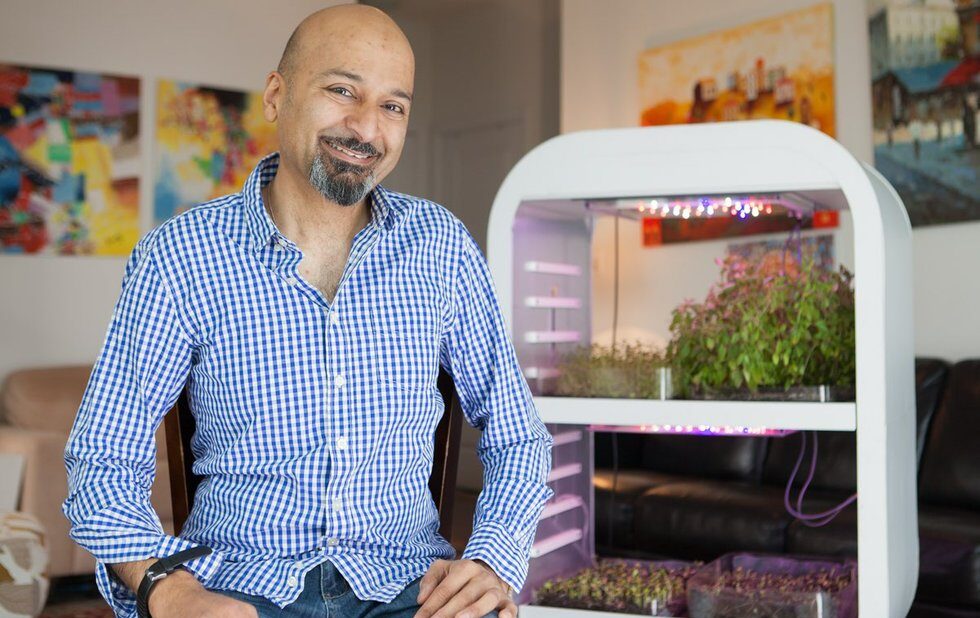 One of the joys of summer is stepping out into the backyard or balcony and snipping a few leaves of fresh herbs or greens and adding them to dinner. Then winter comes and destroys all of the plant-growing fun.

But if one local entrepreneur has his way, city-dwellers will be growing healthy food year-round in their homes.

Aamar Khwaja is the founder of Modgarden, a modular indoor farming system, and his mission is to enable people to produce enough food to yield a salad a day.

Modgarden was born out of Khwaja’s own personal need. After decades on Wall Street, he was chronically sick. When changing his diet resulted in improved health, he decided to grow his own food, which seemed impossible in his Toronto home.

“The food system is broken,” says Khwaja. “Any food can be labelled natural but still be sprayed with pesticides. I wanted to change that. After staring at a wall in my kitchen I thought, ‘Wouldn’t it be great to grow something there?’”

He began researching urban farming and vertical gardening and struck upon the idea of creating his own system, which uses mineral-rich living soil and is app-enabled.

Khwaja enlisted Toronto-based sustainable architect Heather Dubbeldam, whose firm is designing a rooftop farm for a client that includes an orchard.

The tinyFarm is smooth and sleek, more like a fetching piece of furniture than a productive garden. With three sizes, ranging from desktop to floor model, all of which are stackable, it has flexibility to fit small spaces. He already has a great deal of interest and expects the units to be on the market in mid-2018. Prices range from $799 to $1,199 (though pre-launch online discounts are $450-$750).

Modgarden is part of a growing movement catering to indoor food production, one driven by health consciousness and sustainability.

Food-oriented products already on the market are typically hydroponic and range from small objects to large, custom builds. For smaller spaces, there are systems like Click & Grow, which comes in three tabletop sizes with stylish light arms, as well as two wall farm units. Miracle-Gro offers a system called Aerogarden.

The Urban Cultivator is akin to a wine fridge and installed under a counter in place of cabinets. Even IKEA has an indoor gardening system, Krydda/Växer, though it’s not yet available in Canada.

Then there are aquaponics systems, like HiGarden or Grove, which incorporate fish and wetlands to make self-sustaining, closed ecosystems. Water from the fish tank is fed up to the plants and then filters from the plants through a wetland layer for purification before returning to the tank.

At a glance, these devices appear complicated. But as Leon Wasser, VP of business development for Toronto-based HiGarden, says, “All you need to add is air and fish food.”

HiGarden’s VIGA systems range from a mini tabletop and 12- and 24-inch desktop models, to those designed for building lobbies and indoor community farms. (Prices for consumer models run from $499 to $1,119.)

HiGarden founder, Phil Fung, is a leading LEED (Leadership in Energy and Environmental Design) advisor, so his approach includes improving the sustainability of buildings. 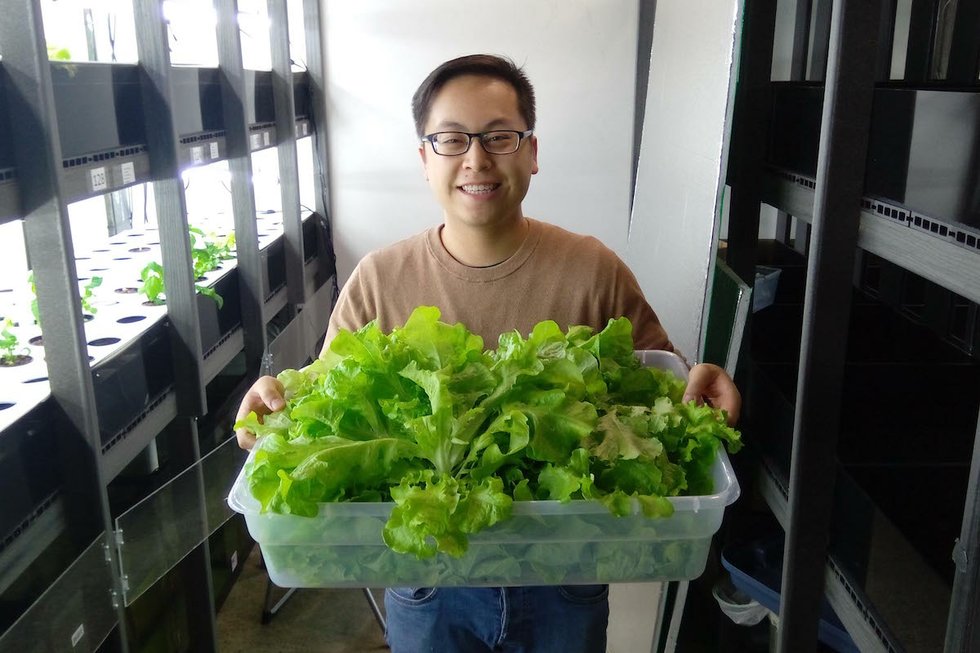 While HiGarden’s ambitions include working with schools, long-term-care facilities and northern Canadian food deserts, the company is also conscious of growing consumer demand.

“Younger people in condos don’t have easy access to green space,” says Wasser. “This is something that could be transformative – bringing a [garden] oasis into your home can be really beneficial, health-wise.”

Of course, when people think of growing herbs indoors, a different variety comes to mind.

With federal legislation legalizing marijuana, including growing at home, coming in July 2018, that other herb is on the radars of Modgarden and HiGarden.

HiGarden has already designed a four-pot prototype of the VIGA in anticipation of the four-plant growing limit the law will allow, but beyond that, no modifications have been made, largely because weed is still illegal.

The challenge with retrofitting existing units is that while you don’t need to lock up basil, you’ll want to keep cannabis away from kids. Security and sufficient airflow – not to mention the fact that marijuana is notoriously finicky to keep alive – are chief concerns.

Khwaja is researching modifications for tinyFarm but says that, for the moment anyway, his focus is on “feeding people.”

To date, only a few growing units are purpose-built for pot and are still in prototype or early-market stages – or sold out.

Grobo, developed in Waterloo, is a tall, discreet growing box that would look lovely in a living room and boasts security features like a locking door, fluid glass to mask contents, and air filtration. And WeeGro, used by licensed medical marijuana growers, is also customizable to allow users to disguise or display as desired.

Whether growing herbs or herb, the demand is strong and consumers primarily want simplicity.

“If it’s easy, they’ll do it,” says Heather Dubbeldam. “If it’s complicated, they won’t.”

If Randy Rowe’s experience is any indication, consumer demand for cannabis-centric systems is high.

He’s the president of Grow Up Cannabis Conference & Expo, which had its inaugural show in October in Niagara Falls. It drew around 4,000 people, many of whom were interested in growing their own.

Rowe says anyone who comes out with a consumer product that can grow everything in one box will hit the mark.

“That said, growing marijuana is an art. To be able to grow your own is hard,” he says. “It’s why you don’t see people growing their own tobacco.”

Back at Modgarden, Khwaja is finalizing the product for a summer 2018 launch.

“This is the appliance of the future,” he says, before comparing it to a fool-proof (if less sustainable) kitchen gadget. “I see this as the Keurig of fresh salads.”