How Airbnb is clashing with Toronto condo residents 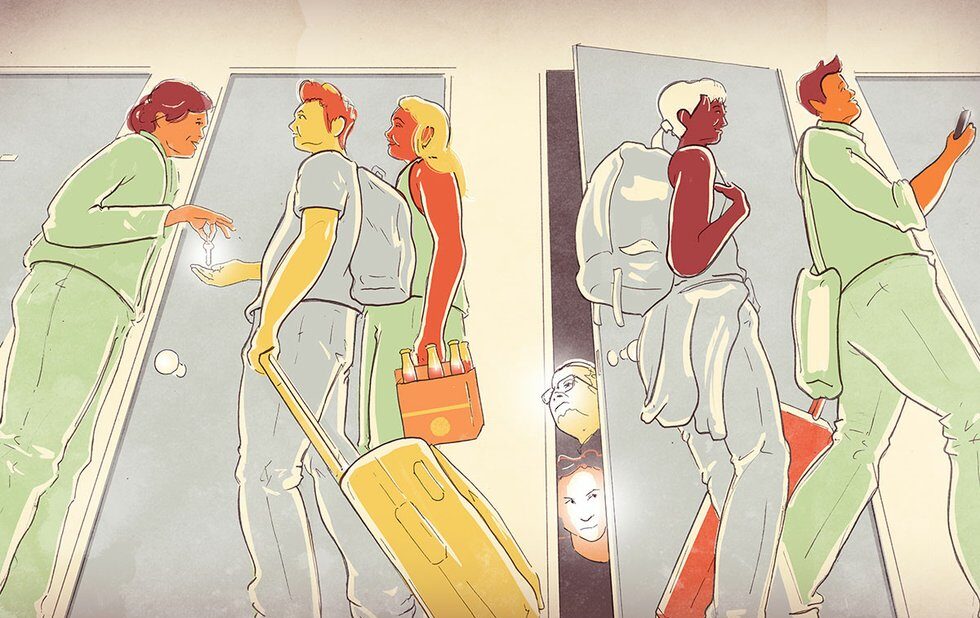 On any given weeknight at 151 Dan Leckie Way in CityPlace, residents are likely to discover garbage and spilled beer in the hallways, or vomit in the elevators. It’s the fallout from rowdy Airbnb guests who have rented a unit in the building to party for the weekend.

One condo owner, who asked to remain anonymous, says the unit adjacent to his is used solely for short-term rentals and is notorious for massive, noisy parties.

“Police have come to the Airbnb on many occasions. Someone has been arrested and people have thrown up over the balcony,” he says. “This has been going on for two years. My fiancée and I are moving out because we can’t deal with it anymore.”

Airbnb and other short-term rentals are common in neighbourhoods across Toronto, but they’re especially pervasive in downtown condos – and causing major problems for long-term residents.

Condo dwellers have complained about Airbnb guests making excessive noise, parking in residents’ spaces, accidentally walking into the wrong units and adding to the general wear and tear of common spaces, like hallways and amenity rooms. The now infamous Chair Girl – who flung a patio chair off a condo balcony over the Gardiner earlier this year – is an extreme example of the worst type of Airbnb guest.

Meanwhile 72 per cent of Airbnb’s revenue in Toronto is generated from “ghost hotels,” which, according to the city, are Airbnbs run by hosts who have more than two entire home listings.

“Condos provide ready-built ghost hotel suites because the majority are one-bedrooms and people may purchase them as investments or to sublease them to companies that run them as ghost hotels,” says Thorben Wieditz, a researcher for Fairbnb. “They make more money on the short-term rental market than they would on the long-term rental market.”

Wieditz notes that some condo dwellers have no course of action to deal with Airbnb, since their condo boards are made up of entirely of owners who rent their units strictly as short-term rentals.

That’s what happened to the resident at 151 Dan Leckie Way. After he and a few neighbours complained about the Airbnb on their floor to no avail, he learned that the unit was actually owned by the condo board president. That president resigned after the board was made aware of the conflict of interest, but an employee of the former president is still on the board and the issue persists.

Condominium lawyer Denise Lash says that, along with cannabis, short-term rentals is the most common issue facing local condo boards. She says that even if a condo explicitly prohibits Airbnb, that doesn’t prevent owners or long-term tenants from using the service. In those cases, the condo board might deactivate fobs or send an official letter from its lawyer and force the Airbnb host to reimburse for the legal fee.

“I [work with] one building by St. Lawrence Market that doesn’t permit it and we did 15 letters in one week to 15 different owners,” says Lash. “We charge $500 to $600 per letter. Some of the owners just pay the legal fee and then say, ‘I’m just going to keep doing it.’”

If a condo’s declaration allows short-term rentals, it can be nearly impossible to change it since that requires 80 per cent of the owners’ consent. In those cases, Lash says the best option for condo boards is to develop rules that work around short-term rentals.

One of her clients, a condo on Fort York, implemented Airbnb’s Friendly Building Programme, which allows residents to know which units are hosting, how many guests are staying and when they’re checking in and out. The program also gives hosts property insurance up to $1 million, and the condo gets to keep a percentage of the booking revenue.

Although Airbnb says the program is active in Toronto, the company could not provide information on how many buildings are involved. Lash says many of her clients have tried to implement the Friendly Building Programme without success.

Right now, each condo has its own rules for Airbnb. However, this could change if the city regulates short-term rentals. In December 2017, city council approved new regulations that would only allow short-term rentals if it were the host’s primary residence. Hosts could also only rent up to three bedrooms or their entire home for a maximum 180 days of the year.

These regulations are currently being appealed and await a hearing at the Local Planning Appeal Tribunal (formerly the Ontario Municipal Board) in August. In the meantime, councillor Joe Cressy, whose ward contains CityPlace and the waterfront communities, is calling on Airbnb to voluntarily abide by the city rules already approved.

But for some residents, like the man at Dan Leckie Way, the current disruption from Airbnb has made his home unlivable.

“Even though a school is being built nearby, my fiancée and I don’t think this is a conducive environment to raise children. You walk into the elevator and there are a bunch of young, belligerent kids. We’ve gone to multiple board meetings and it’s gone nowhere. We’ve decided we have to leave.”