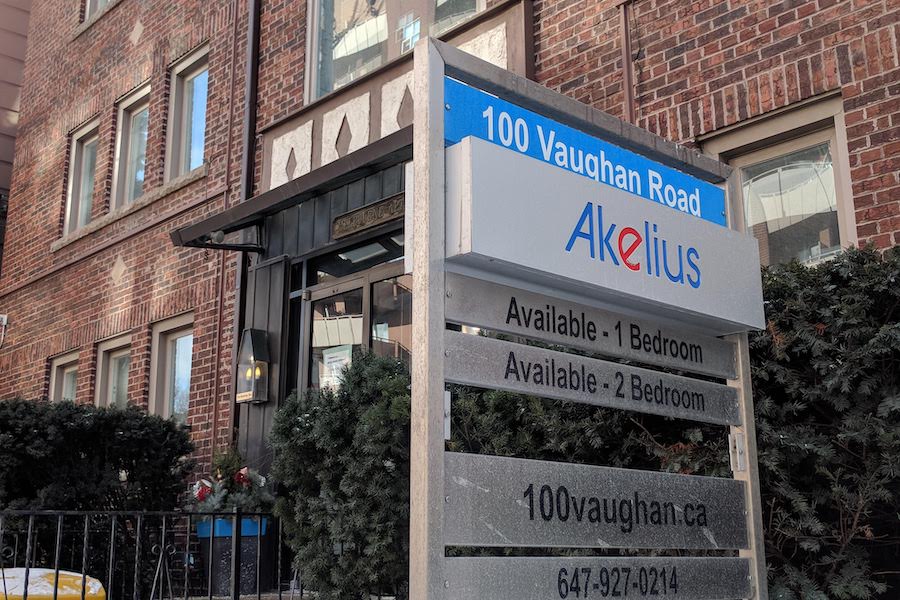 Tenants living in a Toronto apartment building owned by Akelius Canada say they lived for three months last spring without reliable access to cold water, according to a recent filing to the Landlord and Tenant Board (LTB).

In the February 1 filing, 19 affected tenants residing at 100 Vaughan Road allege they were unable to take showers, wash their hands or even use the toilet intermittently over 96 days during the first-wave lockdown.

According to the 37-page filing, cold water service was “severely disrupted” in 11 out of the building’s 33 units, from February 19 to May 24, a period that included “lengthy outages.”

The filing states disruption occurred because a valve supplying water to the north side of the building was shut off, leaving only hot water and very low water pressure.

“These tenants went through a nightmare trying to get a basic utility fixed that was affecting their quality of life and basic functionality,” says Josh Matlow, the city councillor for the area. “Our experience with Akelius is that they were evasive with answers, unresponsive and completely negligent.”

The tenants say the service was restored after a plumber that was on site for a separate issue realized the reason for the shortage and turned the valve back on.

The complaint accuses Akelius of failing to maintain the building “in a good state of repair and fit for habitation” and failing to comply with health, safety, housing and maintenance standards under the Residential Tenancies Act.

In a statement to NOW, Aklelius blames the situation on deferred maintenance on old, deteriorated water lines. The company acquired the building, which was built in 1935, in December 2018.

Björn Endruweit, head of Akelius’s Toronto operations, tells NOW the water was not restored “as fast as hoped,” neither confirming nor denying the length of time the affected tenants lived without consistent cold water.

However, he maintains that showering and using the toilet was always possible.

“To make it clear, there has been water at all units at all times,” Endruweit wrote in an email to NOW. “The low water pressure was insufficient but we did a workaround to provide enough warmer water at regular pressure. Taking a shower and flushing the toilet was possible at all times.”

Endruweit says the low cold water pressure issue intensified during the first lockdown and to minimize tenant interactions, the company “proceeded with a series of repairs in an incremental fashion.”

Management and various plumbers or maintenance technicians said a notice had to be given to shutdown water in the building, and Akelius did not have accurate plumbing schematics for the old building.

Permits were required for work (though the filing alleges that applications for permits were never filed) and COVID-19 restrictions meant repairs could not be completed.

“The situation at 100 Vaughan Road has caused inconvenience to the residents,” Endruweit says. “However, the situation itself is not completely surprising for 85-year-old building with maintenance needs. It is not us who caused the deferred maintenance but we are prepared to rectify it.”

In the complaint, the tenants do not dispute that incomplete plumbing records are to blame for the prolonged cold water shortage. But they argue the landlord has a responsibility to maintain accurate records and should be held responsible for the resulting loss of a “vital service” – i.e. cold water.

The allegations come as Sweden-based Aklieus is under scrutiny globally from human rights advocates.

A July 2020 report from the United Nations’ Human Rights office alleges that Akelius Residential buys up properties and makes living inhospitable for tenants either by neglect or invasive repairs.

The report claims large property management companies are trying to encourage tenants to vacate units so they can put them back on the market at higher rates.

“Akelius business idea is to give a better living in major metropolitan cities” says Endruweit, in response to the UN allegations. “This means that we acquire old buildings, which very often have a significant maintenance debt. Without renovations these houses eventually will become uninhabitable. Akelius policy is to renovate once an apartments becomes vacant. We never force any resident from his or her apartment.”

Endruweit adds that the allegations in the UN report are based on hearsay, and not proof.

The pandemic has intensified tensions between corporate landlords and renters as tenants groups mobilize across the city against mass evictions and the economic shutdown leaves many renters unable to make ends meet.

“They do really wear you down,” says tenant Alyssa Beach-Wallis. “I know a bunch of tenants moved out since this happened.”

The LTB complaint at 100 Vaughan Road

The cold-water drought at 100 Vaughn began on February 19, 2020, according to the tenants.

A burst pipe in the laundry room needed repair, resulting in a temporary shutdown of hot and cold water. After the repair, the water was turned back on. But, according to the filing, tenants in 11 units did not have a consistent run of cold water from this date, and the situation worsened over time. The tenants allege that the lack of cold water affected the water pressure and often led to scalding hot water coming out of taps.

The tenants say the situation made it difficult or sometimes impossible to bathe or hand-wash at a time when public health officials recommend frequent hand washing to prevent spread of COVID-19. They say they couldn’t clean dishes and produce, use the toilet or access drinking water without significant effort.

The filing describes frequent emails between the tenants and property management. At first, the tenants had occasional trickles of cold water, with some units affected more than others, and then by May 6 the cold water was gone completely until the problem was resolved on May 24, they say.

The filing also alleges that property management insisted the issue would be resolved by partial riser replacements, meaning they needed to enter people’s apartments and tear down walls or replace corroded pipes.

The filing states that the landlord performed renovation work on May 6, 2020, while tenants were still waiting for the cold water to be restored.

Living without cold water in a pandemic

For tenant Alyssa Beach-Wallis, the most difficult part of the ordeal was the inability to count on taking a shower over the three months. The lack of cold water meant there wasn’t enough pressure for the hot water to flow through.

At the start of the cold water shortage, she says she checked the shower every hour or so to see if there was enough of a trickle to take the most basic shower. By May 6, she says her shower was completely dry.

Beach-Wallis doesn’t have a tub. Tenants who do, like Erin Taylor, would fill the tub with scalding hot water and wait for it to cool.

“I had to change my entire routine to suit the difficulties of bathing,” says Taylor, adding she didn’t realize how bad the cold water predicament was until lockdown began in March. Before that she showered at her gym or used her work facilities.

At home, she coordinated shifts with her partner, especially because the bathing process could take two hours. Taylor would fill the tub with hot water in the morning, start working and then take a bath at noon when the water had cooled to manageable levels.

“You never realize how much you use water until you don’t have it,” says Beach-Wallis. She explains that without the cold water to moderate the temperature of the hot water, it became uncomfortable for her and other tenants to wash dishes or produce.

“We got takeout most of the time because it was such a pain to do dishes.”

Beach-Wallis, Taylor and other tenants who were affected by varying degrees also couldn’t rely on taps for drinking water.

Taylor says that, at times, they had enough of a cold-water trickle to slowly fill a glass or take 30 minutes to fill a one litre bottle. But for the most part, tenants filled jugs with hot water and placed them in the fridge.

By May 6, Taylor’s toilet stopped filling. In order to be able to flush the toilet, she and other tenants experiencing the same difficulties would fill the tank with hot water from the kitchen, while being careful not to spill on themselves.

Taylor says she refrained from drinking water during this period to avoid having to wake up in the night to use the facilities. Filling a toilet tank with hot water in the middle of a night became an ordeal.

“By the time you do that you are so much more awake,” she says. “You can’t really go back to sleep… The experience caused me really severe distress.”

On May 24, 2020, plumbers from Power Jet Inc. were dispatched to 100 Vaughan Road to resolve an issue with excessively hot water temperatures reaching 76 degrees celcius.

Taylor happened to catch them outside while returning home from a walk. She inquired about the work they were doing, which led to a conversation about the ongoing cold water issues. According to Taylor, the plumbers from Power Jet Inc. were shocked to learn 11 units lacked cold water and were not aware of the situation.

“All they did was turn on a valve that was turned off,” says Taylor.

The 100 Vaughan tenants association provided emails, exchanges between the affected residents expressing relief after discovering that their cold water was flowing again mixed with bitterness that property management did not identify the simple solution three months prior.

It turns out a valve had been shut off during the February 19 repair to the laundry room. The plumbers or technicians Akelius sent failed to turn it back on.

“The plumbing company that fixed it were able to do it so quickly,” says Taylor. “It seemed like it must have been obvious.”

“All repairs were undertaken in communication with Toronto bylaw officers,” says Endruweit, responding to the LTB filing, which alleges that Akelius misled bylaw officers. “Toronto bylaw did not propose any alternate course of action or issue any orders.”

Councillor Matlow hosts town hall meetings so Toronto tenants are informed of their rights. He notes that the tenants association at 100 Vaughan are able to fight back and file a grievance at the LTB because they are organized.

“Everybody worked together as a team throughout the whole thing,” says Taylor, who adds that such organizing was especially vital during a pandemic. “The tenants association was such a source of support.”

Taylor also points to the financial details of their complaint to the LTB. The tenants are asking for a $35,000 fine to be imposed per affected unit to the sum of $385,000. Taylor and Matlow agree that such a small amount won’t make a dent in the international company’s finances.

“Landlords don’t have a fear of reprisal,” says Matlow. “They need heavier consequences… There needs to be better protections for tenants from parasitical companies like Akelius.”