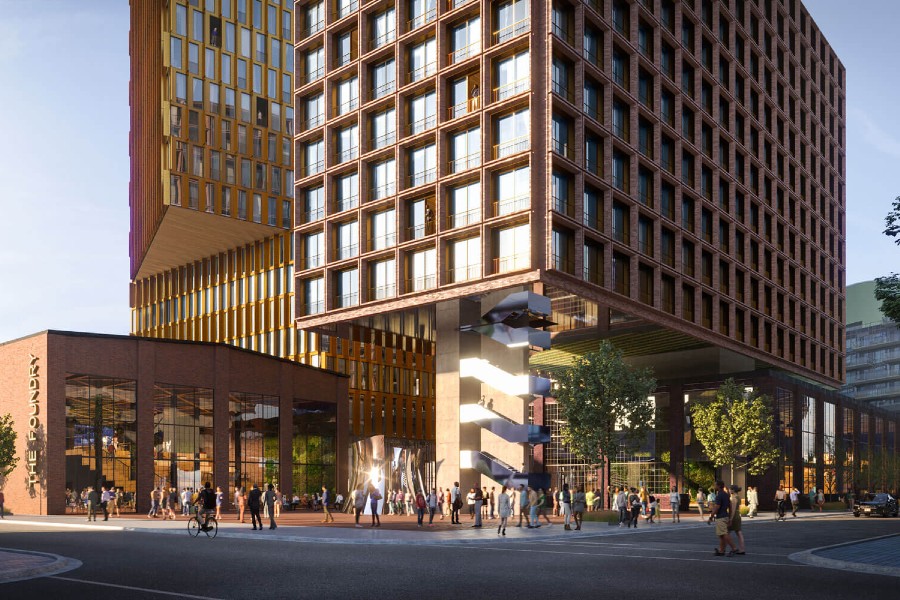 Friends of the Foundry released design renderings on Wednesday in collaboration with local architects demonstrating what the future of the Dominion Foundry site could look like.

The designs – one was released February 24 in collaboration with community advocate group Friends of the Foundry and another was unveiled a day later – come after weeks of legal battles and protests over the Ford government’s plan to demolish the West Don Lands site.

The province owns the Dominion Wheel and Foundries Company site, which includes four heritage buildings, and began demolition of the buildings on January 18 with stated plans of building market and affordable housing.

However, local advocates and politicians fought back against the demolition, which Ontario began without doing consultations or providing notice to the city.

An Ontario Divisional Court judge ruled on January 29 that the province would have to stop demolition until the following month after the St. Lawrence Neighbourhood filed an application for an injunction.

Justice David Corbett ruled the demolition contravened the Heritage Act, and noted the province did not provide a Heritage Assessment Report to the city before proceeding with demolition.

The hearing following the decision from the court scheduled for Friday was postponed to allow for negotiations between the province, the city and the community.

The province has stated that they plan on constructing new affordable housing, market housing and a community space on the site. Their plan would provide 264 affordable housing units, or 25 per cent of all units.

However, they planned to do so by tearing down all four heritage buildings. A representative from the office of the Minister of Municipal Affairs and Housing, Stephanie Bellotto, confirmed in a statement over email that the “Heritage Impact Assessment conducted for the site determined that the structures require demolition to allow for environmental remediation, including soil and groundwater remediation.”

While the Ford government has said that demolition is necessary for “environmental remediations,” designs put forward from local architects and designers argue that the construction of housing, community spaces and more on the site would be possible while still preserving heritage elements of the buildings.

Friends of the Foundry’s proposal

Friends of the Foundry teamed with KPMB Architects and Ken Greenberg, an urban designer, to create an alternative vision for the site that maintains two of the four heritage buildings.

Greenberg tells NOW he doubted from the beginning that knocking down buildings would be necessary to build affordable housing.

“We have so many examples of remediating sites at buildings from similar periods, and integrating them successfully with other developments,” he explains.

His proposal intends to demonstrate that it is possible to provide a “robust” housing program, retain parts of the original heritage buildings and create space for cultural and community events. The design concept would introduce three new residential buildings equalling 870 units, the tallest of which would be 30 stories. The three buildings would be a mix of affordable rental and market housing.

The concept, created by KPMB architects Shirley Blumberg and Bruno Weber, also shows how two of the buildings could be preserved.

“We realize that it would be difficult to retain all the heritage buildings on the site, and so proposed the conservation of the two of greatest value: the Foundry and the Machine Shop. It is important to foreground the historic buildings in their current form, intact and activated by new community uses,” Blumberg writes in an email.

The other two buildings would be torn down and replaced with the new residential ones.

The proposal differs from the province’s plan not only by keeping heritage elements in the design, but also by better reflecting the “unique characteristics” of the West Don Lands neighbourhood, the architect says.

“We respect the mid-rise scale of buildings, with the taller tower on the north-east periphery, close to the River City tower of the same height,” Blumberg explains.

Friends of the Foundry also brought in affordable housing advisors Sean Gadon and Mark Guslits. They determined the province’s plan, which promises 264 affordable rental homes, is only equal to 25 per cent of the total.

The advisors proposed 30 per cent affordable housing units instead to align with the standard of other West Don Lands projects. They also noted that the province’s plan only provides 40 years of affordability, when the target should instead be affordability in perpetuity.

The concepts highlight the added value of keeping heritage elements of the Foundry site, noting that the conservation of heritage buildings and integrating of new development can add between 10 to 20 per cent value to the real estate.

“There is definitely a way to really have what I would call a win-win-win-win on here, which is conservation of an important set of heritage buildings, integrating new development, ensuring there’s an affordable component to new housing and thinking about community space,” Melanie Hare, partner at Urban Strategies, tells NOW.

All three layouts would allow for 1,045 additional residential units, and Urban Strategies say they can meet the provincial standard of 25 per cent affordable units (equal to 264 units) or possibly exceed it. The 264 units would include 159 family-sized units with two, three or four bedrooms and 15 per cent would be accessible.

One of the design concepts from Urban Strategies includes two buildings of market housing and one of affordable housing.

The proposal also plans on keeping the Machine Shop and the Foundry, as proposed by Friends of the Foundry. Urban Strategies would also maintain the Eastern Avenue facade. The other two buildings would be torn down, to be replaced by residential ones.

Both plans resemble the province’s plan for rebuilding, while also showcasing how heritage elements can be maintained – similar to what was done at the Distillery District and Wychwood Barns.

“We have come such a long way from the period of renewal when the way to do redevelopment in cities was to flatten everything and start over,” Greenberg explains.

When it comes to community spaces, Tim Hurson, an author and leadership and innovation speaker and a representative from Friends of the Foundry, says community consultation is essential.

“We took a kind of agnostic approach to exactly what would go into the community spaces,” he says. While the proposal from Friends of the Foundry outlines some options for the space, including performances, workshops, galleries, education and even childcare, Hurson says the decision will hopefully be up to community members.

“For so many decades, we’ve understood the city as a layered creation with cultural value and memories, and we see the opportunities for adaptive reuse of structures that have architectural qualities that can be replicated in new construction,” Greenberg says. “It seems a crime to approach the site so crudely, with such a preemptive strike, and especially to communicate with the public by bulldozer.”

Bellotto confirmed that the provincial government recently held consultations with the West Don Lands Committee, the St. Lawrence Neighbourhood Association and the Corktown Residents and Business Association to hear from the community how some elements of the existing structures could inform development.

The government’s online public consultation is open until March 4 on the Government of Ontario’s website.

A CBC report published Monday highlighted the existence of a closed-door deal between the provincial government and undisclosed buyer to sell the Foundry site in September.

However, the province has not disclosed any details about the negotiations and has stated that the site has still not been sold.