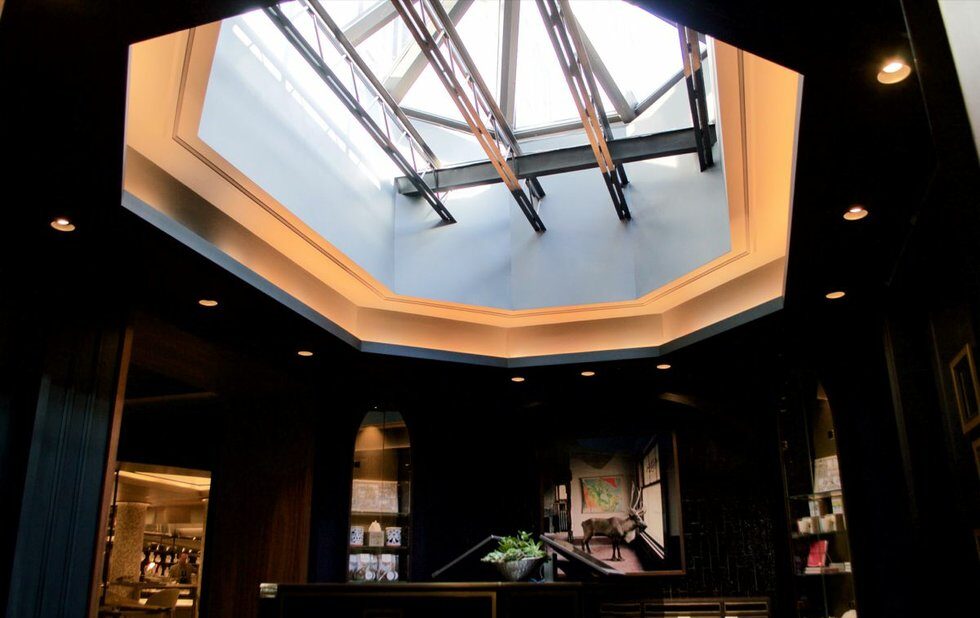 The Anndore House (theanndorehouse.com) was once the Anndore House and Apartments, a luxury hotel and residential building catering to the well-heeled business crowd in the ’50s. Then, it was the Brownstone Hotel, which for a time was home to one of the coolest, darkest jazz bars in town, run by legendary maitre’d Louis Jannetta. Then it became a dingy Comfort Inn.

Now, following a yearlong renovation by its new owners, the Silver Hotel Group, all that remains of the Anndore’s last incarnation is a Yelp page with a two-star rating.

The 10-floor, 113-room hotel reopens to the public Thursday (April 12) with a new look, as well as a hotly-anticipated new restaurant, barbershop and cafe. In a sense, GM Anthony Campaniaris says, the Anndore has come full circle.

“Its a throwback to what it originally was, which was a hotel intended to become a residence,” he says. “Our overall goal is to have guests come here, and experience it like they would a friends house, or their own house.”

That vibe is apparent in the modern-but-unfussy rooms ($299 and up suites start at $399), which come kitted out with record players, snuggly blankets and stylish seating areas but also in the approach to service.

The check-in desk, for example, is actually an open, round table where staff and guests can stand side-by-side: “Its more conversational than it is transactional,” Campaniaris says.

But the Anndore, catering neatly to a demographic that loves frills-free, self-directed travel (hello, Airbnb) and hates waiting in line, also allows guests to bypass check-in completely and roll directly from the street into their rooms, thanks to the hotel’s proprietary app.

It also serves as a room key and allows you to control the temperature, lights and TV, order room service and check out a list of suggested events, local businesses and activities curated by the hotel staff.

Retro touches contrast that boutique-y modernity and reference the hotel’s roots. We wanted to make sure we were paying homage to the 50s, to the heyday of the Anndore Hotel and Apartments,” Campaniaris says.

“Many of the touches weve been able to include in the rooms are a little nostalgic the record player, the record collection, the postcards that are takeaways for guests, the artwork.”

The in-room records are from Kops on Queen West, and Campanairis hopes that as the hotel grows, they’ll have a whole library of records in the lobby guests can borrow from.

Campaniaris says the hotel wants that home-away-from-home vibe to resonate just as much with guests that come from down the block. “Theres 5,000 condo units that have gone up on this street,” he says. “They dont have a space to gather, they dont have a home away from home so we want to become that space for them.”

To that end, there’s Constantine, a 140-seat restaurant that takes up much of the restaurant’s first floor, helmed by La Palma’s Craig Harding and Alexandra Hutchison. The Mediterranean-focused spot will feature an open kitchen surrounded by what Campaniaris calls “living-room-like wings” off to the side, allowing guests to still feel like they’re part of the action of the restaurant.

Scarlet Door, an adjoining coffee shop, will serve the neighbourhood and upstairs rooms “from early til late” and a new location of Crow’s Nest Barbershop. Windows between the cafe and barbershop will add to the open feel, and a 40-seat terrace outside will follow in the summertime.