Sorry, you might not be allowed to smoke pot in your condo 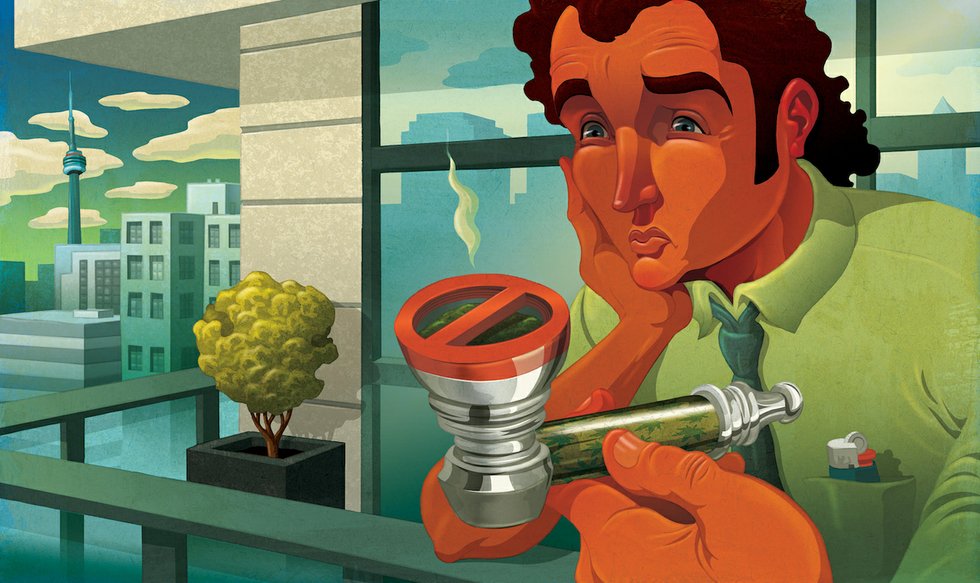 When cannabis is legalized across Canada, Toronto condo dwellers eager to light up inside their homes may see that dream go up in smoke.

In Toronto, some condo boards are planning to ban smoking weed inside both individual units and on balconies despite personal residences being one of the few places where smoking will be allowed under the current proposed legislation.

At Emerald City One, a condo near Sheppard and Don Mills, the future is not so green. The board wants to prohibit smoking because it already gets so many complaints about marijuana odours wafting between units. Residents say the smell triggers asthma and allergies, and they’re concerned it’ll only get worse once cannabis is legalized.

“People can still do edibles and vape,” says Andreea Birloncea, the board president. “We’re not against marijuana use, we’re simply saying there are so many other options to get the effects of marijuana without inconveniencing your neighbour.”

The board is drafting up a rule that would ban smoking cannabis in individual units as well as on balconies, which is considered an “exclusive-use common element,” meaning that similar to a lobby or rooftop terrace, it’s a portion of the building that belongs to all owners.

But can condo boards actually ban a soon-to-be legal substance?

According to Deborah Howden, a lawyer specializing in condominium real estate, it is possible. Under Section 58 of the Condominium Act, condo corporations can create new rules that “promote the safety, security or welfare of the owners, and prevent unreasonable interference,” says Howden.

She explains the pungent smell of second-hand smoke could be considered a nuisance and therefore a new rule restricting smoking cannabis would be reasonable. Medical marijuana users would be exempt under the Ontario Human Rights Code.

As legalization nears, Ontario landlords are also concerned about how they will address tenants smoking indoors. The Ontario Landlords Association wrote on its website that allowing tenants to smoke and grow plants indoors would lead to a “financial disaster,” since landlords would have to pay thousands to remove the smell of marijuana from apartments. Landlords can ban smoking in new leases, but it’s illegal under the province’s tenancy laws to change a lease before it ends.

While the current provincial legislation prohibits smoking within indoor and outdoor common areas in condos and apartment buildings, earlier this month Ottawa Public Health recommended the province go one step further and ban smoking and vaping, both medicinally and recreationally, within all condos, apartments and balconies.

“Landlords and condo boards are throwing the recreation smoker into situations where they have to break the law by smoking out on the street or in their own dwelling, where they could get evicted or fined,” says James. “To some degree, this is the hypocrisy of the current restrictions around [recreational] consumption.”

Howden understands that there will be some condo residents who believe that once cannabis is legalized, they should be entitled to smoke within their own dwelling. But unlike buying a detached home, owning a condo comes with a different set of rules.

“People have to remember what they’ve bought,” says Howden. “When you’re a part of a condo community, you agree that everybody is going to be bound by the same rules so that everybody gets to enjoy the property in the same manner.”

Birloncea expects there will be a few residents who will be unhappy when the Emerald City One condo board proposes the new rule but that the majority will be supportive.

“In high-density living, you have to respect your neighbour’s health, rights and ability to enjoy their own unit, too,” says Birloncea.