Co-working spaces are the latest trend in Toronto condos 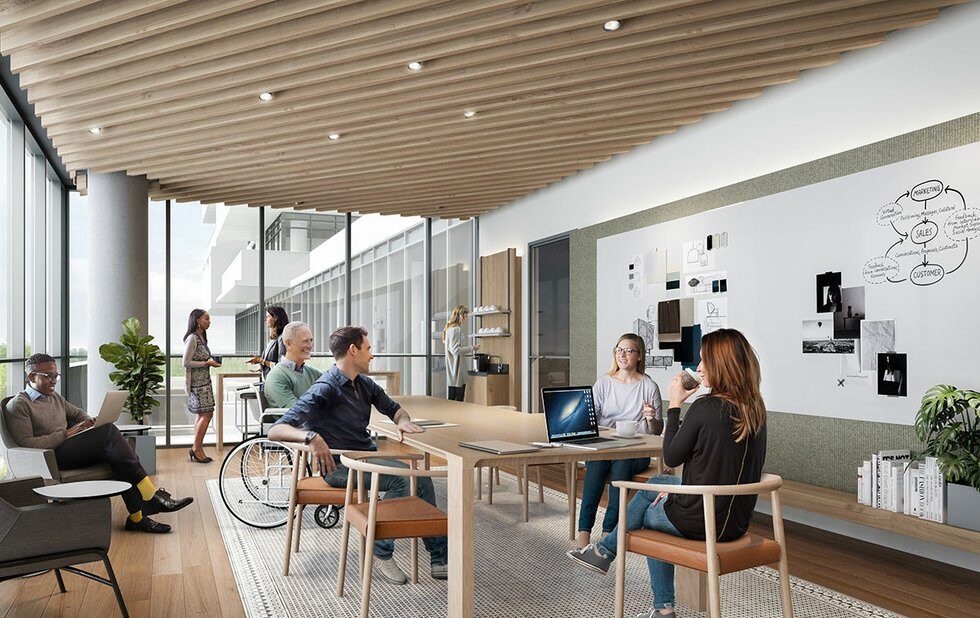 As units get smaller

As units get smaller, shared offices like this one at The Daniels Corporation’s DuEast offer residents a space to work from home.

In the last couple years, a range of co-working and shared office spaces have sprouted up in Toronto, appealing to remote workers, freelancers and entrepreneurs of all stripes. There’s the hyper-trendy, women-only Make Lemonade, the parent-friendly Workaround, the architect- and interior-designer-geared Fold, and WeWork, the original co-working behemoth, which now has five locations in the city and nearly 300 worldwide.

As the gig economy grows, so does the demand for co-working spaces. According to a 2017 report by human resources consulting firm Randstad, non-traditional workers like independent contractors and remote workers make up between 20 and 30 per cent of the workforce in Canada.

In Toronto, where developers use amenities to attract potential residents in a competitive market, many condos are now adding co-working spaces right into their buildings.

These spaces feature a variety communal desks, private offices for meetings and more casual areas with sofas and lounge chairs. Most have coffee stations, some have printers and TVs, and all are as stylish as your local WeWork.

Interior designer Kelly Cray of U31 recently designed the interiors for the Graywood Developments’ Peter and Adelaide condo and Line 5 (Reserve Properties) near Yonge and Eglinton, both of which have co-working spaces. “There’s a real shift in how people do business. Everyone used to go to the office from 9-5, but that’s not the case any more,” says Cray. “You have the opportunity to use these amenities spaces [similar to] WeWork, but they’re covered in your maintenance fees.”

The Daniels Corporation has incorporated co-working spaces into three other upcoming projects: DuEast (Dundas and Parliament), ArtWorks (Dundas and River) and the Wesley Tower in Mississauga. Dominic Tompa, VP of sales at Daniels, says the company added co-working spaces because it noticed students and young professionals were constantly using their laptops and holding client meetings in the lounge spaces of Daniels’ condos.

“We wanted to create an environment for people who are self-employed, working for small start-ups or for companies that allow them to work from home,” says Tompa. “When you’re a small, one-person company, it’s just not feasible to rent office space.”

Indeed, a dedicated desk at WeWork in Toronto costs $770 per month, while at Make Lemonade, it’s $500 per month.

One reason a freelancer or entrepreneur who works from home might opt to fork out for a desk at place like WeWork, however, is the opportunity to network, collaborate and brainstorm with like-minded workers. At the very least, it offers the chance to talk to another human besides your barista. In a condo, where many residents may never even chat with a neighbour in the elevator, it’s unlikely these co-working spaces will become inspiring, collaborative hubs. Official co-working spaces like Make Lemonade also host networking events and speakers, and organize workshops for members. For those who can afford the monthly fees (many co-working spaces have cheaper rates for shared desks), these benefits are worth it.

CentreCourt has added large co-working spaces to two upcoming projects, 411 Church (located near Church and Carlton) and PRIME (Jarvis and Carlton), believing such amenities will actively be used by residents.

Gavin Cheung, VP of sales at CentreCourt, says many amenities become “an albatross” for condo corporations. He points to the outdated games parlours with broken pool tables and ping pong tables, media rooms that have become obsolete now that everyone has a flat-screen TV in their own units, or niche-spaces like poker rooms. While those amenities sit vacant, he notes that “if you go into any of the Starbucks around 411 Church and PRIME, you’ll immediately see there’s hardly a place to sit down.”

Many of the new projects are made up of one-bedroom, one-bedroom-plus-den and two-bedroom units, and are marketed toward young professionals or students. Many units are so small, residents have to decide between a sofa or a workstation.

Also, as more and more young couples get priced out of single-family homes in Toronto and are raising kids in condos, it’s more practical to turn the den or second bedroom into a nursery than an office.

“Some people are living in 550 square feet and there’s only so much you can do with that square footage,” says Cray. “Amenities become anextension of your space.”