Ahead of legalization, some condos are banning residents from growing cannabis

Even though home growing is legal under the Cannabis Act, condo corporations are able to create their own rules 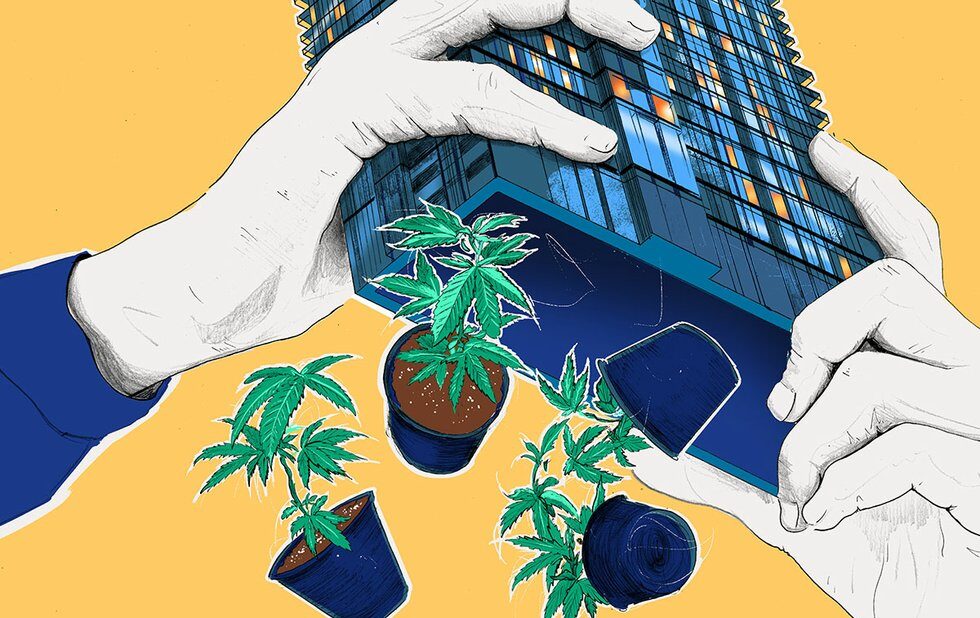 Federal rules permit home cultivation of pot, but condo boards are able to ban legal activities that could disrupt neighbours.

When cannabis is legalized on October 17, Ontarians will be able to grow up to four plants per household. Except, maybe, if you live in a condo.

Across Toronto, hundreds of condo boards have banned residents from smoking and growing cannabis inside their individual units and on balconies.

Deborah Howden, a lawyer specializing in condominium real estate, says condo boards have enacted these new rules over concerns of the pungent smell and potential mould that could form as a result of cannabis cultivation.

Howden notes that even though home growing is legal under the Cannabis Act, condo corporations are able to create their own rules that “prevent unreasonable interference with the use and enjoying of [an owner’s] unit and common elements,” such as a balcony.

“It’s really not relevant whether the activity is legal because there are many activities that are legal that condo corporations may have a rule against,” Howden says. “Displaying advertising signs in your windows or having shaded window coverings of a certain colour is legal, but it may be against the rules of your corporation.”

The exception is if someone needs to grow cannabis for medical purposes, the condo board would have to accommodate those residents on a case-by-case basis under the Human Rights Code.

Exhibit Residences, a luxury condo near Bloor and Avenue, passed a new rule prohibiting smoking and growing cannabis at the end of September. Ron Schmidt, the president of the condo board, says although the board hadn’t received any complaints from residents about the smell of cannabis, they wanted to get ahead of legalization to prevent any potential issues in the future.

Indeed, Howden says boards have rushed to enact new rules prior to legalization to avoid grandfathering, which is when a person who engaged in a legal activity prior to a new rule change would be entitled to continue engaging in the now-prohibited activity. So if a resident had already started growing cannabis after October 17 but prior to a new rule being enacted, they’d be exempt.

Although the federal Cannabis Act permits home growing, Manitoba and Quebec have banned home cultivation altogether. And some Canadian cities, like Whistler, have created specific rules stipulating plants must not be visible to the public. No such rules exist in Toronto, and since many Torontonians live in high rises without access to backyards, indoor growing is likely their only option.

Bjorn Dawson, the CEO of Grobo, a compact hydroponic indoor growing system, says many condo boards are unaware that smell-proof planters exist. “Grobo is sealed to reduce smell and we use carbon filters to scrub the air and remove odours,” he says. “At the legal limit of growing four plants, you won’t have any mould issues. It’s the same impact as having any four houseplants in your home.”

Because of Grobo’s small footprint – it’s about the size of a water cooler – many of their customers live in condos or apartments, and they use it to grow cannabis for either medicinal or recreational purposes.

According to Schmidt even though these growing systems sound impressive, if a condo corporation were to allow specific indoor planters (like Grobo), it would be too labour intensive for the condo board or management to regulate usage and control what types of planters are permitted.

“When you start getting into the minutia – this thing is okay, that thing isn’t okay – it gets complicated very quickly, and so that’s why we did not go down that route,” says Schmidt. “We don’t want to be Orwellian here or turn it into a police state. People have a right to their privacy in their home, as long as it doesn’t disturb someone else. That’s the good neighbour approach.”