As city dwellers compete for green space, high-rise developers are starting to cater to canines 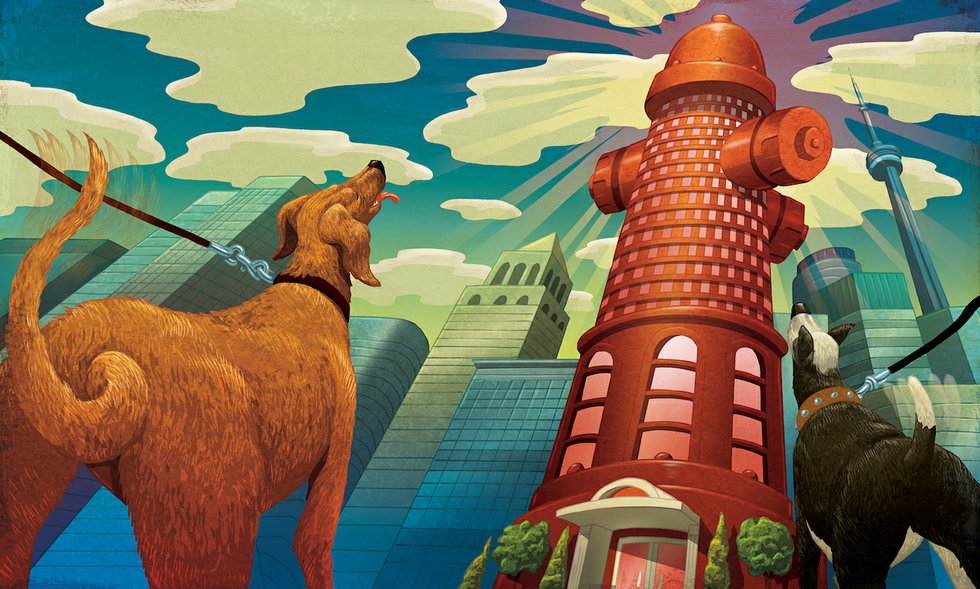 There are three to five dogs per floor in Toronto condos, according to city planning staff.

When developers designed some of Toronto’s densest condo communities, they never planned for the sheer volume of one type of high-rise dweller: the dog.

According to city planning staff, there are around three to five dogs per floor in condos. Unfortunately, many condos lack the infrastructure to handle this population, causing a slew of problems for residents.

At The Spire, a luxury condo near Adelaide and Church, residents footed the $500,000 bill to replace their dog urine-contaminated parkette last summer, and last month, the condo board at Quad Lofts near King and Spadina ruled that dog owners will have to pay an additional $15 fee for each dog per month to offset cleaning costs.

In some condo complexes across the city, an unlikely turf war is brewing between parents of young kids and dog owners battling it out over the few tiny green spaces. The conflict has become so intense at Rita Cox Park in Liberty Village that dog owner Sarah Gribeauval has started an online petition proposing a new dedicated dog park near Lamport Stadium.

“I have witnessed hostile encounters and as the weather gets warmer these situations are only going to get worse,” says Gribeauval. “Not only is the area growing in density with people, children and dogs, but the weather is also bringing more people out to use the space.”

Gribeauval has heard concerns from parents that Rita Cox Park isn’t safe for kids and although the majority of dog owners pick up after their pets, a few irresponsible owners have tarnished their reputation.

“In a lot of ways, being a dog owner in Liberty Village is amazing because there are lots of dog-friendly stores I can bring my pup in when running errands and there’s a great community of other owners who support each other,” adds Gribeauval. “But there’s not enough dog-friendly green spaces. In all of Ward 14, there are only two off-leash areas”

Val Rynnimeri, an architecture professor at the University of Waterloo, says part of the problem is that developers in dense condo communities like Liberty Village or CityPlace didn’t design the spaces with dogs in mind. And since home ownership has become so prohibitive, more and more Torontonians are living in condos long-term and starting families – which include their four-legged furry friends.

“Nobody imagined there’d be that many dogs because places like CityPlace had always had transient populations. It was supposed to be for younger people, single people or couples,” says Rynnimeri. “The great Canadian goal was that a condo would be a starter and then you’d eventually go buy a house on a nice urban street.”

Rynnimeri, who co-supervised Waterloo architecture student Sarah Gertler’s 2017 thesis studying dogs in CityPlace, says although condos could be retrofitted to become more dog accommodating by building amenities like outdoor dog runs in the podium level of a building, it would be a lot easier to ensure that newer buildings had dog-friendly elements already in place for dogs.

That’s the thinking behind a new study underway by city planning staff. “We’re trying to develop what we’re calling pet-friendly guidelines for new developments,” explains James Parakh, the urban design manager for Toronto and East York District. “Most people won’t be living in a house with a backyard where they can just open their back door and let their dog go outside for recreation. So how do we accommodate that?”

City staff and hired consultants are speaking with residents’ associations, BIAs, dog off-leash park associations and other stakeholders. They hope to have a final report with recommended guidelines – which could involve mandatory on-site pet facilities like dog runs or washing areas – ready for council approval next spring.

Until then, some developers have already seen the gap in the market. The Avro Condominiums at Allen and Sheppard will boast a dog run on the ground level, while the Livmore, a new luxury purpose-built rental tower at Bay and Gerrard, will have an on-site pet spa with two wash basins and blow dryers, plus a multi-level dog run and play area.

“Around 30 to 40 per cent of the people living at the Livmore will have dogs, so it’s important that we create a dog run that’s big enough to handle it and well-maintained,” says Todd Nishimura of developer Great West Life Realty Advisors.

Nishimura notes these pet amenities are common in dense American cities, but haven’t caught on in Canada yet. “It’s a missed opportunity in purpose-built rental and condo developments in Toronto,” says Nishimura. “[American developers] already understand that if you’re going to launch a new community, you have to appeal to pet owners.”

Along with amenities, when the first residents move in this fall, the Livmore plans to organize community-oriented events like meet and greets for dog owners, as well as sourcing dog walkers, groomers and other services that could come right to the building.

According to Rynnimeri, these kind of amenities are not only good for the well-being of pets, they also a great way to build relationships between residents in condos, which often lack the sense of community felt in older neighbourhoods. “People who live in apartment buildings in London, Paris, Tokyo or Beijing have accommodated themselves to that kind of social life. But in Toronto, we don’t have those social habits yet,” says Rynnimeri. “Pets are a great social lubricant and [dog-friendly spaces] will make people feel like they’re part of a more permanent community.”