The city has built parks, childcare centres and other community amenities using funds from developer charges, but that could all change with Doug Ford's new housing bill 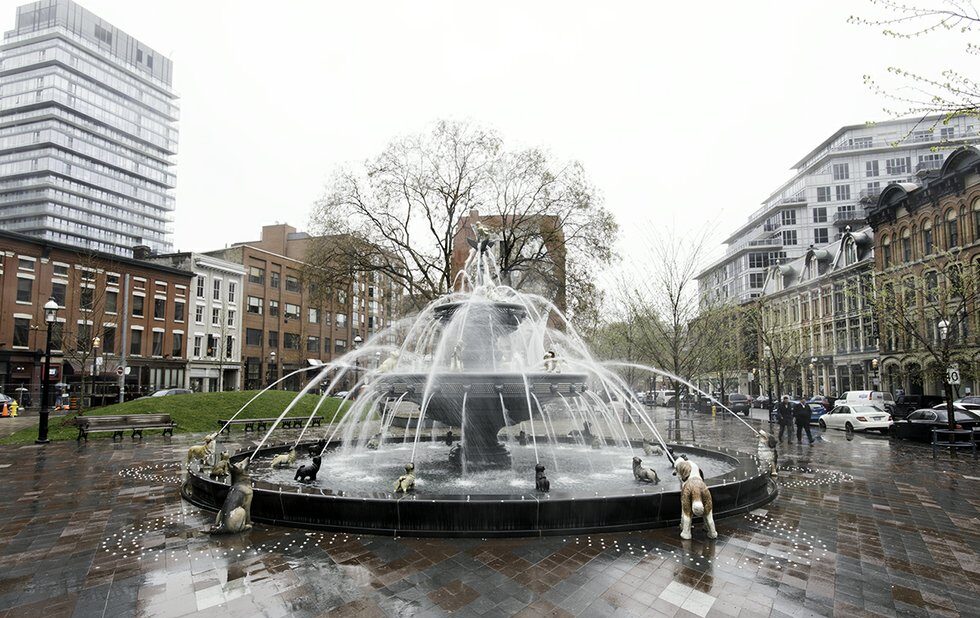 The whimsical dog fountain at Berczy Park near Wellington and Church was funded using Section 37 and 42 benefits.

The new massive seven-acre condo development proposed for Dufferin and Bloor features a lot more than your average glass tower project. Between seven mixed-use buildings, ranging from six to 47 storeys, the site will include a 30,000-square-foot community hub with childcare services within the heritage Kent School and 38,500 square feet of new park space.

“I think a good project is one that offers something for everybody,” says Matt Young, vice-president of development at Capital Developments, which along with Metropia are behind the project. “From a developer’s standpoint, you have to sell these residential units and if you’re not delivering things [future buyers] want or need like community centres, it’ll be harder to sell.”

The province is paying for a portion of the new hub, but the rest of these community amenities are being funded by Capital Developments and Metropia through Section 37 and Section 42 of Ontario’s Planning Act, which allows developers to exceed height and density zoning regulations in exchange for community benefits like daycare spaces and parks.

Across downtown Toronto, many playgrounds, parks, childcare facilities, rec centres, libraries and affordable housing projects have been funded using Section 37 and Section 42 funds. But that’s all slated to change under the provincial government’s new housing bill.

Tabled earlier this month, Bill 108, titled the More Homes, More Choice Act, will repeal how developers are charged and instead create a new amalgamated “community benefits charge” that has a hard cap. City staff and some councillors are concerned this new charge will translate to fewer resources for high-density neighbourhoods already lacking childcare facilities and park spaces.

“[The bill] looks like it’s going to restrict our ability to obtain benefits from developers and tax-paying residents are going to have to subsidize a lot of the infrastructure and services that they don’t have to today,” says councillor Josh Matlow. “The negotiation actually allows for a more thoughtful conversation between the community and the developer that’s not just a debate over height and density.”

With the prohibitive cost of land in downtown Toronto, where parks are already at the lowest per capita, the city has relied on these charges to build new public green spaces. For example, Section 37 and Section 42 benefits paid for the whole $8-million price tag of the Berczy Park redevelopment, which features the playful dog fountain designed by Claude Cormier + Associés, while councillor Kristyn Wong-Tam was able to pool funds collected from multiple projects to build a 0.6-hectare park near Bay and Wellesley.

Using the current system, councillors have also negotiated with developers to add more affordable housing into condo developments, like at the Westbank Corp. development on the former site of Honest Ed’s. The city secured $4 million to create affordable units within the project, in addition to a 3,770-square-foot park.

The proposed bill also requires that funds collected via the “community benefits charge” be used within one calendar year, which could prevent councillors from funding larger or more expensive projects. In Parkdale, councillor Gord Perks collected Section 37 money over years to be able to purchase a rooming house in Parkdale that was under threat. The rooming house is now owned and operated by the Parkdale Neighbourhood Land Trust and PARC to ensure that it remains affordable for its tenants.

Critics of Section 37 and Section 42 benefits, including late former mayor Rob Ford, have referred to the current planning tool as slush funds, where councillors can demand more money in exchange for building approvals.

“We are consulting [with municipal partners] on the best way to replace the current system of ‘let’s make a deal’ planning with a system that puts people and communities first,” says Julie O’Driscoll, director of communications at the Ministry of Municipal Affairs and Housing, in a statement to NOW. “The city is sitting on over $200 million in unspent Section 37 reserves. Some wards have tens of millions of dollars that the councillor manages and spends with no oversight or accountability, while other areas of the city get nothing. It is not surprising that the most vocal opponents to our proposed policy changes are councillors who have the largest amount of Section 37 money.”

“Dufferin and Bloor is an amazing neighbourhood already, but when you’re adding 2,000 new units into the area, you need to bolster that,” says Young. “Large master plan projects need to have a good balance of uses.”

While the housing bill will not impact developments already going through the approval process, like at Bloor and Dufferin or Mirvish Village, it will likely affect future projects.

A memo sent to council by chief planner Gregg Lintern on May 14 states Section 37 and Section 42 currently support critical infrastructure investments, including 12 childcare centres, 17 rec centres and 106 new or expanded parks. “In spite of changes [to Sections 37 and 42], it is unlikely that they will positively impact housing affordability, as Bill 108 does not provide for any mechanisms to ensure the reduced development costs are passed through to future home buyers and renters,” states Lintern.

Currently city council is debating requesting the province extend the June 1 deadline for comments on the legislation. Later this month, Matlow and Wong-Tam will hold a meeting with resident and neighbourhood associations who oppose the bill.

“Developers won the lottery. They’re so happy with the government’s announcement because they’re getting everything they asked for and the communities lose,” says Matlow.