Toronto has a lot of condos but residents need more schools 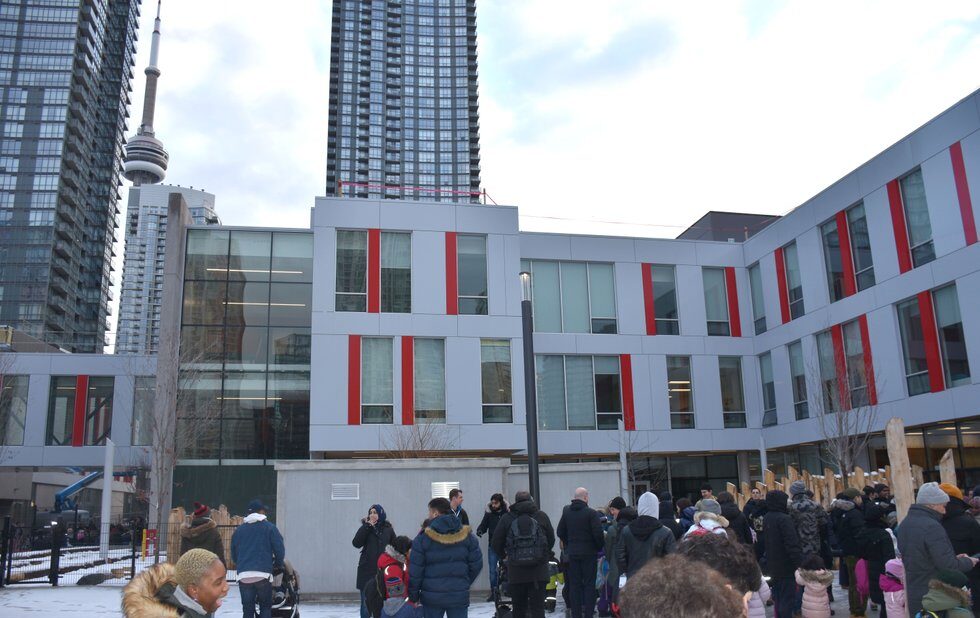 After years of waiting, two new elementary schools have finally opened in CityPlace.

Toronto has a big problem in neighbourhoods experiencing an influx of new condos: a lack of schools.

Fortunately, parents living in CityPlace, the neighbourhood located between Bathurst and Blue Jays Way, Front and Lake Shore, can look forward to shorter commutes now that two long-awaited elementary schools have opened. Both were paid primarily by condo developers.

On January 6, Jean Lumb Public School and Bishop Macdonell Catholic Elementary School opened its doors to around a thousand students aged from kindergarten to grade 8. The two schools are inside the new Canoe Landing multi-use community facility, which is located beside the Douglas Coupland-designed park of the same name. The building contains a shared gym, library and outdoor play areas.

Later this spring, childcare facilities and a community rec centre are expected to also open within the three-storey building.

Kate Whittaker, the secretary for the CityPlace Residents Association, says as the population of the neighbourhood has evolved from transient young professionals to young families, there’s been a greater need for schools and community centres. During her maternity leave in 2018, Whittaker says many of the City of Toronto programs offered for new parents were at capacity at the community centre closest to her. She’s hoping her son can attend the new daycare in the next year.

“During my maternity leave, I was looking at all available options for community support for new mothers,” says Whittaker. “These programs are typically run out of elementary schools, [so] I walked over 40 minutes each way for a program near Trinity Bellwoods park.”

As Toronto continues to build high-rises, there’s increasing pressure for social infrastructure like schools, parks and daycare facilities to be built in tandem. Some current major condo projects, like the Metropia and Capital Development’s six-tower Bloor and Dufferin project and Westbank’s Mirvish Village, have all incorporated parks and community centres into the initial designs.

The construction of the CityPlace schools, which began in 2017, was primarily funded through development levies and charges, as well as Section 37 benefits – the portion of Ontario’s Planning Act that allows developers to exceed height and density zoning regulations in exchange if they fund community benefits.

In neighbourhoods like CityPlace, Yonge and Eglinton, and the Yonge-Sheppard corridor, kids often had to trek several kilometers to go to school. On condo hoarding, builders are required post signs that state children who live in the future towers won’t be guaranteed a spot in a nearby school.

Kris Bhoutika and his wife Anshul bought their CityPlace condo four years ago to be closer to their jobs downtown, but also because their two kids, now in grade 3 and daycare, would be able to live closer to the schools.

Last September, when the schools were slated to open, the Bhoutikas moved from Mississauga and into their condo, which they had been renting out. When the openings were delayed to January, their son was sent to the Waterfront School near Dan Leckie and Queen Quay West, only a 15-minute walk away.

Other parents weren’t as lucky.

“I know some families moved to CityPlace anticipating the elementary schools eventually moved out because their children already outgrew the school age,” says Bhoutika, who sits on the school council at Jean Lumb.

“Because my daughter was too afraid to take the bus – it was her first time going to school – we decided it was best if I took her there myself,” says Cho, who has lived in CityPlace with her husband for four years. “We don’t own a vehicle, so my daughter and I took the streetcar there each morning and [afternoon.] I was commuting up to four hours each day.”

After three weeks, Macy started taking the bus on her own with classmates.

To finance community benefits in condo-dense areas, the city been able to rely on developer fees, Section 37 and Section 42 benefits. But on January 1, the province’s Bill 108 More Homes, More Choice Act went into effect. Affordable housing advocates have argued the legislation will impact the development charges that fund community infrastructure.

Meanwhile in CityPlace, Cho is relieved her daughter can now attend Jean Lumb, only a two-minute walk from their condo, and excited for the positive impact that the new schools will have on the neighbourhood.

“They’ll build a sense of community, which I think is incredibly important considering we all live in condos,” says Cho. “It’s not as easy to have the usual neighbourly interactions as you would in a more suburban setting.”