A new crop of rental projects, chockfull of luxury amenities like yoga rooms and dog runs, is shaking up Toronto’s bleak housing market 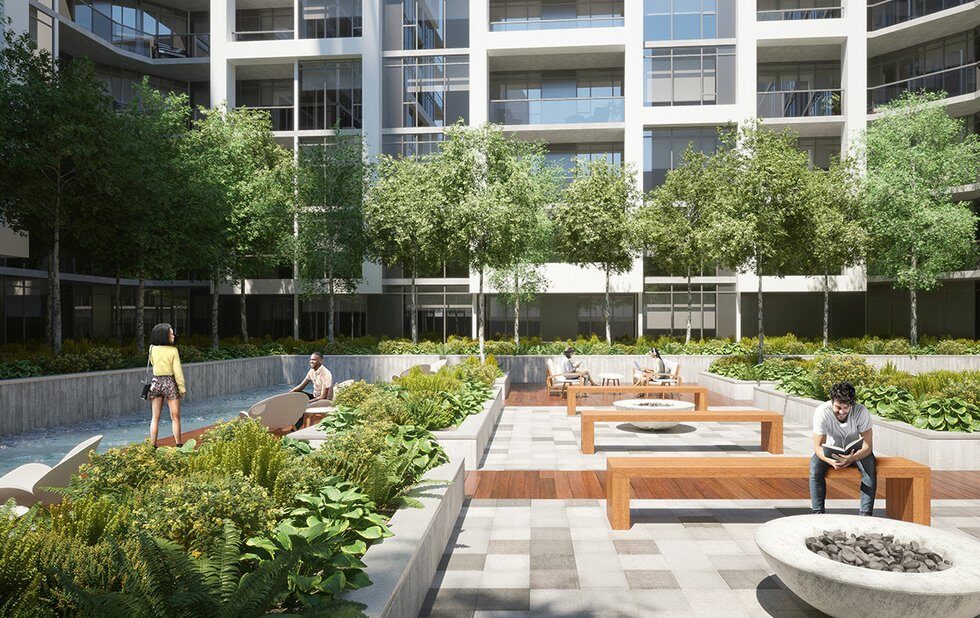 Mintos 39 Niagara includes high-end amenities such as an urban garden.

In the last five years, housing options for renters in Toronto have been bleak. You could rent an apartment in an old high-rise, a floor in a chopped-up Victorian house or a unit in a condominium, where at any moment you might face eviction if the owner decides they want to move in.

However for the first time in decades, there’s been an uptick in private developers constructing a range of new purpose-built rental projects, which housing advocates say is crucial to fixing Toronto’s city’s housing crisis.

In a study published last year by the Ryerson City Building Institute and Evergreen, a non-profit focused on sustainable urban planning, around 8,000 new purpose-built rental units need to be constructed each year to keep up with the city’s housing market.

Generally, these types of luxury rentals cater to baby boomers looking to downsize from single family homes, young professionals priced out of home ownership or people who want condo amenities but don’t want to commit to buying a unit.

One of these new rental projects is Minto’s 39 Niagara, located near Front and Bathurst. It features 501 rental units across a mix of studios, one- to three-bedroom suites and town homes, along with luxury amenities like a swimming pool, sauna, steam room and urban garden with fire pits and barbeques. Tenants will start moving in July 2019.

Paul Baron, vice president of asset management of Minto, says while the company has been building and operating rental properties for 60 years, 39 Niagara is their first project in Toronto decked out with so many extra features. “We’re seeing that renters have higher expectations around amenities,” says Baron.

Near Yonge and Eglinton, Rockport Group is currently building the 233-unit, 27-storey The Montgomery, complete with a dog run, outdoor pool, concierge, gym, yoga room and party room. Designed by RAW Design, it’s situated atop a 1930s Art Deco heritage building and located at the former site of a staging point during the Upper Canada Rebellion of 1837.

“This was expensive land and it would have been a slam dunk as a condo, but the site was too wonderful to build out and sell,” says Jack Winberg, CEO of Rockport Group. “We figured out a way to own it as part of our portfolio as a purpose-built rental building. That seemed to be the best investment opportunity.”

Indeed, at the Montgomery, rents range from $1,920 for a 485-square-foot studio to $6,055 for a three-bedroom, two-bathroom 1,101-square-foot unit. Although Minto wouldn’t provide specific rents for 39 Niagara, they will be priced comparably to the market rent for purpose-built rentals with similar amenities.

With a vacancy rate at less than one per cent and a troubling rise in personal-use evictions and renovictions, Toronto’s rental housing market is in crises. But can luxury purpose-built rental help address the problem?

For Michelle German, senior manager at Evergreen, says that although what the city desperately needs is affordable rental units that can accommodate families, luxury purpose-built rental projects like the Montgomery and 39 Niagara fulfill a big need for people who are downsizing or mid-life professionals who work and live downtown. And although these rental projects aren’t affordable now, they could be in the future.

“Built in the 50s, 60s and 70s, all the huge towers that are around our city were originally luxury apartments for upper-middle class families. Over the years those buildings age, our cultural expectations change, people move into other housing types and now those apartment towers are some of the most affordable we have,” says German. “This is how filtering happens: you add to the housing stock, which changes over time.”

At the old site of Honest Ed’s, Westbank’s massive new project will total nearly 900 rental units and feature amenities like a daycare, co-working spaces, acoustically protected music rooms where residents can play instruments, rooftop gardens for urban agriculture, dog parks and fitness facilities. Roughly 40 per cent of the units will have two-, three- or four-bedrooms – ideal for families.

Although the majority of the units will be priced at market rent, 10 per cent will be affordable, or more specifically, 80 per cent of the city’s average market rent for a one-bedroom apartment in 2018 ($1,202), which comes to $962.

When Westbank developers first purchased the site in 2013, they weren’t sure what kind of housing project they would build – condominiums, purpose-built rental or a mix. But after two years of community consultations, it was clear that the neighbourhood wanted rental.

“Increasingly, people are becoming more comfortable with the idea of renting as a lifestyle solution as an alternative to home ownership. Particularly among younger generations, there’s more of a willingness to look at the rental market as a long-term option,” says Anthony DeCarli of Westbank. “Communities want to see purpose-built rentals and developers are responding.”