A semi-detached in North Riverdale sold for $3.1 million, double the average price for the month 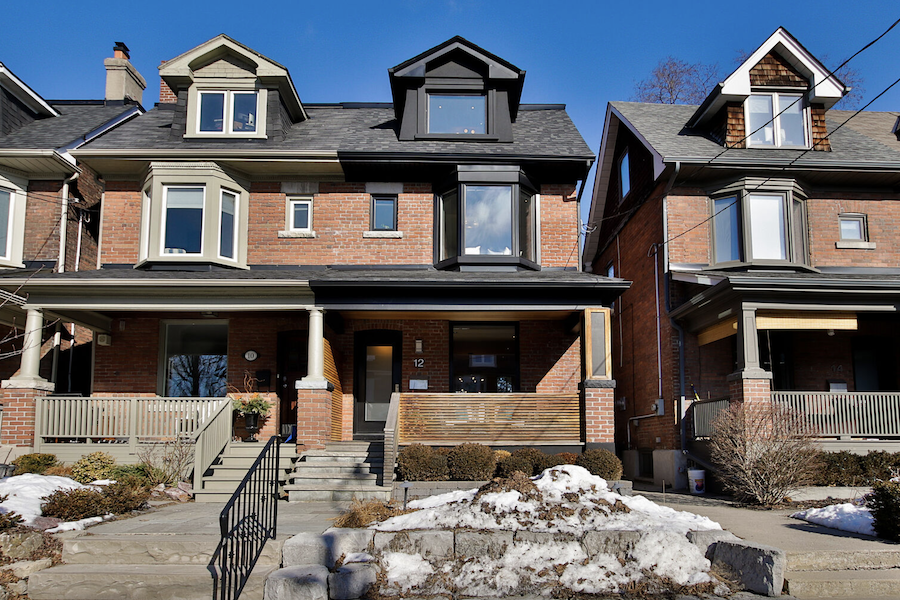 The semi-detached home at 12 Garnock sold for $3.1 million at the end of a record-breaking February.

After reaching new, record-breaking prices in February, Toronto real estate agents say the market may have plateaued. “I think we’re going to see things level out,” says Odeen Eccleston, broker of record at WE Realty, explaining that a mad rush to purchase semi-detached or detached properties in February will now give way to buyer fatigue and perhaps even a slight cooling of prices as more supply hits the markets and COVID-19 restrictions loosen up. Eccleston also feels prices need to plateau or cool down because the current market is simply not sustainable.

A North Riverdale semi-detached home barely occupying 2,000 square feet of land sold for $3.1 million on February 28. The renovated four-bedroom home at 12 Garnock was about to be listed for nearly $2.2 million. But according to selling agent Stephen Braun at Sotheby’s International Realty, a pre-emptive offer came in hours before the property was listed. Braun declined to provide further details on the transaction.

The selling price is a record for the neighbourhood and more than double the February average for semi-detached homes in the 416, which according to the Toronto Regional Real Estate Board (TRREB) was $1,499,489. The average price for a detached home in the city reached $2,073,989. The average price for a home in the Greater Toronto Area (GTA) was $1,334,544, a 27.7 per cent jump from the same average last year.

“Having the interest rate [hike] looming could have also driven more desperation in buyers,” says Meray Mansour, team leader at Meta Realty Group, explaining why February sale prices were higher than ever.

But both Mansour and Eccleston feel like the $3.1 million sale price at 12 Garnock was more of an exception rather than an indication of what semi-detached homes are going for in Toronto real estate.

“Sometimes there’s outliers, where the purchaser really needs to be in that area because their parents are in that area and they need to look after them or they need their parents to help with the kids,” says Eccleston, guessing as to why the buyer might make such a high pre-emptive offer. “The subjective value for them is higher than the market value.”

“You always get that one kind of wild-card buyer who is planning on staying forever,” adds Mansour, describing the person searching for their forever dream home. “And sometimes you get that buyer. Sometimes you don’t.”

Mansour agrees with Eccleston that buyer fatigue is beginning to set in, which combined with the slightly higher interest rates and the improved supply situation will help ease prices.

“I’m seeing more and more listings not sell on the offer presentation date,” says Eccleston. “People are getting a grip and they’re saying, ‘Okay, these numbers are ridiculous.’”

Mansour and Eccleston also also add that with March Break coming and a loosening of restrictions, they expect more people to get out and not bother with Toronto real estate. That seems to be the pattern, says, Eccleston. Whenever we are locked down, spending more time at home, people are spending more on homes.

“Last summer, when the weather got warmer and the restrictions lifted, we saw prices level out because people were travelling for the for the first time in a while, people were enjoying their lives.

“Semis might very well be worth $3 million on average in the next several years,” Eccleston adds. “But for now, I really do think that we’ve reached a plateau.”