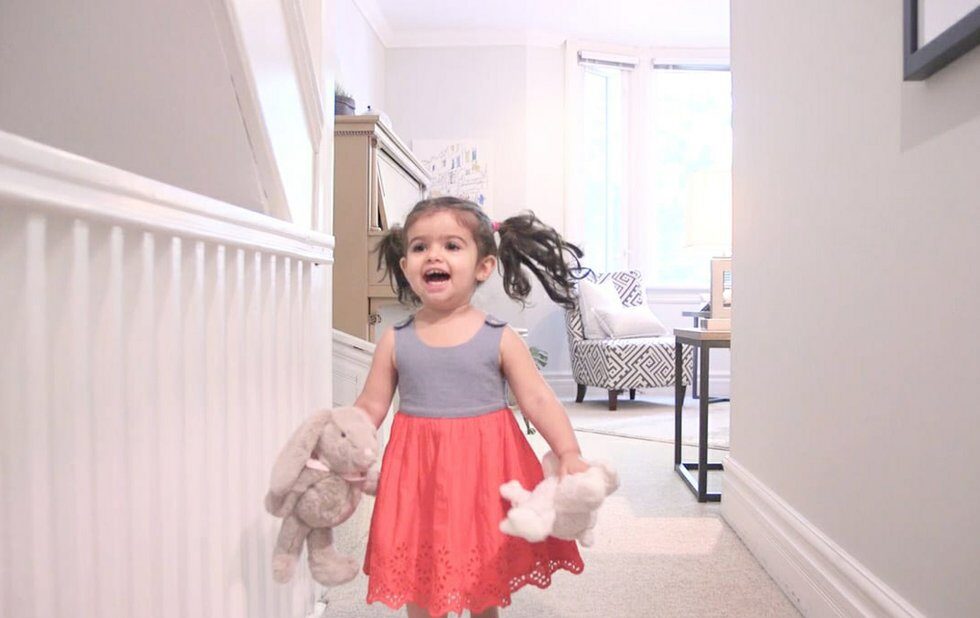 A little girl runs through a Leslieville semi-detached in realtor Karyn Filiatrault's video, Exalt For Galt.

Two kids race down a leafy street toward a red brick three-storey house. As jaunty stock music plays in the background, the children play hide and seek in the modern home: they take cover in a sculptural soaker tub, scurry down a grand staircase, survey a kitchen complete with enough bottle storage for a burgeoning wine snob.

The film is the brainchild of realtor Suzanne Lewis, who created the three-minute video after the three-storey house with skyline views failed to sell the first time it was listed by a different agent.

When Lewis came on board, she realized she needed to get creative.

“The price point was much higher than what was common in the neighbourhood and it had a unique layout, so I knew the exposure [of the listing] needed to be greater than usual,” she explains.

With that in mind, she suggested a short video that would appeal to her perceived prospective buyer: a young family looking for a quiet property in an attractive neighbourhood. And it worked. The video has been viewed more than 100,000 times and the house sold for just under the asking price at $2.23 million, a near record for the east-end neighbourhood.

In Toronto, real estate videos – from fanciful creations like Lewis’s to straightforward virtual tours – are becoming more popular among realtors looking for a competitive edge in a saturated market.

According to the Toronto Real Estate Board, there are some 48,000 real estate agents working in the Greater Toronto Area. Forget fridge magnets. Some realtors are now doing anything to attract new clients, from throwing “wine and cheese night” open houses to branding ice cream bicycles that pedal around local fairs.

Higher-end properties go even further. Last month, architect and interior designer Dee Dee Taylor Eustace hosted a rooftop garden breakfast for media at her Manhattan-style condo ahead of its market listing. And in 2015, Freed Developments flew in Karl Lagerfeld to promote the Art Shoppe Lofts and Condos, for which he designed the lobbies. (It was the fashion icon’s first time in Canada.)

In Toronto, the original purveyor of the lifestyle real estate film is Karyn Filiatrault. After eight years of working in TV, including producing docs for the Discovery Channel, Filiatrault transitioned into realty. Early into her new career, she realized that in order to stand out amidst all the other eager realtors looking to jump on a hot housing market, she’d need to do something unique.

“If my job is to sell a client’s property, then my job is also to figure out some way to sell it better than the next person in line,” Filiatrault says.

They’re definitely cheesy, but the films do to job, according to Filiatrault.

The first video she ever made helped the condo sell in just four days. Last year, a video for a Leslieville semi-detached featuring a pig-tailed toddler exploring her house (inexplicably with no parents in sight) sold for $167,000 over asking price and has been viewed 12,000 times on Facebook.

But it’s a cost she is happy to incur if the seller is game and it means more prospective buyers will see a property.

Her films aren’t just showing off the space’s amenities, they’re also meant to be aspirational. She tailors each to who she imagines is the prospective buyer, whether it’s young parents or a Bay Street bachelor.

“These films show what life could be like if you lived in this home,” says Filiatrault. “Instead of just some beauty shots where you can turn off the video halfway through, [lifestyle films] work because people want to see the beginning, middle and the end.”

But sometimes viewers stick around for the wrong reasons. Earlier this year, Filiatrault found herself embattled in controversy after one of her clips advertising a luxe downtown penthouse went viral.

The video featured a dutiful wife preparing her husband and his two coworkers a three-course meal. In the process, she clumsily kept spilling food on herself, which required her to slip into multiple dresses throughout the evening.

The video racked up thousands of views, as well as criticism that it was blatantly misogynistic. Filiatrault didn’t see it as sexist, but as light-hearted and compelling.

“There were many opinions about it, which is great because people were paying attention to it,” she says. “I had commentary from all over the country.”

And at the end of the day, the penthouse went for a cool $2.14 million.

Other than building an agent’s own personal brand, some may question why videos are even necessary in a hot seller’s market like Toronto. For David Fleming, a Bosley Real Estate agent and author of the Toronto Realty Blog, it’s more about getting the maximum value of a property for your client.

“These videos aren’t necessary,” says Fleming. “But [a home] is the biggest asset anybody will ever own,” he says. “The stakes are so high. Why wouldn’t you take advantage of new technologies and advertising mediums?”

Indeed, if a four-minute video could help a real estate agent fetch a record-breaking sale, it’s high time to download some upbeat stock music, recruit a couple of cute kids and hire some good-looking models. There’s not just a house to sell – there’s a lifestyle.

This video for a Leslieville semi-detached helped the home sell for $167,000 over asking price.