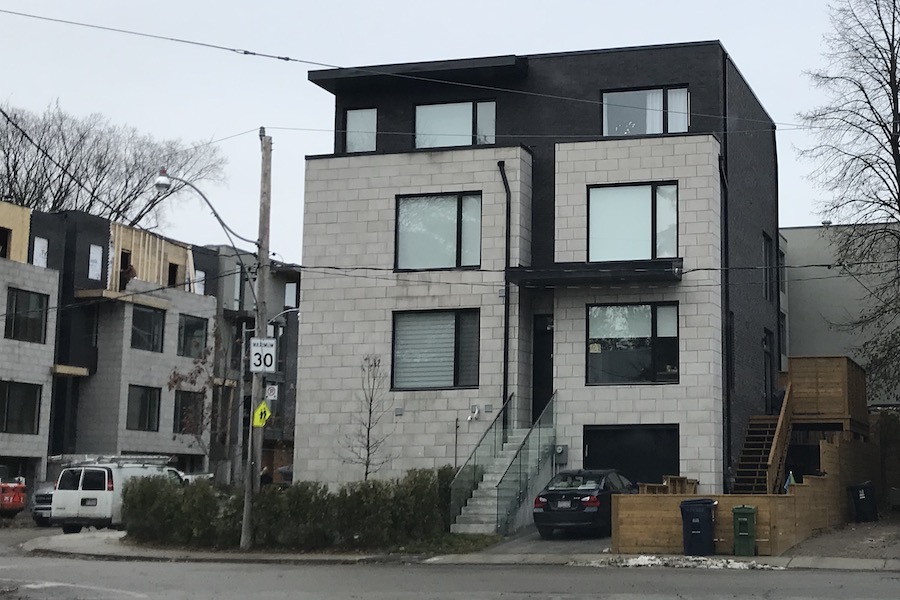 Multi-resident are being built in Leslieville but not without challenges.

The Toronto real estate market has a missing middle problem.

According to Philip Kocev, a broker at iPro realty, the city needs more duplexes, triplexes and stacked townhouse complexes to fill the gap between a saturated high-rise condo market and the semis and detached homes selling at sky-high prices.

He argues that existing land and homes could be utilized to build more capacity if the city amended bylaws and fees for modern needs. That could be an alternative to the Ford government’s steamroll tactics, using Municipal Zoning Orders to bypass the city and sell locations like the Foundry to condo developers.

“We’re really talking about moving multi-unit homes into existing neighborhoods,” says Kocev, referring to areas near the downtown vicinity like the Danforth and Beaches to the east, and Parkdale and Junction to the west.

“You can’t even get a house for under $1.2 million,” adds Meray Mansour, broker at Re/Max Hallmark Realty. “And that’s a house that needs a lot of work. The gap between condos and houses is really quite obvious.”

Both Kocev and Mansour joined the NOW What podcast to discuss the missing middle problem in Toronto real estate and the barriers to potential solutions.

Part of the problem, Kocev says, is a shift in mentality when it comes to Toronto real estate, and how we view our existing structures. He refers to our grandparents’ generation, for whom a lot of the existing homes were built.

“When immigrants came to our country, it was common for them to live in groups of people, multiple families,” says Kocev, adding that we’ve gone in the reverse direction. Now homes built as multi-units that could house six to eight people are gutted and turned into grand single-family homes for four or five.

“Families are actually finding it more necessary to group together to create a community so they can support each other through this time,” adds Mansour, explaining that COVID-19, which is partially spreading in crowded Toronto households, has added more pressure to build multi-unit residences. “I’m seeing a huge demand in this area.”

A rendering of the multiunit residential Philip Kocev and his partner are building in Leslieville.

Both Kocev and Mansour agree that laneway houses and low-rise multiunit residences are a solution. Kocev and his partner are currently building a multiunit property with in Leslieville for rental purposes. He’s turning a detached home on a large lot into four legal units, each approximately 1,200 square feet with separate utilities and entrances.

He realizes that such builds could potentially be sold as separate units for much cheaper than similar-sized $1.2- to $1.5-million units sell for in a downtown condo.

“That will allow people to move into these neighborhoods for less than what the cost of the house is,” explains Kocev.

But then he lists off the challenges: building costs are not economical when you’re talking four units in one location as opposed to one hundred; NIMBYism is strong in desirable neighbourhoods; and commitee of adjustment, park levy and development fees are killer.

“There is a lot of barriers to creating missing middle homes,” says Kocev. “We could do these in such a way that they (is) an incentive for investors to actually build these and sell them.”

Listen to the full conversation on the missing middle on the latest episode of the NOW What podcast directly below.