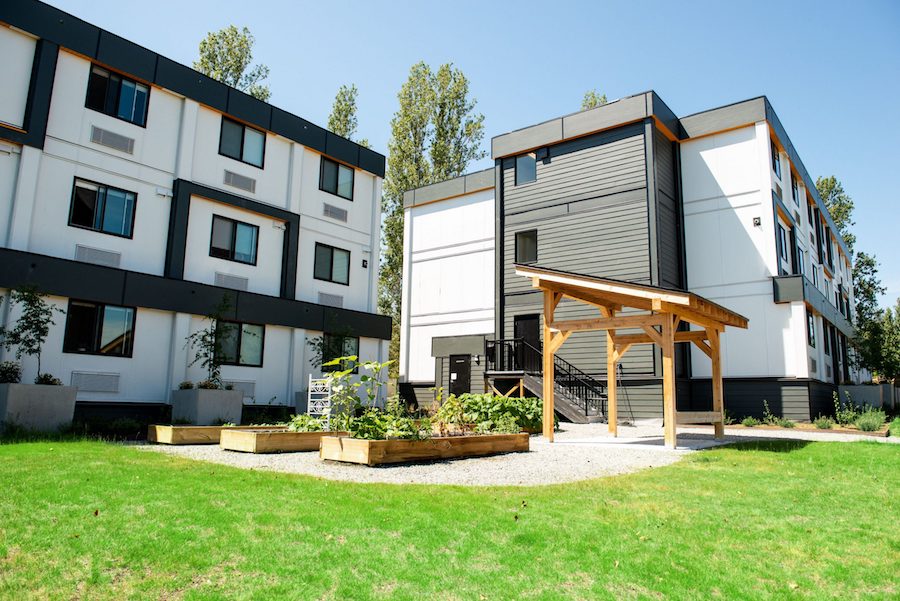 Designed by Horizon North, this modular housing project in Vancouver offers supportive housing for homeless people. Horizon North will be designing the project to be built at Dundas and Dovercourt.

Located at 11 Macey near Danforth and Victoria Park, on-site construction and installation of the 56-unit building will begin this month, with occupancy expected by the fall.

City staff cited the coronavirus pandemic as the reason for fast-tracking the initiative, which also includes another modular housing project slated for Dundas and Dovercourt.

“The current COVID-19 pandemic has quickly amplified the pre-existing challenges within Toronto’s housing and homeless systems,” a city report reads. “[It] has caused considerable added strain on the emergency shelter system largely due to requirements around physical distancing and isolation.”

But residents near the 11 Macey site, many of whom are long-time homeowners, say they were not properly consulted on the project and that it will exacerbate “social problems associated with vagrancy and public intoxication” that are already facing the neighbourhood, due to its proximity to the Beer Store, LCBO and community housing.

The West Oakridge Neighbourhood Association (WONA) formed after learning the city was planning to propose the current green space as a site for the housing project.

“I don’t want to stigmatize anyone, but there are people who have issues with alcohol and drug addiction, and some of them gather in the park here and take up the benches that are meant for the parents watching their kids in the playground,” says Eric Stark, a long-time resident who lives near the site and a member of WONA. “We don’t feel that concentrating even more people, who are possibly struggling with addiction and mental health issues, is a good idea for us in the neighbourhood.”

According to the city’s documents, 11 Macey was chosen based on local demand for affordable housing, size and configuration of the site, development potential, local infrastructure, and access to public transit and community services.

The city says that it does not anticipate any increased public safety issues in the neighbourhood, noting that a nonprofit housing provider will operate the site and offer supports like meal services, primary health care and community services.

Tenants, who will pay around 60 per cent of average market rent, will be selected by the city and nonprofit housing provider with priority given to those who already live or are connected to the neighbourhood.

Hana Yassin, a harm reduction worker and human rights student at York University, lives in the area and says that more affordable housing is urgently needed.

“We have a really big homeless population and the shelters are overcrowded,” says Yassin. “A lot of the clients [I work with] are refused a bed because there aren’t any, forcing people to camp outside, which I think is safer than being in the shelter system where they can’t isolate or social distance.”

Since mid-March, over 617 people in the city’s shelter system have tested positive for COVID-19. Four people have died and there have been 38 outbreaks in shelter sites.

On July 7, homelessness advocates including Sanctuary Ministries of Toronto, Aboriginal Legal Services and Advocacy Centre for Tenants Ontario, filed an enforcement motion, arguing the city of Toronto has failed to comply with commitments to ensure safe shelter conditions during the pandemic.

Yassin says she supports the 11 Macey project, but stresses that it’s important any policies implemented by the no-profit housing provider are designed with the tenants’ success in mind.

“A lot of the temporary housing situations that are being offered come with a lot of rules and policies that put people in a position where they’re going to fail,” says Yassin. “There are places that say you can’t use [drugs] in your unit, or you can’t have someone over, or there’s a curfew.”

WONA has looked into appealing city council’s decision, but learned that the ministerial zoning order has already been approved by the province. They’re currently contacting housing minister Steve Clark and Premier Doug Ford to share their thoughts on the project, noting however that WONA will likely have to “surrender.”

The estimated total project cost is $47.5 million, with $28.75 million coming from the city’s Development Charges Reserve Fund for Subsidized Housing. On average it costs around $2,000 per month to operate a supportive housing unit, while emergency shelters cost nearly double that amount to operate – triple during the current COVID crisis.