The social media generation has boosted the profiles of local artists, who are mostly tattooing by hand at home 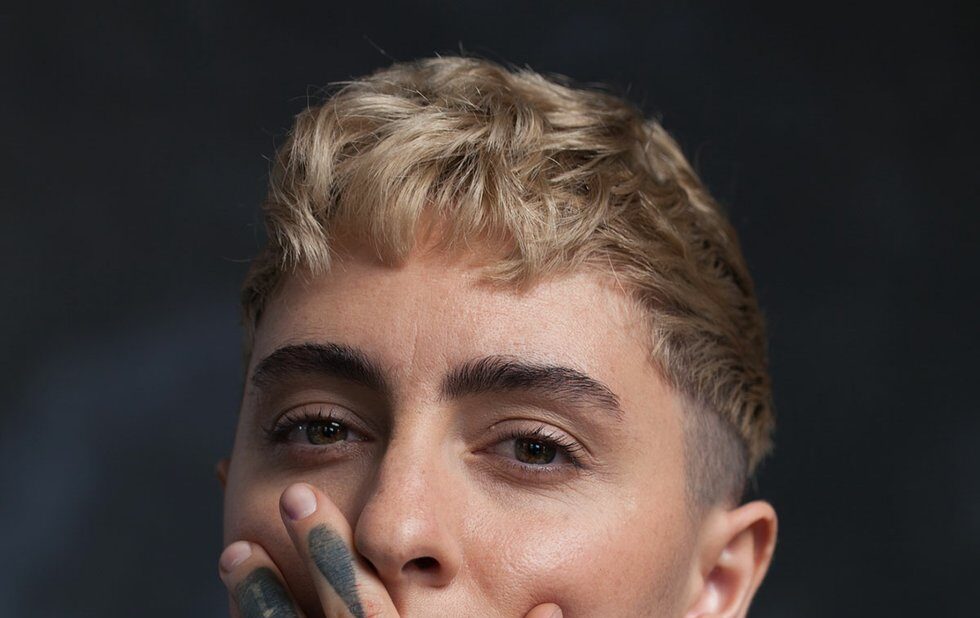 The first tattoo Lee D’Angelo ever got, they gave to themselves. The 27-year-old transgender tattoo artist was 18 at the time, and a friend showed them how to do it using India ink.

“I had an open-heart surgery scar from when I was younger, so I put a bow at the bottom it,” D’Angelo laughs over coffee at the Lakeview. “Looking back, I should’ve probably not used a sewing needle but I didn’t know better at the time.”

D’Angelo’s first tattoo experience is fairly typical among millennials, which might surprise – and worry – health workers and tattoo aficionados of the old guard. When D’Angelo moved to Toronto to attend OCAD a decade ago, practising stick and poke, or hand-poked, tattoos on yourself and your friends was a popular activity at house parties. In fact, all the other stick and poke artists NOW talked to for this story learned how to tattoo similarly: trial by very permanent error.

Eventually D’Angelo, who studied illustration at school, began tattooing paying customers at their home studio. They set up an Instagram account (@rat666tat) three years ago and business took off. Over 16,000 fans now follow their work online.

But despite a growing community of stick and pokers in Toronto, the art form remains relatively underground. Most hand-pokers aren’t welcome at traditional tattoo shops and are forced to work from their homes. Payment is typically in the form of cash – or bartering due to the rise in trading communities like Bunz – and clients skew younger, although still above the age of majority.

D’Angelo figures this has to do with the lingering but inaccurate “prison tattoo” connotations still associated with stick and poke tattoos in North America.

But hand-poked tattoos are the oldest form of tattooing, and still widely practised in many parts of the world. In Japan, traditional tebori tattooing, which is done with a metal needle attached to a long wooden stick, has been performed for centuries. In the Philippines, 100-year-old Fang-Od Oggay is keeping Kalinga tattoo traditions alive, which are done with simple pine needles and soot. Photos of Oggay, who is fully tattooed, were included in an exhibit at the Royal Ontario Museum in 2016.

“If you do them right, you can’t tell the difference between a stick and poke and a tattoo from a machine,” says D’Angelo. They now use both methods, opting for a tattoo machine to complete larger pieces. “Why take nine hours when you can take two?” 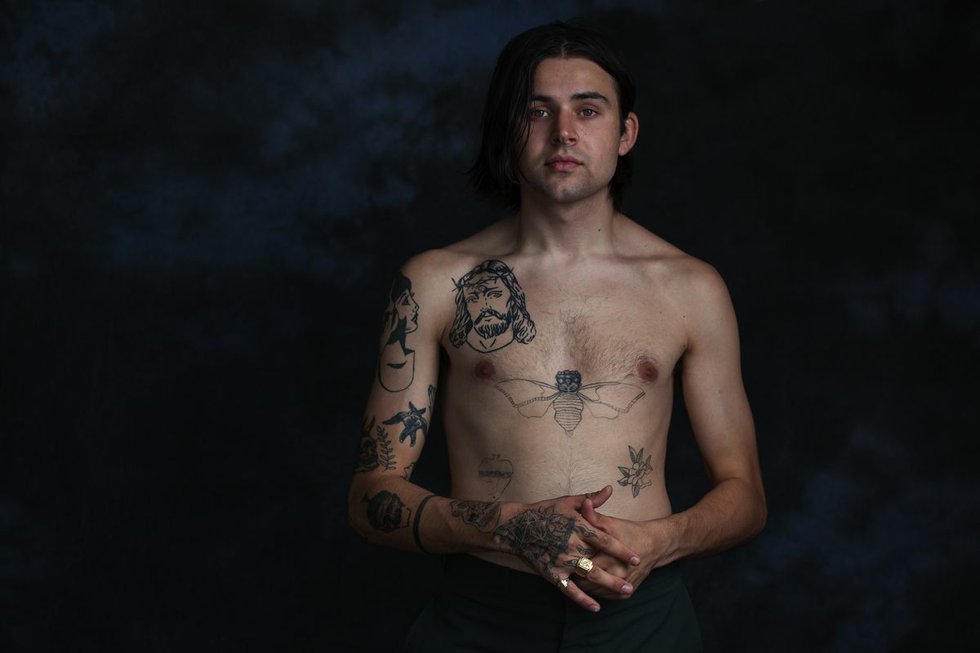 Thane Jardine shows off his collection of tattoos including ones done by machine and by hand.

Thane Jardine, an up-and-coming stick and poke artist agrees. He’s learned to use a machine but says it can be unreliable and break. Over a beer on Ossington, the 22-year-old lifts up his shirt to reveal a half-done tattoo. “This was when a machine conked out on me,” he says. “Plus, I find a more intimate connection with clients when I’m doing things by hand.”

Jardine started tattooing his own body as a teenager and used his skills as a way to barter for food and shelter while backpacking around Europe in 2015. After apprenticing at a shop in South Korea last year, where he learned to tattoo by hand and machine, Jardine returned to Toronto to work full-time as a stick and poke artist.

Jardine’s Instagram account (@hunk.envy) is still in its infancy. The majority of his clients find him through friends, but he’s hoping to develop his online following and benefit from the power of social media. 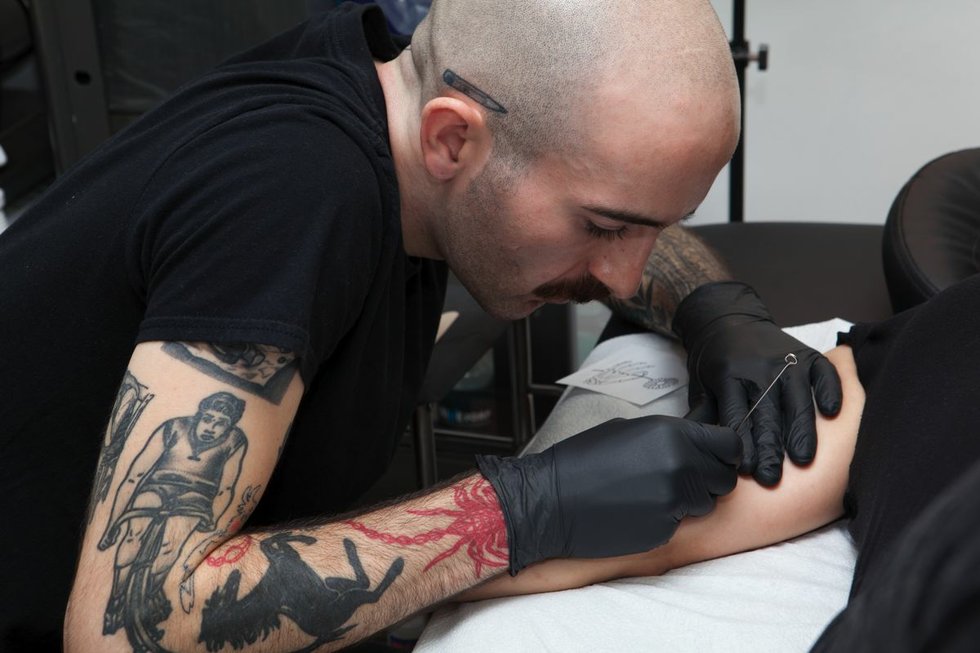 Alex Royce, whose favourite pieces to tattoo are skeletons and skulls, works out of his home studio in ­Parkdale.

Alex Royce, who goes by @alexroycetattoo on Instagram, saw his tattoo career take off after he started sharing his portfolio on social media. The Parkdale resident began doing stick and poke tattoos professionally two years ago. This year, demand for his work was so high, he quit his other side gigs to tattoo full-time from his home studio.

“I think stick and poking has really just come up with the younger generation and mainly with social media,” he says, while tattooing a daisy onto my right bicep one evening. “Part of the reason I think it’s so popular is because it feels more rebellious than just walking into a tattoo shop and getting a machine tattoo. A lot of the time, stick and pokers work from home, and that’s a little bit edgier than going into a tattoo shop.”

Royce says most of his clients are under 30 and tend to be women and queer folks. He thinks that’s because marginalized groups often don’t feel comfortable in traditional tattoo shops full of “a bunch of bros blasting metal music.” 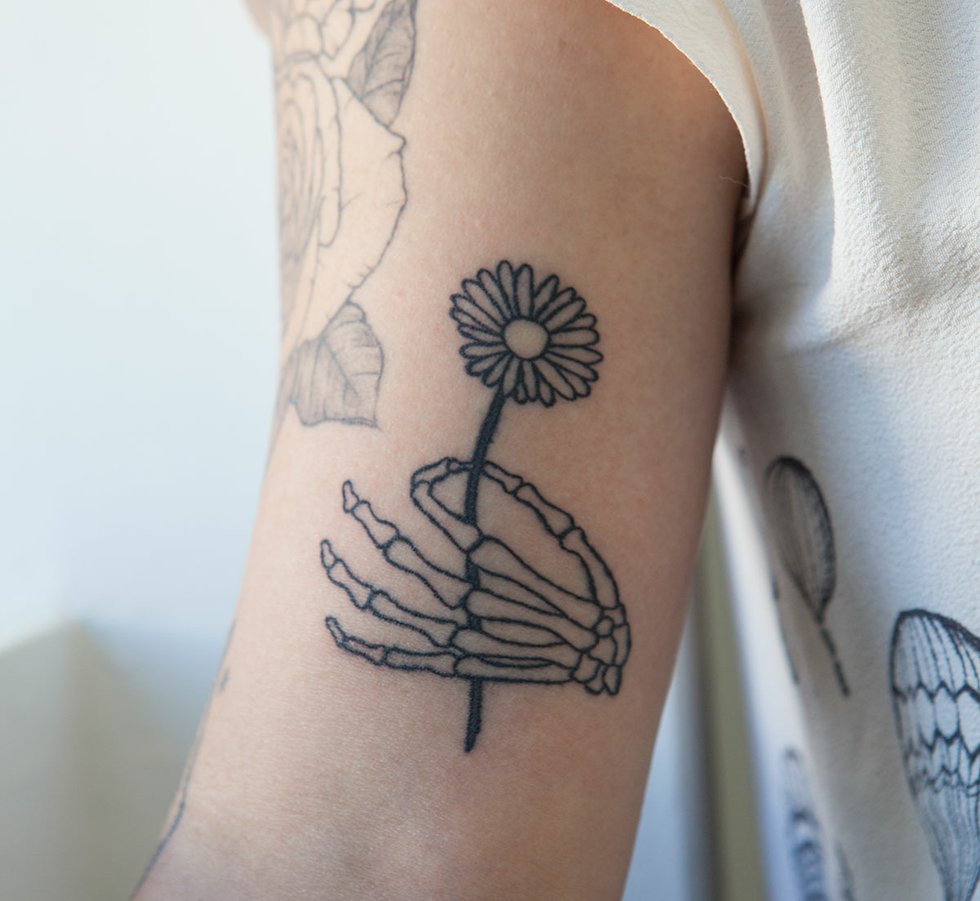 A completed stick and poke piece by Royce of a daisy held by a skeleton on NOW’s Michelle da Silva.

He’s hoping to help change this culture by co-opening a new tattoo studio in the back of TKVO, a queer-owned-and-operated lifestyle and gift shop on Dundas West. Royce and D’Angelo, who previously created artwork for TKVO, are currently getting all the licences required to open a commercial tattoo parlour next month.

“I feel like there’s a real demand for it from the queer community,” D’Angelo says, who has developed a reputation for tattooing queer and feminist imagery. “The thing that matters to me most is giving people a safe space to get something highly personal done. A group of outsider and queer people are gaining a lot of recognition and really changing the face of what a tattoo experience could be like, and I think maybe as a result mainstream tattooing has to change.”

Don’t miss the rest of our tattoo issue:

The overthinker’s guide to getting your first tattoo

tattoos This week in NOW feature