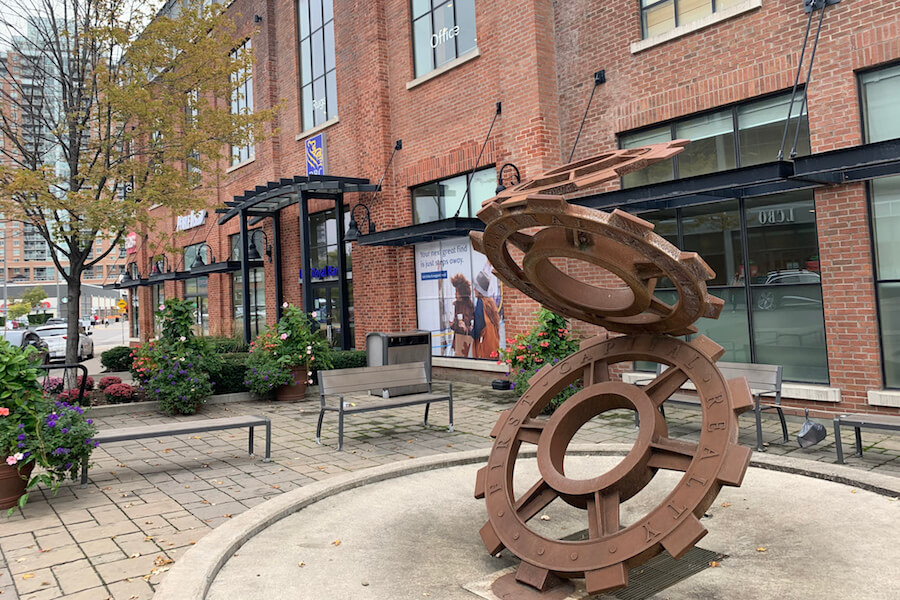 The once charming area is now a concrete wasteland.

If Dante were writing his Inferno today, Toronto’s Liberty Village would warrant its own circle of hell. It would be populated by soulless condo developers and the 30-something sheeple living in the buildings’ box-like units. What was once a handsome west-end industrial area has had all the life choked out of it – especially in the eastern part closer to Strachan.

I figured I’d begin my walk near the official Liberty Village sign, which is so underwhelming it seems like an afterthought. At least it’s in the neighbourhood’s nicest area, which has maintained its industrial look and feel, much like the Distillery District on the opposite side of the city.

But as you walk east things get increasingly more modern… and more crowded.

The Toronto Carpet Factory buildings are among the only pleasant aspects of Liberty Village.

What is there to do and see?

The Toronto Carpet Factory buildings north of Liberty between Mowat and Fraser are stunning. They’ve maintained their red brick exterior, and there are lanes and courtyards to wander around and appreciate details like wrought-iron railings and old-fashioned windows. There’s even an outdoor stone ping pong table within the complex. The buildings are only a few storeys high, so pedestrians don’t feel overwhelmed. There’s a helpful map of the historic buildings painted on the side of a building at Liberty and Fraser.

Along and south of Liberty are various companies like SiriusXM, Insight Productions, Kobo and Zoomermedia, which has its own complex and the MZTV Museum of Television. I’ve seen several site-specific plays in this area (Late Night, Athabasca, The Life And Death Of Fred Herko) over the past few years, and the addition of a permanent, multi-purpose theatre would add some much-needed cultural interest to the village.

North of Liberty is the massive Lamport Stadium, practice field for the Toronto Argonauts and partial home to various rugby teams. There’s so little green space in the village it’s a shame it’s not an open park. Last summer, the police violently removed homeless encampments next to the stadium; what remains is a little children’s playing area.

The Liberty Village BIA has installed public art throughout the neighbourhood. Some pieces, like Po Chun Lau’s 2007 sculpture Spirits, get lost amidst the urban clutter. The painted oblong blocks also look like they’re trying too hard to be interesting. More successful is a series of painted iron benches reflecting the area’s history.

Because it’s bordered on all sides – Dufferin to the west, King and the train tracks to the north, Strachan to the east and the Gardiner Expressway to the south – Liberty Village does, in fact, feel contained like a village. Too bad it lacks character.

The main thing it needs is a centre. The Lamport could have been it. The parking lot at 15 Hanna could also be it; from there you get a nice view of everything around it, including the Liberty Market Building. Imagine if this parking lot were underground and the square were open; what a great place it would be to gather.

North of East Liberty and east of Atlantic is the neighbourhood’s second-worst feature: a suburban-seeming strip mall with shops to supply residents with stuff for their cramped condos (EQ3, Kitchen Stuff Plus), food for their pets (Global Pet Foods) and themselves (Metro) and banks to help finance their 450-square-foot palaces (too many to mention).

Although there are some unique food and retail places – Organic Garage on Hanna, Big Rock Brewery on Liberty – the neighbourhood is rife with fast-food joints: Pizzaville, Harvey’s, Tim’s, Booster Juice. This separates it from the classier Distillery. One of the saddest sights in the area is the Popeye’s beneath a historic smoke stack.

East of Atlantic, the fact that there are no exits to the south or north means you’re forced to go east towards Strachan. If this were a wide, lively street with interesting shops, that would be fine. As it exists now, traffic (both car and pedestrian) is funneled straight through to Strachan.

Condo developments like this, on East Liberty, create a feeling of confinement.

Which brings us to the neighbourhood’s worst feature: the condo developments in the southeast. While not as tall as the buildings at City Place, the condos are clumped together and generic. And because the north and south are blocked off, you feel especially cramped.

Liberty Village Park, across from a big chunk of the development, is a sad patch of green offering nothing to look at except a brutal piece of sculpture and other condos.

Liberty Village Park, one of the rare green spaces in the neighbourhood, provides little relief from the concrete jungle.

The neighbourhood feels so dehumanizing the city has currently posted a sign saying they’re “undertaking a study to address the need for more open space and community services and facilities resulting from significant residential and commercial growth.”

Um, good luck with that.

After being trapped in a concrete jungle, I suddenly craved open spaces. No wonder so many hipsters congregated at nearby Trinity-Bellwoods Park during the first wave of the pandemic. l bet that floppy hat girl lived in Liberty Village.

28 responses to “Toronto walk: Liberty Village is a hellscape”