"Making the world greener, one auto show at a time," promised the official press release announcing details of this year's. 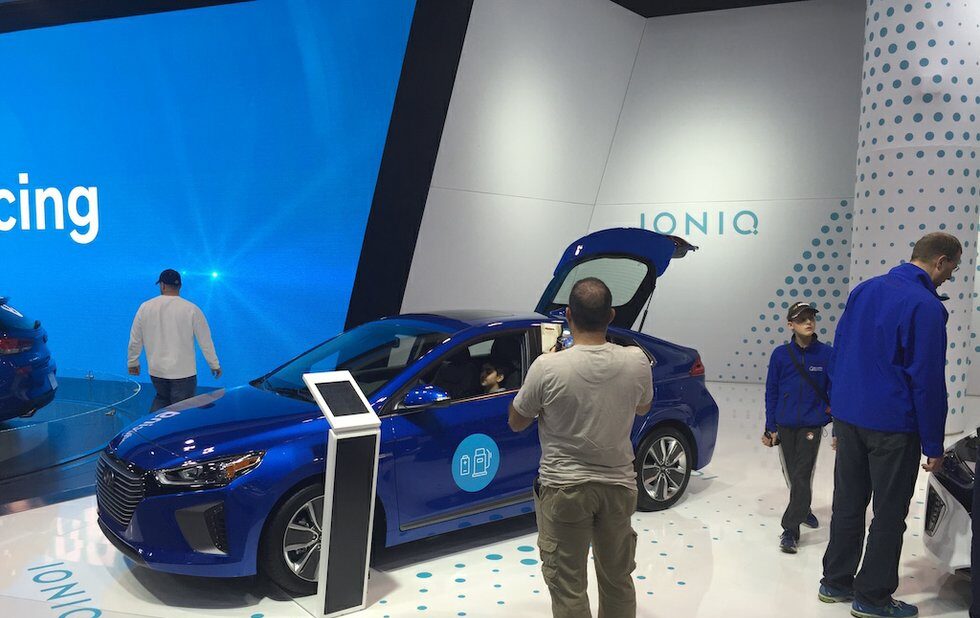 “Making the world greener, one auto show at a time,” promised the official press release announcing details of this year’s Canadian International AutoShow at the Metro Toronto Convention Centre.

But with only 30 hybrid, electric and hydrogen cars among the more than 1,000 vehicles at this years event its evident green is still a PR exercise for most of the industry.

The shows “Electric Avenue” collection of plug-ins and concept cars feels a little ghettoized in a sea of shiny fossil-fuelled cars. Its tucked under an escalator, way past the Dodge Ram bursting out of a poster of a mountain. The future is here somewhere, but the space has a forgotten 1970s vibe.

In the main showroom, meanwhile, Ford has its green fleet quite literally hidden behind a wall.

One car company rep confesses that theyre all waiting to see how well the new Chevy Bolt sells (it’s the extended range version of the Chevy Volt) before sinking more time and money into better electric technology.

Last year almost a third of all plug-ins sold in this country were Volts, but competition is steadily rising. There are now 34 different plug-in models registered in Canada, according to online e-car platform FleetCarma, including the Kia Soul EV, the new Hyundai Ioniq and Smart Fortwo Electric.

Notably, Smart is one of the rare brands thats choosing to ditch gas-powered engines and go wholly electric in Canada and the U.S. by 2018.

Under Ontarios newly beefed-up incentives for electric cars (you can score up to $14,000 in rebates, the most generous on the continent), a Smart Fortwo Electric is actually cheaper than the gas-powered version.

Canadians are far from embracing the electric car. But curiosity is starting to translate into sales. We bought 56 per cent more electric cars in 2016 than we did the year before, with a record-breaking 11,000 vehicles sold last year. According to a FleetCarma report, the total number of EVs in this country is now just under 30,000.

Still, were no Norway, where 37 per cent of new cars are electric and the government just pledged that all cars on its roads will be electric by 2025.

Ontarios target is less ambitious: were gunning for 5 per cent by 2020 and 12 per cent by 2025, but those targets are voluntary. Quebec is the only province in Canada sort of getting tough with automakers, mandating that 3.5 per cent of all auto sales be electric, plug-in hybrids or hydrogen fuel cell by 2019, rising to 15.5 per cent by 2025. And if car companies dont sell enough, theyll have to buy credits from automakers that do.

Clearly, the auto industry needs to take its foot off the gas pedal. But south of the border, the Auto Alliance (repping the top 12 car and truck brands) just asked the Environmental Protection Agency to roll back Obama-era emissions standards.

One report surveying 1,000 auto execs suggests the industry may be waiting on fuel cell electric cars (FCEVs-) to knock out battery-based EVs (known as BEVs).

The faith in FCEVs can be explained by the hope that they will solve the recharging and infrastructure issues BEVs face today, says the report. The refuelling process can be done quickly at a traditional gas station, making recharging times of 25 to 45 minutes for BEVs seem unreasonable.

Of course, theyll first have to figure out how to keep hydrogen fuel cells from freezing in Canadian winters first, say Hyundai and Toyota reps. Regardless, the future is here, whether automakers are ready or not.