Lights Out keeps you in the dark 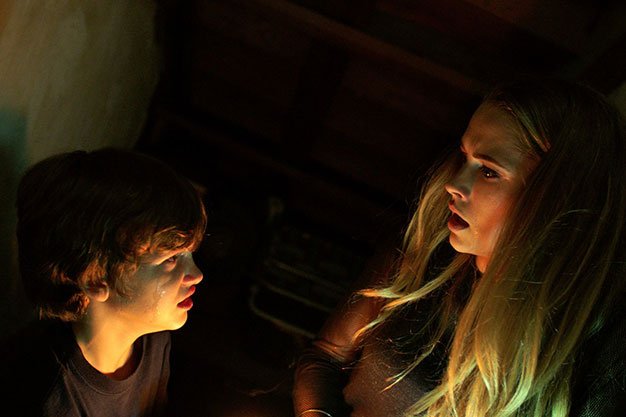 The short film Lights Out made terrific and terrifying use of a flickering bulb, a figure in the shadow and snappy editing. With a gimmick that runs its course in under three minutes, it did not need to be made into a feature.

We have one anyway, with near identical scenes recreated and buried in an otherwise fright-less and muddled effort. The movie pads the story, while the thrills bleed out.

As with the original, people must flee towards the light from a banshee that can only creep in the shadows. Here, the monster is called Diana (Alicia Vela-Bailey) and she has a ridiculously laboured and completely unnecessary backstory to explain her issues with photosynthesis and the family she preys on. It’s all conveniently laid out in a box full of photos, voice recordings and mental ward case files for Teresa Palmer’s Rebecca to quickly digest – like, “Yep. Fuck. We’re haunted.”

Palmer, recently seen bathing in light in Terrence Malick’s Knight Of Cups, is a formidable presence here, but she’s crippled by a sloppy and tone-deaf script. It scores laughs when trying to be serious with emotions and psychology.

And the movie is very nearly stolen from her by Rebecca’s lovestruck and slightly dopey boyfriend (Alexander DiPersia). He’s got a hilarious smackdown with the shadow boxer. It’s the only scene that comes close to the inventiveness of the short film and it runs under three minutes as well.